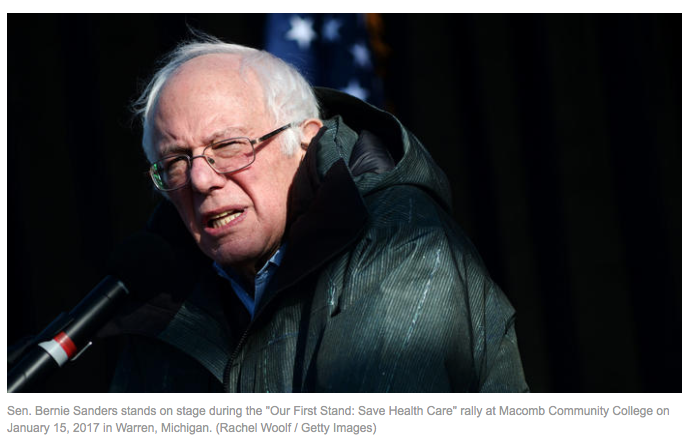 Democrats and labor organizers spent Sunday at dozens of rallies across the country, pledging to fight in Congress against the repeal of the Affordable Care Act and any attempt to change Medicare or Medicaid. The party’s leaders faced crowds ranging in size from dozens to thousands of people, urging them to call Republicans and protest the push for repeal.

“Nobody’s gonna shut us up! Nobody’s gonna turn us around!” said Sen. Tim Kaine, D-Va., the Democrats’ 2016 vice-presidential candidate, at a rally in Richmond that drew a crowd of at least 1,000. “We’re standing in the breach and battling for tens of millions of Americans!”

“Our First Stand,” the catchall theme for the protests, represents one of the the earliest protests by an opposition party against an incoming president. Brainstormed by Sen. Bernie Sanders, I-Vt., and Democratic leaders in Congress, each rally introduced crowds to men and women who had faced death or bankruptcy before the ACA went into effect, then challenged Republicans to listen to their stories. Rattled during the ACA’s passage by tea party protests and raucous congressional town hall meetings, Democrats were flipping the script.

“The immediate goal of the rallies is to show Republicans that the majority of people are against repealing the Affordable Care Act,” Sanders said in an interview this week. 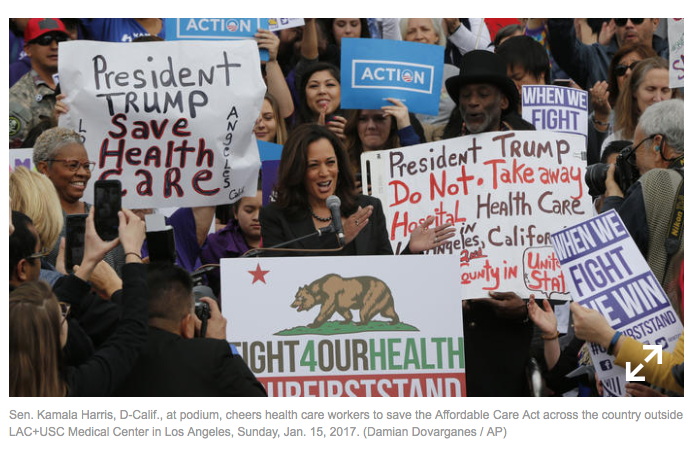 “I think people are waking up to the fact that the Affordable Care Act has been helping tens of millions of Americans,” said Sen. Chris Van Hollen, D-Md., after a rally in Bowie, Maryland, organized by Maryland Democrats that drew 1,500 people. “Energizing the public around a common goal can have an important result.”

In Bowie, a number of rally attendees said they were also planning to join the Women’s March to be held in Washington, D.C., the day after Trump’s inauguration. Some lifted unofficial signs from Sanders’ 2016 primary campaign; others said they had been galvanized by the election itself.

Valencia Danner, 23, said that the Bowie rally was her first political event of any kind. Scott Gledhill, 73, said that he’d voted for Gary Johnson for president but was worried about Republicans’ plans regarding the ACA and Medicare.

“Two months after aging into Medicare, I got diagnosed with pancreatic cancer,” he said. “My bill would have been half a million dollars. I would have lost everything I had, after a whole lifetime of work and saving.”

The rallies also demonstrated how the party’s restive left is shaping its response to Trump. Some activists rallied while chastising the Democrats who had voted against an amendment to the Republicans’ repeal resolution that would have made it easier to import prescription drugs from Canada. In Bowie, some of the loudest cheers came when Rep. Jamie Raskin, D-Md., said he “might end up voting to impeach” Trump, and one activist interrupted House Minority Whip Steny Hoyer and urged him to “boycott the inauguration” like Rep. John Lewis, D-Ga. 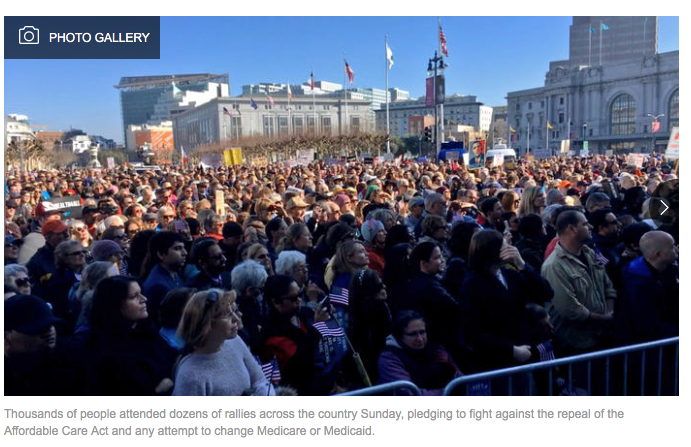 “John Lewis and I are going to be doing our job on the floor,” said Hoyer, evading the question. (He is not planning to skip the inauguration.) “We had an election, and over 2 million more people voted to keep the Affordable Care Act than to repeal it.”

Sanders himself headlined a rally of more than 10,000 people in Michigan’s Macomb County. The county, made up of suburbs of Detroit that voted for Barack Obama twice and flipped to Donald Trump, has become an emblem of the shifts that shocked Democrats and lost them the presidency. Before and after Sanders spoke, Sen. Debbie Stabenow, D-Mich., and leaders of local unions defended the ACA itself — but then added that reform might mean something more progressive.

“How about a public option? Single-payer?” said Stabenow, referring to two progressive plans that would effectively expand Medicare to younger people. “We’ve got things we can do.”

Sanders, who as a candidate called for on an ambitious, European-style reform of the health-care system, used his own speech to renew that call.

“Our job today is to defend the ACA,” Sanders said. “Our job tomorrow is to bring about a Medicare-for-all, single-payer system.”

Those plans were non-starters during the 2009-2010 congressional debate on health care. Since then, however, losses in conservative states and districts have moved the Democratic Party to the left, and the surprise defeat of Hillary Clinton has made Democrats question the political power of incremental, compromise-built policies.

But for all Democrats, the immediate policy threat is to the existing Affordable Care Act. In Bowie, leaders distributed lists of Republicans to call and urged people to call their relatives in red states to get them to join the cause. Van Hollen suggested that repeal could be stopped entirely if three Senate Republicans could be turned against it.

In Richmond, after the choir from Kaine’s church sang “We Shall Overcome,” the senator had the same message. He described the late-night drama of last week’s budget “vote-a-rama,” which saw Democrats lose vote after vote to defend the ACA.

“We wouldn’t sit down! We wouldn’t shut up! Because this isn’t business as usual!” Kaine said. “Why don’t we just jump off a cliff, then we’ll figure out how to land while we’re in mid-air? That’s what they’re saying.”

At the rally in San Francisco, Silvia Pena, a 45-year-old nanny, said she had never had held insurance until she enrolled in the Affordable Care Act six years ago.

“I don’t have health issues, but you can need insurance any time. We should all have access to health services,” said Pena, who held a sign that read “It’s our right and our body. Keep Planned Parenthood and Obamacare.”

About 2,000 people cheered and held rainbow and American flags and signs that read “Don’t Make America Sick Again” and “Health Care For All” at the rally. Patients who survived cancer, strokes and other health difficulties are sharing stories on how they benefited from the mandated health insurance.

In Los Angeles, organizers of the rally outside the LA County/USC Medical Center warned that a repeal of the law without a replacement will throw the state’s health care system into chaos and strip coverage from 5 million Californians.

The Washington Post’s Gregory Schneider and the Associated Press contributed to this report.

Chicago Tribune WP: Sanders, Democrats rally thousands across the country to save Obamacare added by Peter Lance on January 17, 2017
View all posts by Peter Lance →