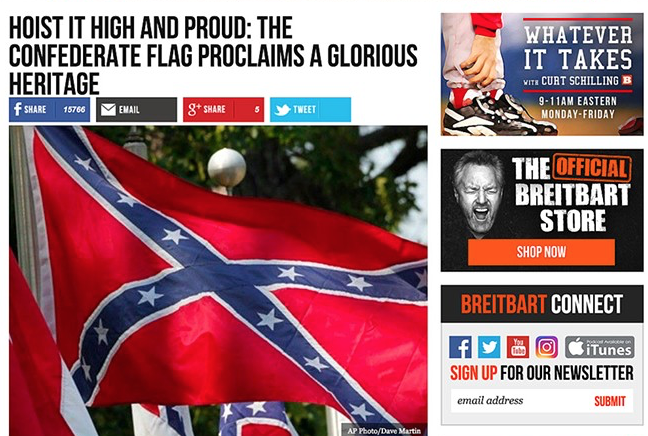 As leader of Breitbart News, Steve Bannon carried the banner for the firebrand wing of the conservative movement online. Bannon oversaw the caustic bomb-tossing of editor Milo Yiannopoulos who was eventually banned from Twitter for marshaling legions of harassing social media trolls. Bannon published “Hoist it High and Proud” two weeks after nine people were shot to death in Charleston by a Confederate flag-worshipping white supremacist. Bannon was the mastermind of a presidential campaign enthusiastically backed by white supremacists.

This weekend, Steve Bannon was hired to set the political and strategic course for the Trump White House.

In the column posted on July 1, 2015, two weeks after the Emanuel AME killings in Charleston, while Bannon served as Breitbart chief executive, writer Gerald Warner praised the Confederate flag’s “glorious heritage” and called the Confederacy “a patriotic and idealistic cause.” The author called Republicans who spoke out against the flag as “weaklings.” Ten days after the post, Gov. Nikki Haley signed a bi-partisan bill to remove the Confederate flag from outside the Statehouse. Strom Thurmond’s youngest son was among the measure’s supporters.

Discrimination watchdogs like the Anti-Defamation League, the Southern Poverty Law Center, and the Council on American-Islamic Relations have decried Bannon’s hire as public white supremacists have applauded Trump’s choice. In 2007 court statements made by Bannon’s ex-wife, he reportedly said he didn’t want his daughters going to school with Jewish students and under Bannon, Breitbart News developed into an “online haven for white nationalists.” Even conservative commentator Glenn Beck has said Bannon is one of the “most dangerous” figures in American politics.

The appointment puts Bannon in the same position previously held by David Axelrod and Karl Rove, both of whom led candidates into their two-term presidencies. A press release yesterday said that Bannon and RNC Chairman Reince Priebus, tapped as White House chief of staff, will serve as “equal partners.”

City Paper: Man who published “Hoist it High & Proud” after mass shooting will be top Trump adviser added by Peter Lance on December 26, 2016
View all posts by Peter Lance →