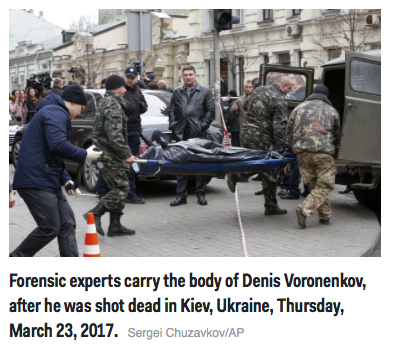 A Russian lawmaker and critic of Russian president Vladimir Putin who defected to Ukraine late last year was shot dead in Kiev at around noon local time on Thursday, multiple media outlets have reported.

Denis Voronenkov, a former member of the Russian state Duma, or parliament, had obtained Ukrainian citizenship in October in exchange for agreeing to testify against former Ukrainian president Viktor Yanukovych.

Yanukovych was ousted in early 2014 amid violent protests and fled to Russia, where he is now living under the protection of the Kremlin. CLICK IMAGE for link to story.

Voronenkov told RFERL’s Chris Miller in February that he had told Ukrainian prosecutors “some details of what was going on” with Yanukovych when he fled to Russia, “and I will give testimony in open court in the course of judicial inquiry held in Ukraine.”

“I will talk about criminal deeds of the former president, which led to the ongoing bloodshed in [the eastern Ukrainian] Donetsk and Luhansk regions,” Voronenkov told Miller last month.

Voronenko had been walking to meet with Ilya Ponomarev, another former member of the Russian Duma who was the only lawmaker to vote against the annexation of Crimea in 2014.

“Denis Voronenkov was killed at 11:25 at the Premier Palace,” Ponomarev, who also defected to Ukraine, wrote on Facebook on Thursday.

“He was coming to meet with me. No words. The guard managed to wound the attacker. The theory is obvious — I said that Voronenkov was not a crook/cheater/phoney, but an investigator, who was fatally dangerous to Russian siloviki [security services]. My deepest condolences to [Voronenko’s wife] Maria Makasakova.”

Ukraine’s president, Petro Poroshenko, confirmed in a statement on Thursday that ” Voronenkov was one of the main witnesses of the Russian aggression against Ukraine and, in particular, the role of Yanukovich regarding the deployment of Russian troops to Ukraine.”

Poroshenko added that he was treating the attack as “an act of Russian state terrorism,” although police have still not determined who was behind the assassination.

The attacker, who has not been named, was shot and injured by police and has since died from his wounds, Ukrainian media has reported.

Ukraine’s prosecutor general, Yuri Lutsenko, called the attack “the usual kind of Kremlin retribution,” according to The Guardian.

“Putin respects enemies, but he has no time for traitors,” Russian-born journalist Julia Ioffe tweeted on Thursday.

Voronenkov has his own enemies in Ukraine, especially because he is believed to have voted in favor of annexing Crimea in 2014. He called the annexation “a mistake” and “illegal” in his February interview with Miller, and denied that he had voted for it.

Voronenkov’s death is the second suspicious incident this week involving critics of Vladimir Putin. Nikolai Gorokhov, the lawyer who had been investigating the death of Russian lawyer Sergei Magnitsky — who died in prison in 2009 after claiming that the Kremlin conspired with Russian criminals to launder $230 million — was thrown from the window of his fourth-floor Moscow apartment on Tuesday.

Russian state media reported that Gorokhov, who has been hospitalized with serious head injuries, had fallen while trying to move a bathtub into his apartment, but the circumstances surrounding the incident remain unclear.

Business Insider: ‘An act of Russian state terrorism’: Russian lawmaker and Putin critic who defected to Ukraine shot dead in Kiev added by Peter Lance on March 23, 2017
View all posts by Peter Lance →