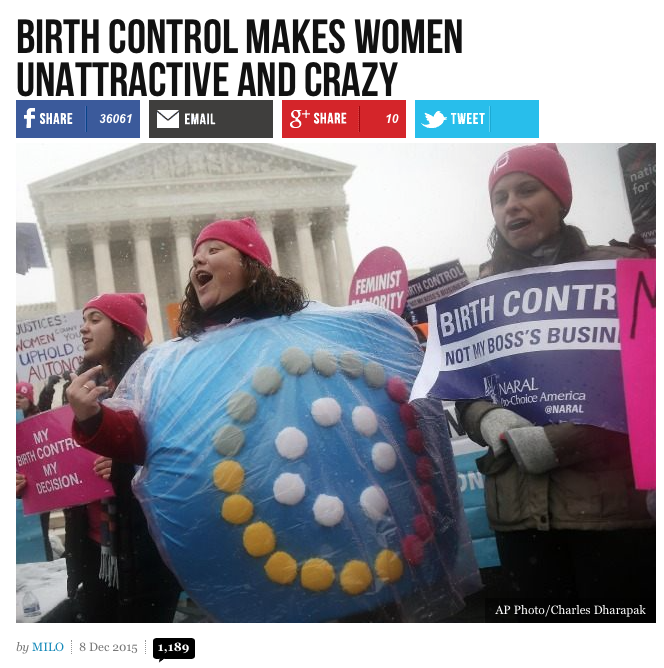 By Milo 8. Dec 2015. The media never stops banging on about women’s health, particularly in the wake of the disgusting revelations about Planned Parenthood. They’re always telling us that “women’s bodies” and “women’s choices” should be paramount. But just how healthy are the solutions to unwanted pregnancy that they propose?

Ladies — I’d like you to imagine that you are Neo from the popular film franchise The Matrix. For the purposes of this thought experiment, I am Laurence Fishburne, except with really good hair, a charming personality, and of course I’m much blacker than he is.

In one hand I hold a pill that lets you see the truth, even if at it first it is very bitter. In the other I hold a pill that you have to take every day and it will keep you from getting pregnant at the low cost of turning you into a hideous monster.

Ask yourself before continuing: are you ready for the truth, or do you want to continue turning yourself into Gollum for the benefit of not having to practice any sexual responsibility at all? Okay, different movie franchise, but you get the idea.

God-fearing nutcases like me have long argued that birth control, like abortion (or “the murder of children,” if you prefer), is the work of the Devil. Like all things discouraged by the Bible, it leads only to misery and suffering — for young men as well as women.

Now, assuming you’ve chosen the right pill, I can prove with the power of science that religious folk were right all along and that science has a little-known but undeniable Roman Catholic bias.

Let’s start with the grossest form: injectable birth control. IT MAKES YOU FAT. A 2009 study from the University of Texas found that women using DMPA gain an average of 11 pounds over three years, a 3-4 per cent increase.

Worse, this was abdominal fat, which is linked to cardiovascular disease, strokes and diabetes. 25 per cent of women on DMPA experienced “significant and potentially dangerous body composition changes.” Yes, that’s right. They became dangerously fat. On the bright side, they’re able to stop the injections at that point because being fat is the best form of birth control anyone could ask for.

So in other words, your birth control injection will add on pounds that will prevent the injection you really want — of man meat.  This, in turn, will lead to depression and excessive ice-cream consumption, which adds on more pounds. Eventually, you’ll find yourself in what medical professionals call “a vicious cycle” but what I call FFAS, or “Female Forever Alone Syndrome.”

It’s not just your body that will get less sexy. Your voice will lose its seductiveness too. Women sound most attractive to men when their estrogen levels are high, and their progesterone levels are low. Birth control lowers the former and raises the latter, making women sound as erotically appealing as Bruce Jenner giving a croaky acceptance speech.

If you think the man of your dreams will be eager to meet you after that first Skype call where you sound like a lumberjack, keep dreaming. Men trust their senses and will create a mental picture of you long before you meet. Do you really want to be labelled a pity lay, betrayed by your whacked-out hormones? No you do not.

Women on the Pill don’t look right and don’t talk right. What could be worse? Well, they can’t jiggle correctly either. A study from the University of Göttingen in 2012 gauged the attractiveness of female dancers. Men judged fertile women as more attractive dancers — and even walkers — than women in their non-fertile phase.

The researchers speculated that estrogen fluctuations during a woman’s fertile period can affect muscle, ligament and tendon strength, leading to subtle differences in movement. Fertile gals, in other words, have all the right moves.

The rougher elements in society will talk about a woman’s posterior — or mine — and describe the way a quarter might bounce off it. Birth control’s estrogen enroachment is liable to have that coin ricocheting off into someone’s eye or just slowly sinking in (see cottage cheese, below).

It’s already established that going on the Pill makes you less attractive to men. But it also affects who you’re attracted to as well. Healthy, fertile women seek out men who are genetically different to them. Women on the Pill do the opposite, seeking out men who are closer to their own tribe. That’s right, ladies: the Pill turns you into Lannisters. I understand lusting after close relations might be a positive thing in some locations, such as West Virginia, or Norfolk, so YMMV on this one.

BIRTH CONTROL MAKES YOU UNSEXY ALL THE TIME

Don’t be fooled into thinking that birth control only makes you stupid and unattractive during your fertile periods. Although studies have found that female strippers make an average of $70 an hour during peak fertility, versus $35 while menstruating and $50 in between, women on the Pill averaged $37 — just two dollars more than a menstruating woman — and obviously had no performance peak for periods of fertility. To put it as one of my beloved rappers might: to make Wall Street, you gotta be in heat.

If you’re dropping hints to a man who doesn’t even know you exist, it might be because according to his brain, thanks to your birth control, you’re as attractive as a post-menopausal cat lady.

BIRTH CONTROL MAKES YOU A SLUT

It’s well established that women lust after rugged, manly men during their fertile cycles, and prefer baby-faced “provider” types outside this period. Indeed, this alternating pair of desires is the leading cause of female infidelity. However, imagine how accentuated this process is with women on the Pill.

A single month of it would be enough to have even the most loyal woman deliberately tripping attractive men and falling on top of them… regardless of affirmative consent. Be aware lads, if she’s on the Pill, you’re probably getting cucked — unless you’re dating a polyamorous third-wave feminist, in which case you’re getting cucked no matter what birth control method is being used (and let’s be honest, it’s probably abstinence).

Birth control has a knock-on effect on men, too. During ovulation, women are more likely to be critical of unsexy men. This, of course, is vital to the health of masculinity. Female nagging is, of course, 90 per cent pointless noise, but the 10 per cent that occurs during an ovulation cycle is what men should listen to, because it could help them be more manly. Of course, if your woman’s on the Pill, you won’t hear it at all.

(This one is a stretch, I know, but I’ve added it for the sake of completeness. As far as I can tell most women are hysterical hypercritical harpies towards their boyfriends and husbands the vast majority of the time. Man am I relieved to be a fag right now.)

Cellulite is the stuff of nightmares. It’s the ugly, dumpling-like ridges you see on the thighs of overweight women. It’s true some fellows like thick girls these days, but cellulite will slam the brakes on any guy’s lust.

But did you know that cellulite didn’t exist before the Pill? According to The Scientific American, pictures of women with cottage cheese thighs are almost impossible to find prior to the 1970s. That doesn’t necessarily mean the Pill is responsible, of course: other factors like increasingly sedentary lifestyles and the rise of fast food might have been responsible.

THE PILL MAY HAVE DESTROYED THE INSTITUTION OF MARRIAGE

Take a look at the graph below. It’s divorce rates in the U.S., overlaid with the rise of the pill. 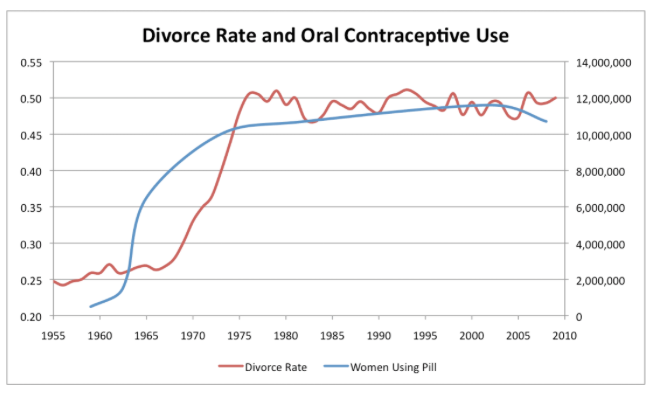 Exactly why there is such a close correlation between the rise of the Pill and the rise of divorce rates we can’t say with total certainty, but the relationship is stark. Possible explanations include: a lack of children leading to fewer reasons for couples to stay together, and… all of the items mentioned on the list above.

Of course, if your darling wife has been on the Pill for the last five years of your union, you’ve never actually met her in her true form. When she finally stops dosing, you will be faced with a woman who has spent the last half-decade not learning how to deal with the Twilight Zone insanity endemic to the female brain.

When she comes off the drugs, be prepared for all your worst nightmares to come true. You literally just asked an addict to go cold turkey.

Now, you may be asking what I would have women replace the Pill with, since it’s obviously so awful. Condoms? Vasectomies? The answer is: nothing. We need the kids if we’re to breed enough to keep the Muslim invaders at bay.

Tossing out birth control isn’t just kinder to women, it may be the only way to save civilisation. Sorry, no offence, but it’s true. And hey! It’s what God wants, too.