By Peter Lance on December 5, 2018Comments Off on NYT: Robert Mueller and His Prosecutors: Who They Are and What They’ve Done

Robert S. Mueller III, the special counsel, has marshaled prosecutors, F.B.I. agents and other lawyers to investigate Russia’s 2016 election interference and whether any Trump associates conspired. The team has secured indictments against dozens of people and three companies, one trial conviction and a handful of guilty pleas in the highest-profile political inquiry in a generation. This week alone, Mr. Mueller and his prosecutors accused Paul Manafort, President Trump’s former campaign chairman, of breaching his plea deal, and secured a guilty plea from Michael D. Cohen, Mr. Trump’s former personal lawyer. 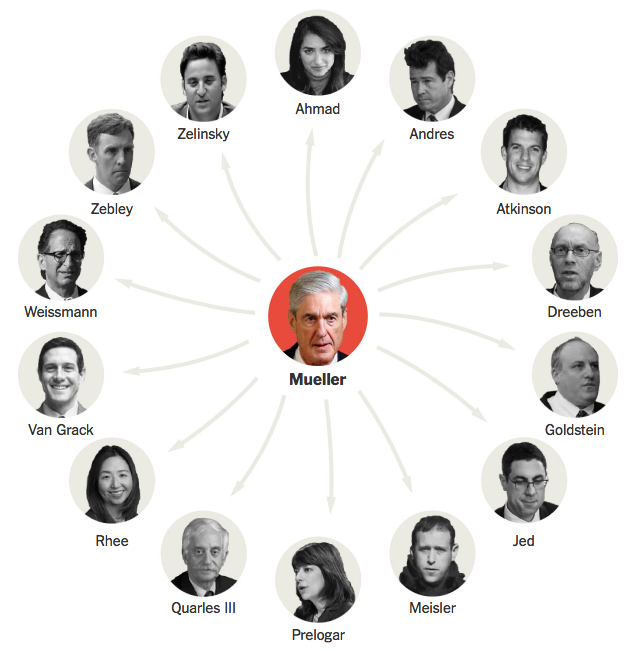 Each of the core prosecutors has a specialty, like political corruption, hacking or money laundering, many of which have featured in indictments. They come from familiar places: the Justice Department’s criminal division, federal prosecutors’ offices in New York and around Washington and a law firm where Mr. Mueller worked

The makeup of the team has shifted as prosecutors and others have departed and some aspects of the investigation are wrapping up. Here is a guide to the key prosecutors and what we know so far about the cases they worked on.

Mr. Mueller has pursued a basic set of questions: How did Russia, on the orders of President Vladimir V. Putin, wage campaign to illegally influence the 2016 presidential race? Did any Trump associates conspire with Russia’s interference? Has President Trump tried to obstruct the inquiry?

Mr. Mueller was also authorized to investigate any potential crimes he came across in conducting the investigation. He won a conviction and guilty pleas from two top Trump campaign aides, Paul Manafort and Rick Gates, for hiding their income from consulting work for a pro-Russian former leader of Ukraine and other crimes. Mr. Gates and three others also pleaded guilty to lying to investigators, and Mr. Manafort was accused of lying to prosecutors after agreeing to cooperate with the inquiry.

The special counsel’s office has also referred several high-profile cases to other federal prosecutors, including part of the inquiry into Mr. Cohen, and three cases related to foreign lobbying.

Here are some of Mr. Mueller’s cases, and which prosecutors are involved. 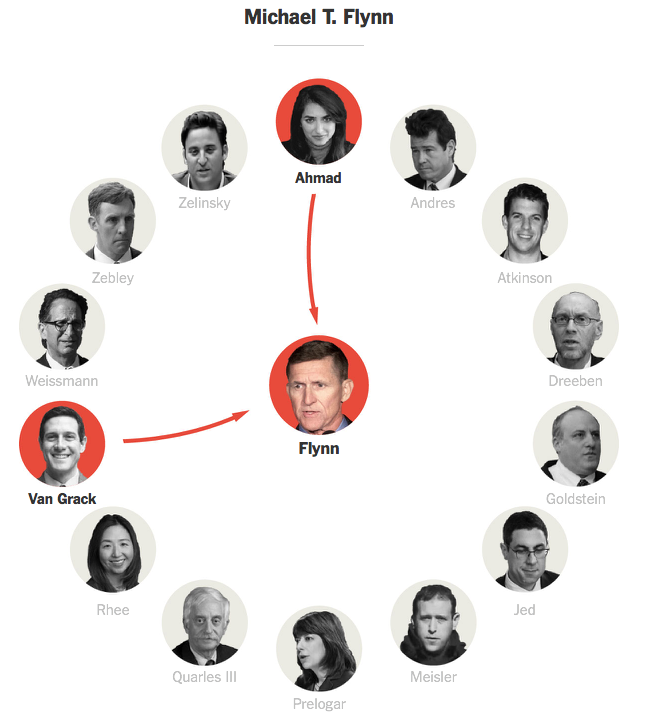 Mr. Flynn, tapped as the president’s first national security adviser, asked Russia’s ambassador to the United States in late 2016 that the Kremlin hold off on escalating in response to sanctions imposed by the Obama administration over election interference.

Mr. Flynn was ousted from his job after only three weeks and admitted to lying about those conversations to F.B.I. agents during the first days of the Trump administration. 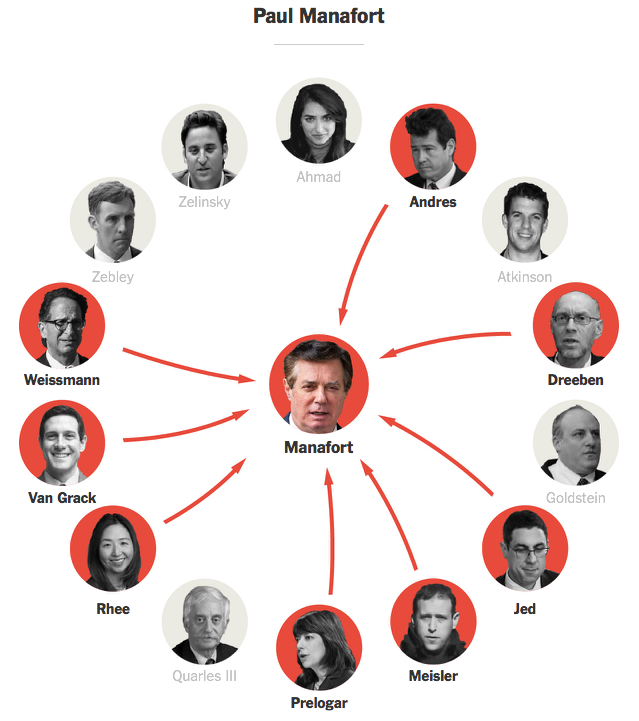 Mr. Manafort, the former Trump campaign chairman, was convicted at a financial fraud trial stemming from his earlier work as a consultant for the pro-Russian former leader of Ukraine. On the verge of a second trial, Mr. Manafort agreed to cooperate with the special counsel’s investigators and pleaded guilty to two additional conspiracy charges, but Mr. Mueller later accused him of breaching his plea deal by lying to prosecutors. Mr. Manafort’s right-hand man in Ukraine, Konstantin V. Kilimnik, a Russian Army-trained linguist accused of having ties to Russian intelligence, has also been indicted on a slew of charges, including money laundering and conspiracy against the United States. 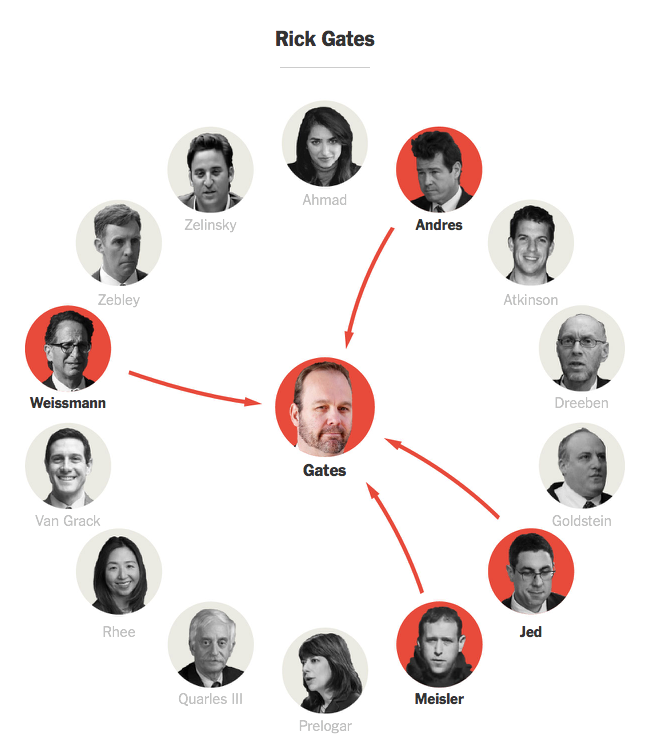 Mr. Gates was a longtime business associate of Mr. Manafort, who brought him aboard the Trump campaign. Like Mr. Manafort, he was also indicted on bank and tax fraud charges related to their work in Ukraine and ultimately pleaded guilty to two felonies and agreed to cooperate with investigators. 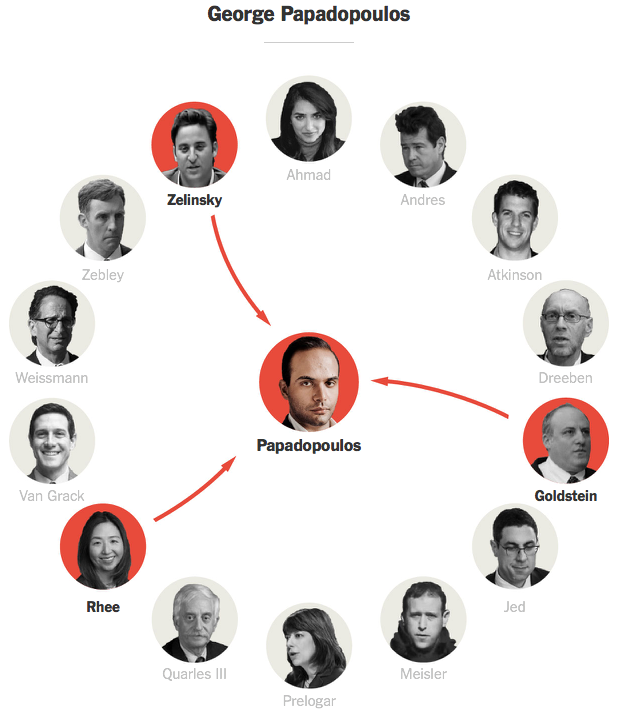 As a foreign policy adviser who lived abroad for months during the presidential race, Mr. Papadopoulos played only a bit part in the Trump campaign but a notable role in the Russia investigation. His spring 2016 meeting with an Australian diplomat in London, where he described his contact with a Russian middleman, triggered the F.B.I.’s investigation into Russian election interference. Mr. Papadopoulos was sentenced to 14 days in jail for lying to F.B.I. agents in the case. 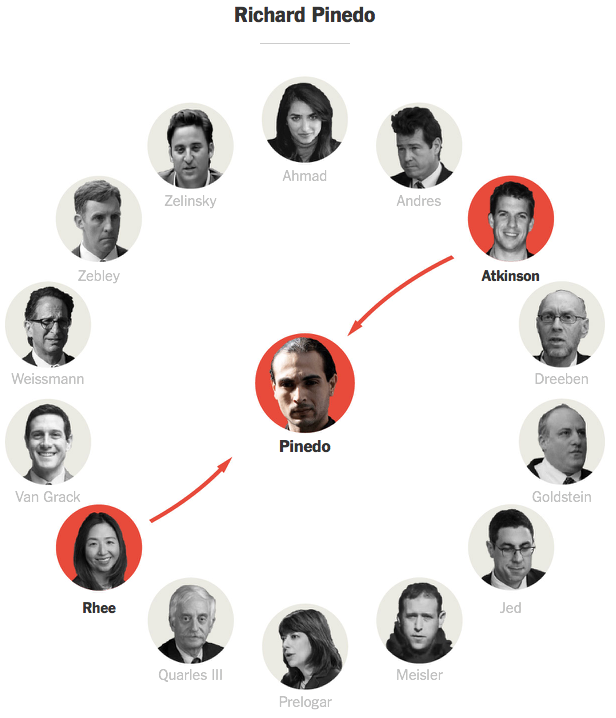 Mr. Pinedo unwittingly helped Russia wage its social media influence campaign by selling bank account information that helped the Russians and others to bypass safeguards to gain access to online financial networks. He was sentenced to six months in prison and six months of home detention. 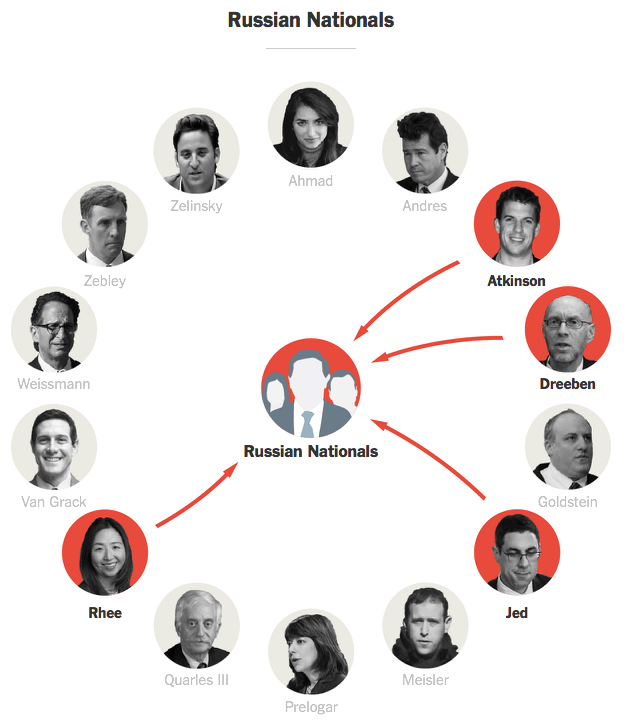 Two groups of Russians have been indicted: a network of 13 people and three companies accused of using social media to sow discord among voters and amplify the American political divide. They also posed as political activists and stole the identities of Americans, according to court papers.

The second indictment accused 12 Russian intelligence officers in the hacking of the Democratic National Committee and Hillary Clinton’s 2016 presidential campaign. 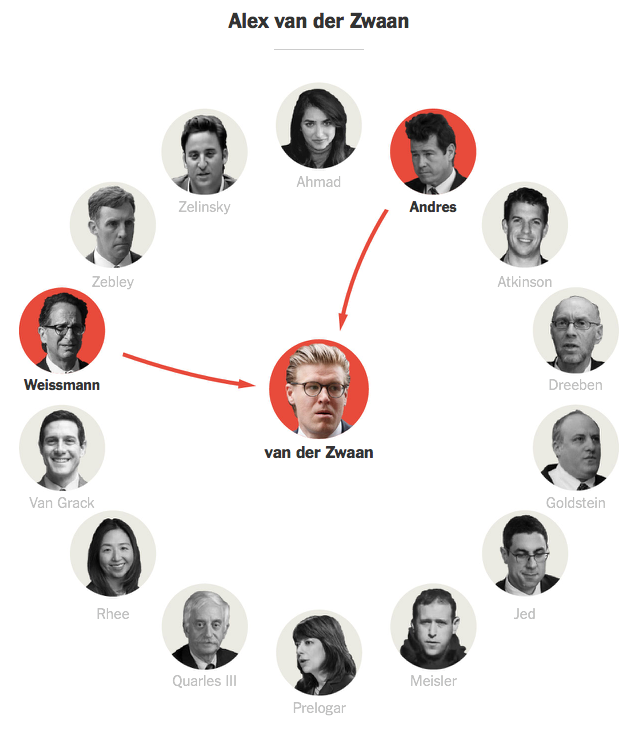 Mr. van der Zwaan, formerly a lawyer for the powerful international corporate law firm Skadden, Arps, Slate, Meagher & Flom, pleaded guilty to lying to federal investigators who were interviewing him in their investigation of Mr. Gates. Mr. van der Zwaan was the first person sentenced in the investigation and served 30 days in prison. 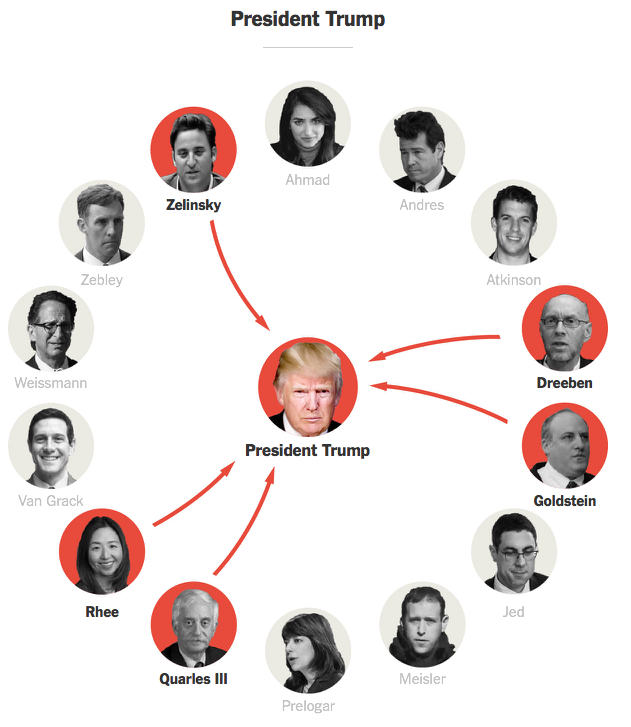 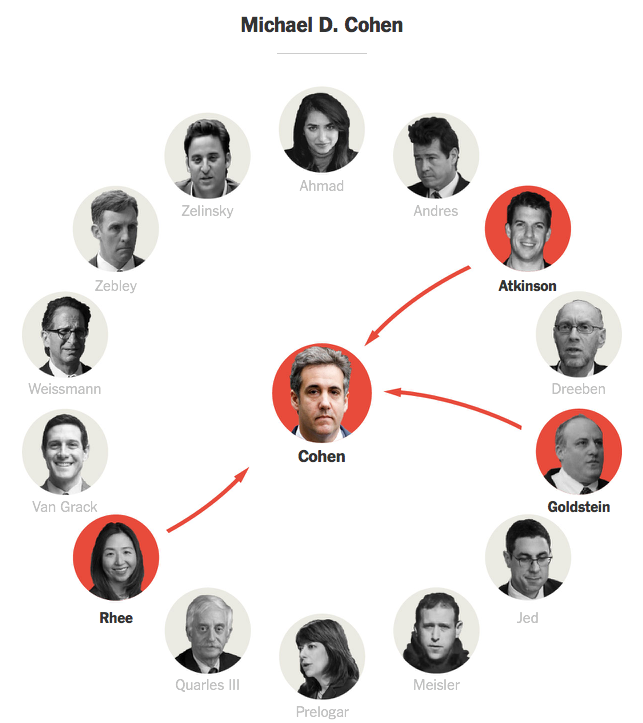 Mr. Cohen pleaded guilty to lying to Congress about his pursuit of the building of a Trump Tower in Moscow, a project that extended well into the 2016 presidential campaign. He also admitted that he had briefed members of the Trump family about those discussions, and that he had minimized Mr. Trump’s role in pursuing a deal. Mr. Cohen agreed to cooperate with the special counsel’s office, which could win him a lighter sentence. 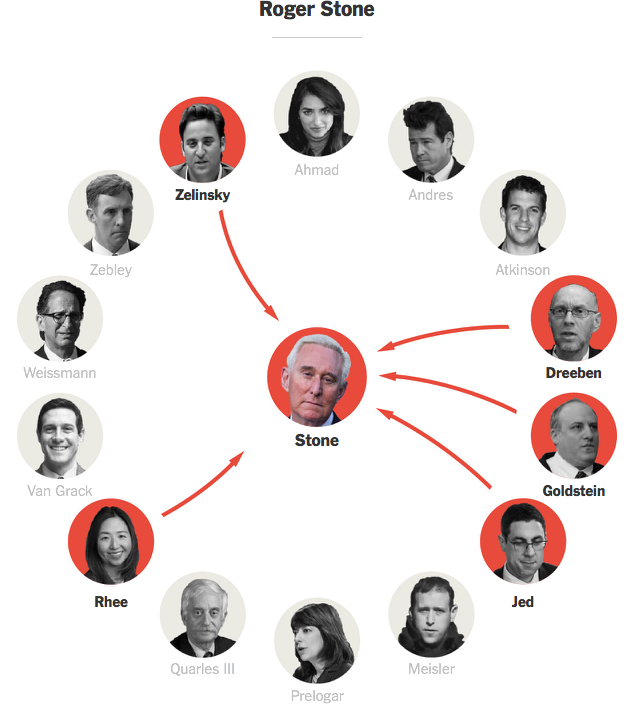 Mr. Mueller is examining whether Mr. Stone knew ahead of time about WikiLeaks’ 2016 releases of stolen Democratic emails. Mr. Stone made comments that appeared to indicate he knew about the plan before the emails were made public.