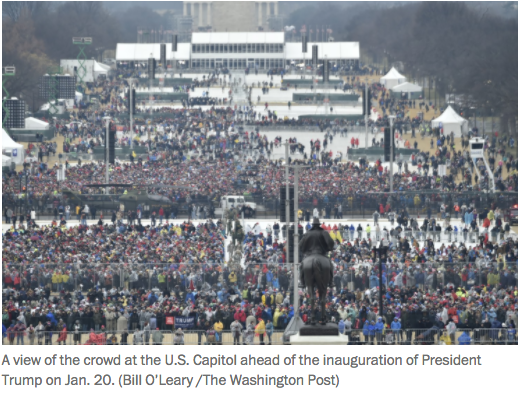 By Karen Tumulty and Juliet Eilperin January 26 at 7:42 PM

In a Saturday phone call, Trump personally ordered Reynolds to produce additional photographs of the previous day’s crowds on the Mall, according to three individuals who have knowledge of the conversation. The president believed that the photos might prove that the media had lied in reporting that attendance had been no better than average.

Trump also expressed anger over a retweet sent from the agency’s account, in which side-by-side photographs showed far fewer people at his swearing-in than had shown up to see Barack Obama’s inauguration in 2009.

According to one account, Reynolds had been contacted by the White House and given a phone number to call. When he dialed it, he was told to hold for the president.

For Trump, who sees himself and his achievements in superlative terms, the inauguration’s crowd size has been a source of grievance that he appears unable to put behind him. It is a measure of his fixation on the issue that he would devote part of his first morning in office to it — and that he would take out his frustrations on an acting Park Service director. 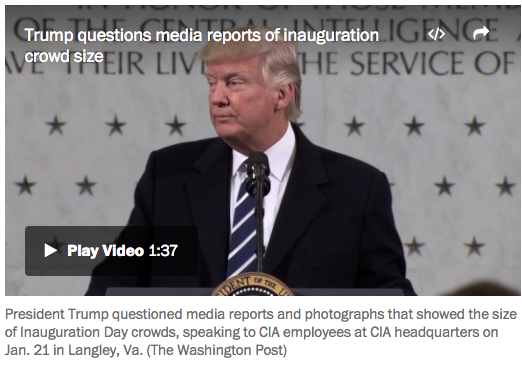 Word rapidly spread through the agency and Washington. The individuals who informed The Washington Post about the call did so on the condition of anonymity because of the sensitive nature of the conversation.

Neither Reynolds nor the Park Service would talk about it.

White House deputy press secretary Sarah Huckabee Sanders said the call simply demonstrated that Trump’s management style is to be “so accessible, and constantly in touch.”

“He’s not somebody who sits around and waits. He takes action and gets things done,” Sanders said. “That’s one of the reasons that he is president today, and Hillary Clinton isn’t.”

On Saturday, the same day Trump spoke with Reynolds, the new president used an appearance at CIA headquarters to deliver a blistering attack on the media for reporting that large swaths of the Mall were nearly empty during the event. 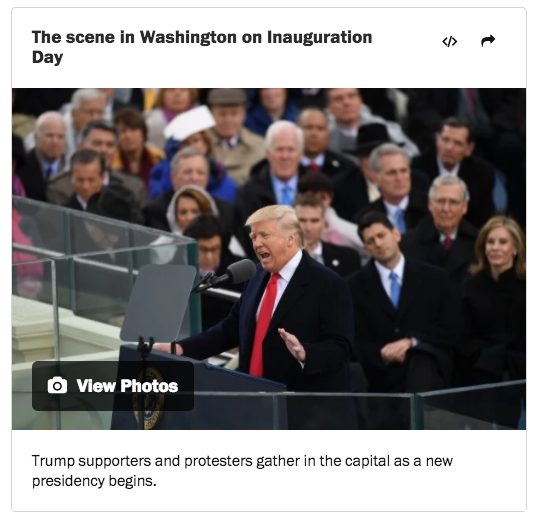 “It looked like a million, a million and a half people,” Trump said, vastly inflating what the available evidence suggested.

Later that day, White House press secretary Sean Spicer reiterated Trump’s complaints about media coverage of the crowd in a tongue-lashing from the lectern of the briefing room.

“These attempts to lessen the enthusiasm of the inauguration are shameful and wrong,” Spicer said.

The Park Service does not release crowd estimates. Experts, however, have estimated that the 2017 turnout was no more than a third the size of Obama’s eight years earlier.

Reynolds was taken aback by Trump’s request, but he did secure some additional aerial photographs and forwarded them to the White House through normal channels in the Interior Department, the people who notified The Post said. The photos, however, did not prove Trump’s contention that the crowd size was upward of 1 million.

In the days since Trump’s election, the Park Service has become an unlikely protagonist in a battle between the new president and some career government employees.

The trouble began late Friday, when the agency’s official Twitter account retweeted two messages that could be perceived as critical of the new administration: the one comparing the relative crowd size for Trump’s inauguration to that of Obama’s 2009 swearing-in, and another that noted policy pages that had been removed from the White House’s website.

That prompted an “urgent directive” to Interior employees that they “shut down Twitter platforms immediately until further notice,” which was lifted early Saturday morning. Crosson then apologized on Twitter for “mistaken RTs from our account.”

On Tuesday, the Badlands National Park’s Twitter account became a social-media sensation when it posted four tweets in a row about rising atmospheric carbon dioxide concentrations and the threats posed by climate change.

Those tweets were then deleted. An NPS official later explained that Badlands NPS officials learned they were posted by a former employee who still had access to the account, and decided to remove them.

Spicer told reporters this week that White House officials had not dictated any agency to impose new restrictions on public communications and that some federal officials, such as those at the Park Service, were not in compliance with their own department’s policies.

Trump, meanwhile, has continued to press the argument that the media has given a misleading account of the crowds that attended his inauguration.

“I had a massive amount of people here,” the president told ABC News anchor David Muir in an interview Wednesday. “They were showing pictures that were very unflattering, as unflattering — from certain angles — that were taken early and lots of other things.”

Brady Dennis and Lisa Rein contributed to this report.

WP: Trump pressured Park Service to find proof for his claims about inauguration crowd added by Peter Lance on January 27, 2017
View all posts by Peter Lance →