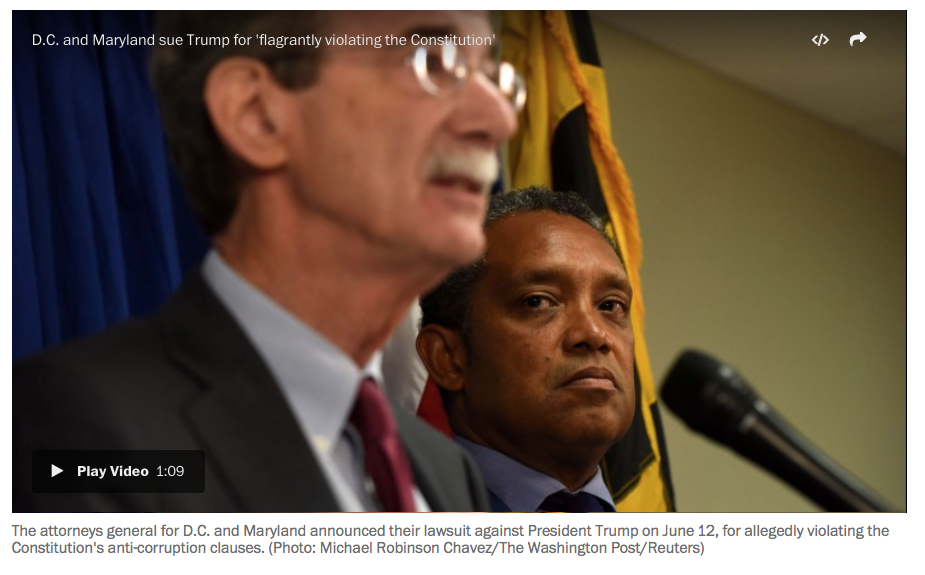 Attorneys general for the District of Columbia and the state of Maryland sued President Trump in federal court on Monday, alleging that payments by foreign governments to his global business empire violate anti-corruption provisions in the Constitution.

Trump’s decision to retain ownership in his businesses “calls into question the rule of law and the integrity of the country’s political system,” according to the suit filed by D.C. Attorney General Karl A. Racine (D) and Maryland Attorney General Brian E. Frosh (D).

At a news conference, the two said Trump is “flagrantly violating” the Constitution’s emoluments clause, which prohibit U.S. officeholders from taking anything of value from foreign leaders. The conflicts of interests are so vast, Frosh said, that Americans cannot say for sure whether Trump’s actions on a given day are taken in the best interest of the country or that of his companies.

“Constituents must know that a president who orders our sons and daughters into harm’s way is not acting out of concern for his own business,” Frosh said. “They must know that we will not enter into a treaty with another nation because our president owns a golf course there . . . [or] change our trade policy because the foreign government patronizes the president’s hotels and resorts.” 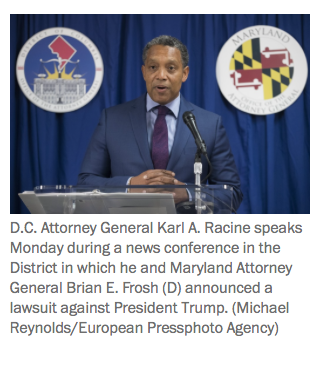 Trump has put his assets in a trust handled by his sons. But he has promoted and repeatedly visited his downtown D.C. hotel and his luxury resort in Florida, and his son Eric Trump has said the president will continue receiving regular updates about the financial health of his empire.

The lawsuit, the first of its kind brought by government entities, could open a new front for Trump as he navigates investigations by special counsel Robert S. Mueller III and congressional committees of possible collusion between his associates and the Russian government during the 2016 presidential campaign.

[Democrats plan resolution to demand Trump divest from his business]

Legal experts said that of several civil suits filed against Trump since he moved into the White House, the one brought by D.C. and Maryland stands the best chance of making it all the way to the Supreme Court.

If it does proceed, Racine and Frosh say they will demand through the discovery process copies of Trump’s personal tax returns to gauge the extent of his foreign business dealings. That fight would most likely end up before the Supreme Court, the two said, with Trump’s attorneys having to defend why the returns should remain private.

White House press secretary Sean Spicer dismissed the lawsuit as coming from Democrats. “The president’s interests . . . do not violate the emoluments clause,” he said. “It’s not hard to conclude that partisan politics may be one of the motivations.”

Frosh was able to launch the lawsuit without a green light from Maryland’s Republican governor, Larry Hogan, thanks to a resolution passed this year by the Democratic-majority legislature that gives the attorney general blanket authority to sue the federal government. Hogan’s office declined to comment on the lawsuit Monday, saying “the governor’s office no longer has a role in this process.”

The lawsuit, which The Washington Post first reported Sunday night, alleges “unprecedented constitutional violations” by Trump. The suit says Trump’s continued ownership of a global business empire has rendered the president “deeply enmeshed with a legion of foreign and domestic government actors” and has undermined the integrity of the U.S. political system.

“Fundamental to a President’s fidelity to [faithfully execute his oath of office] is the Constitution’s demand that the President . . . disentangle his private finances from those of domestic and foreign powers,” he lawsuit says. “Never before has a President acted with such disregard for this constitutional prescription.”

Frosh said in an interview that “this case is, at its core, about the right of Marylanders, residents of the District of Columbia and all Americans to have honest government.” To fully know the extent of Trump’s constitutional violations, he said, “we’ll need to see his financial records, his taxes that he has refused to release.”

Racine said he felt obligated to sue Trump in part because the Republican-controlled Congress has not taken the president’s apparent conflicts seriously.

“We’re getting in here to be the check and balance that it appears Congress is unwilling to be,” he said.

The constitutional question D.C. and Maryland will put before a federal judge is whether Trump’s business holdings amount to violations of parts of the Constitution known as the foreign and domestic emoluments clauses.

To guard against foreign countries gaining sway over the new republic’s ambassadors in the late 1700s, drafters of the Constitution prohibited any “Person holding any Office of Profit or Trust” from accepting “any present, Emolument, Office or Title, of any kind whatever, from any King, Prince, or foreign State.”

In another part of the Constitution, framers sought to prevent a president from favoring one state over another, forbidding the president from receiving any gift or emolument from a state and, instead, allowing only the compensation approved by Congress.

The lawsuit, filed in U.S. District Court for the District of Maryland, is the latest and most significant legal challenge to Trump over the issue of emoluments. The first was filed in January by Citizens for Responsibility and Ethics in Washington (CREW), a D.C.-based watchdog group. In March, a D.C. restaurant sued Trump, alleging the new Trump International Hotel in D.C. benefits from unfair advantages because of its close association with the president. And last week, a group of Democratic members of Congress said they plan to file suit soon. Each complaint, however, has faced legal hurdles over standing to sue the president.

In the Trump administration’s most detailed response yet, the Justice Department filed a 70-page legal brief Friday arguing the CREW lawsuit should be dismissed. The administration said Trump’s businesses are legally permitted to accept payments from foreign governments while he is in office. The filing held up the lack of past complaints — going all the way back to farm produce sold abroad by George Washington — to assert that market-rate payments for Trump’s real estate, hotel and golf companies do not constitute emoluments as defined by the Constitution.

Racine and Frosh, however, argue that violations by Trump are on scale never seen before and that D.C. and Maryland are being adversely affected by the Trump hotel near the White House.

After the Trump hotel hired staff and began holding events to cater to foreign diplomats, the Kuwaiti Embassy held an event at the hotel, switching its initial booking from the Four Seasons. Saudi Arabia, which Trump visited on his first trip abroad as president, has also booked rooms at the hotel through an intermediary on more than one occasion since Trump’s inauguration. Turkey held a state-sponsored event there last month. And in April, the ambassador of Georgia stayed at the hotel and tweeted his compliments. Trump has appeared at the hotel and greeted guests repeatedly since becoming president.

As a result, the hotel may be drawing business away from the taxpayer-owned Walter E. Washington Convention Center in the District and one in Maryland subsidized by taxpayers, Frosh and Racine argue.

Norman Eisen, who served as the chief White House ethics lawyer for President Barack Obama and is CREW’s board chairman, said jurisdictions such as the District and Maryland are among the “most perfect plaintiffs” to sue over emoluments because they have a say in making sure the Constitution is being enforced.

“In the emoluments clauses, we have these ancient air bags that were placed in the Constitution by the framers that are now being deployed,” said Eisen, whose nonprofit group has been advising the District and Maryland on their lawsuit. “Trump is the framers’ worst-case scenario; a president who would seize office and attempt to exploit his position for personal financial gain with every governmental entity imaginable, across the United States or around the world.”

On the domestic side, the suit alleges Trump has received unconstitutional financial favors from the U.S. government. It says the U.S. General Services Administration, which handles federal real estate, wrongly allowed Trump’s company to continue to lease the Old Post Office building, where Trump built his D.C. hotel, even though a clause in the contract said no elected official could remain on the lease.

The GSA initially said Trump would have to fully divest from the hotel after the election. But after Trump proposed increasing the GSA’s budget, the lawsuit says, the agency issued a letter saying Trump was in full compliance.

The lawsuit also alleges that Trump is violating domestic emoluments by creating a situation in which states feel compelled to compete for Trump’s favor, perhaps by offering zoning exemptions, waivers or other benefits to help his businesses.

After the Trump Organization initially said it would not pursue new deals while he was in office, Trump’s sons announced last week that the company would begin building a network of new hotels in mostly Republican-leaning states that he won in last year’s election.

The lawsuit by D.C. and Maryland says the two jurisdictions are faced with an “intolerable dilemma” — to go along with the Trump Organization getting special treatment, including possible lost local revenue, or “deny such requests and be placed at a disadvantage vis-à-vis states and other government entities that have granted or will agree to such concessions.”

The District and Maryland file the suit at great peril, Racine and Frosh allege, because the two have a disproportionately large percentage of federal workers and could be acutely affected by federal budget cuts that Trump could seek as retribution.

But Maryland argues that it has special standing to sue. As one of the original states that approved the Constitution, Maryland gave up a clause in its own state declaration that had required its governors not to take any gifts from foreign governments or other states.

“This case represents another storm, not just a dusting of snow but a blizzard of trouble for Trump,” Eisen said. “Who better than governmental actors to say our deal was — our fundamental democratic bargain was — we would get a president who would follow the Constitution.”

Racine and Frosh say that unless Trump is reined in under the emoluments clause, Americans can never be certain that, “underlying his travel ban, withdrawal from the Paris Accord climate deal or proposed tax cuts,” he is acting in the country’s best interest and not his own.

Strict adherence to the emoluments clauses, D.C. and Maryland argue, ensures “that Americans do not have to guess whether a President who orders their sons and daughters to die in foreign lands acts out of concern for his private business interests; they do not have to wonder if they lost their job due to trade negotiations in which the President has a personal stake; and they never have to question whether the President can sit across the bargaining table from foreign leaders and faithfully represent the world’s most powerful democracy, unencumbered by fear of harming his own companies.”

The suit seeks an injunction to force Trump to stop violating the Constitution but leaves it up to the court to decide how that should be accomplished.

Josh Hicks contributed to this report. Aaron Davis covers D.C. government and politics for The Post and wants to hear your story about how D.C. works — or how it doesn’t.