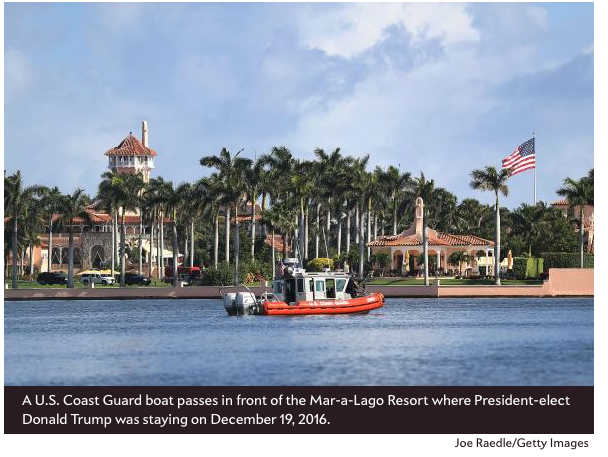 Update: The ShareAmerica blog post touting Mar-a-Lago has been taken down from the State Department-run website. “The intention of the article was to inform the public about where the President has been hosting world leaders,” a short statement on the original page now reads. “We regret any misperception and have removed the post.”

Original post, April 24, 2017, 3:17 p.m.: Donald Trump has done his best to rebrand his Mar-a-Lago club as the “Winter White House” in a not-so-subtle attempt to raise the stature of the private Palm Beach resort and possibly to offer an excuse for why he goes there so often. The president has spent seven of the 14 weekends he has been in office at the club, and he—and his staff—have made sure to use his preferred nomenclature whenever possible. But Trump’s rebranding effort has also gotten an unexpected and less-noticed push from elsewhere within the federal government: via the State Department’s foreign outreach program.

As spotted Monday by journalist Amy Westervelt, the Department-run news site ShareAmerica ran a story earlier this month that read an awful lot like a press release for the Trump-owned club. A snippet, which ran under the subhead “A dream deferred”:

Upon her death in 1973, [Marjorie Merriweather Post] willed the estate to the U.S. government, intending it to be used as a winter White House for the U.S. president to entertain visiting foreign dignitaries. Her plan didn’t work, however. Presidents Richard Nixon and Jimmy Carter never used the property. And in 1981 the government returned the estate to the Post Foundation because it was costing too much money to maintain.

That opened the way for Trump, a real-estate magnate, to purchase the property in 1985. When he acquired the house, Trump also bought the decorations and furnishings that Post had collected over the years, preserving Mar-a-Lago’s style and taste. … Post’s dream of a winter White House came true with Trump’s election in 2016. Trump regularly works out of the house he maintains at Mar-a-Lago and uses the club to host foreign dignitaries.

The post was also reblogged on the website of the U.S. embassy in the United Kingdom and shared on the Facebook page of the U.S. Embassy in Albania. The fact that government-funded websites are promoting the president’s for-profit venture drew an immediate complaint from Norm Eisen, a former White House ethics czar under Obama and a frequent critic of the current president, as well as Rep. Mark Takano, a California Democrat: 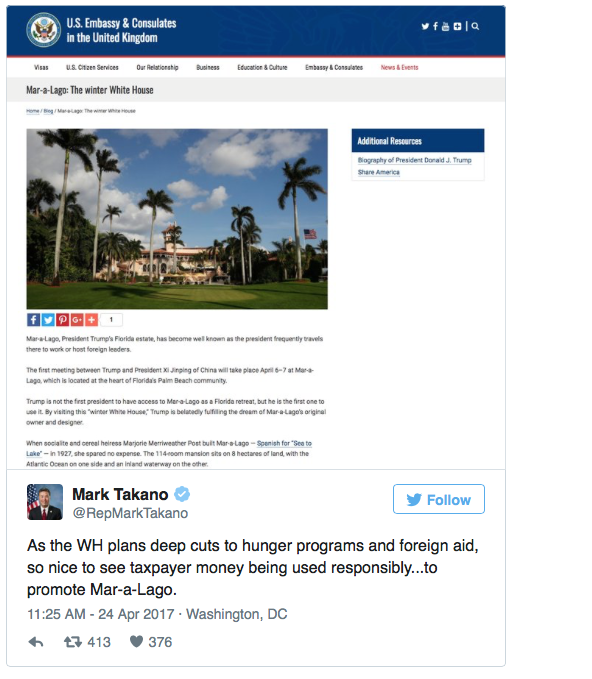 ShareAmerica is run by the State Department’s Bureau of International Information Programs, and describes itself as a “platform for sharing compelling stories and images that spark discussion and debate on important topics like democracy, freedom of expression, innovation, entrepreneurship, education, and the role of civil society.” Its current homepage features a mishmash of stories, ranging from one on the donation of one of the world’s largest private collections of insects to a U.S. university, to one on the global economic damage caused by counterfeit smartphones and pirated music. A request for comment from the bureau concerning the Mar-a-Lago story and the decision to publish it was not immediately returned.

It’s also not the first time that this administration has put out what amounts to a press release for a private entity with ties to a high-ranking official. Last month, the White House issued a release touting a new domestic investment by Exxon Mobil that borrowed heavily from the one put out by the oil company itself. Exxon was previously led by current secretary of state Rex Tillerson, who under an ethics agreement with the federal government has until May 2 to sell off his remaining shares in the company he used to run.

In the grand scheme of Trump-themed conflicts of interest, this appears to be a small one. The president, after all, continues to blur the line between his own personal interests and those of the United States—as do his eldest sons every time they travel the globe flanked by Secret Service details that double as government-sanctioned sales props for the family business. Nonetheless, the ShareAmerica post suggests that Trump’s ethics—or more specifically, lack thereof—are spreading out from the White House into other sectors of the government.

Know anything about a potential conflict of interest in the Trump administration? DM Josh Voorhees on Twitter, or email him at josh.voorhees@slate.com.