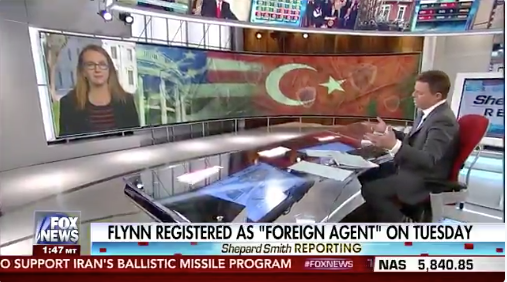 March 9th 2017.  Shepard Smith reports on ex-National Security Advisor Michael Flynn’s Turkish lobbying scandal, calling it “too much lying and too much Russia and too much smoke.” He interviews AP reporter Julie Bykowicz who helped break the story.  CLICK IMAGE ABOVE for link to video.

JULIE BYKOWICZ: Well, with regard to Mike Flynn the big news out of today was, and it was rather surprising to hear White House Press Secretary Sean Spicer said that the White House wasn’t aware during its vetting process of Mike Flynn that he had done work that could be construed as for the Turkish government. You would think that the White House would in the course of vetting someone for such an important job come across that information. But it appears that they did not. So that really made me remember when Flynn left his post when he was fired, it turns out, that Spicer was saying that there were other things than what he was offensively just fired for. We always sort of wondered what that was all about. We’re not getting a lot of answers out of the White House. But this whole episode with the Turkish government could be one more thing that the White House was concerned about when they let him go.