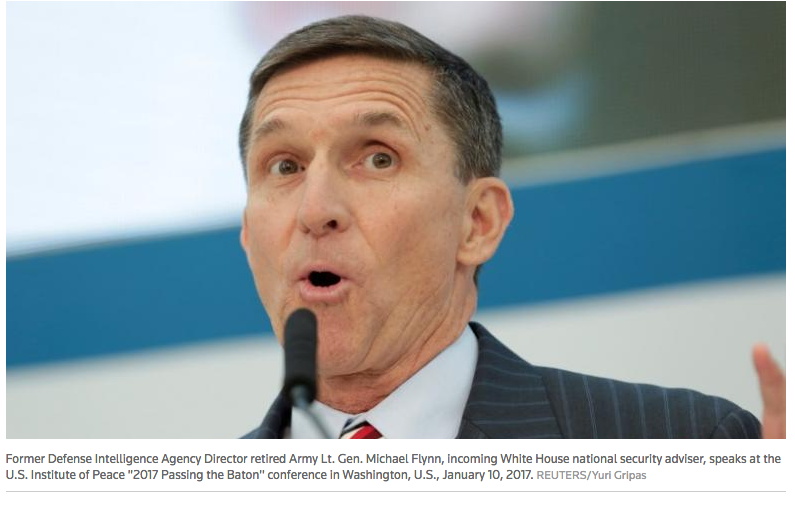 The conversations appear to raise further questions about contacts between Trump’s advisers and Russian officials at a time when U.S. intelligence agencies contend that Moscow waged a multifaceted campaign of hacking and other actions to boost Trump’s election chances over Democrat Hillary Clinton.

On Dec. 29, U.S. President Barack Obama ordered the expulsion of 35 Russian suspected spies and imposed sanctions on two Russian intelligence agencies over their involvement in hacking U.S. political groups in the 2016 election.

Whether Flynn and Russian ambassador Sergei Kislyak discussed those sanctions is unclear.

An 18th-century U.S. law, the Logan Act, bars unauthorized citizens from negotiating with foreign governments that are in disputes with the United States.

A Trump spokesman said on Friday that Flynn took a call from the Russian ambassador last month, and discussed setting up a call between the president-elect and Russian President Vladimir Putin after Trump’s inauguration on Jan. 20.

“The call centered around the logistics of setting up a call with the president of Russia and the president-elect after he was sworn in and they exchanged logistical information on how to initiate and schedule that call. That was it, plain and simple,” spokesman Sean Spicer told reporters.

Spicer said the call took place on Dec. 28. He said the call followed text message exchanges initiated by Flynn on Christmas Day, in which he wished the ambassador a merry Christmas and said he looked forward to “touching base with you and working with you.”

The two people familiar with the issue, who spoke on condition of anonymity, said several calls between Flynn and Kislyak took place on Dec. 29, the day of Obama’s announcement.

The transition team did not immediately respond to a request for comment on whether Flynn and the Russian ambassador spoke on Dec. 29.

Asked to comment, Alexey Mosin, a spokesman for the Russian Embassy in Washington, said, “the Embassy does not comment on multiple contacts, which are carried out on a daily basis with local interlocutors.”

After the Nov. 8 election, Russian Deputy Foreign Minister Sergei Ryabkov told the state-run Interfax news agency that the Russian government was in touch with members of Trump’s political team during the U.S. election campaign and knew most of his entourage.

In his news conference on Wednesday, Trump declined to answer whether anyone connected to him or the campaign had contact with Moscow during the presidential campaign and said he had no loans or business deals with or in Russia.