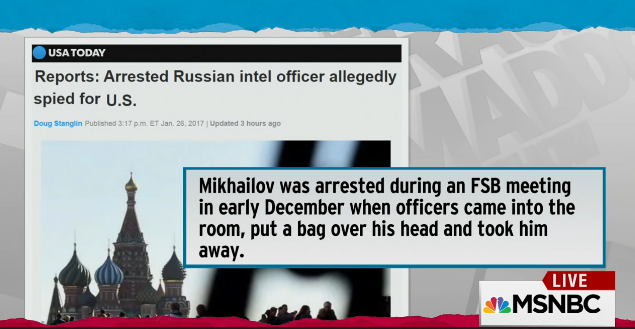 investigatingtrump.com editorial note: At a time when the massive amount of news emerging from the Trump White House, can seem overwhelming, Rachel Maddow reminds viewers to focus on what could be the biggest story since Watergate: Russia’s influence  on the 2016 election and what the signs inside the Kremlin might reveal about it. She begins by drilling down on the December arrest of a top official in the Russian FSB, successor to Vladimir Putin’s spy agency, the KGB. In her second segment she reports on a top tier purge of career diplomats at The State Department.

Rachel Maddow Show 1/26/17 Trump favor for unpopular Russia raises questions of influence Rachel Maddow relays reports of espionage and treason arrests in Russia and wonders why Russia has done for the U.S. to warrant favorable treatment from Donald Trump given Russia’s political unpopularity in the U.S. Duration: 17:10 CLICK IMAGE for a link to the full report.