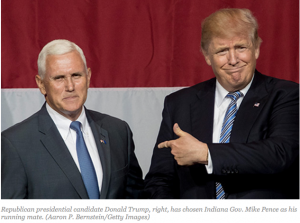 Indiana Gov. Mike Pence served five terms in Congress and worked his way up to a leadership role in the House. Since he has sealed his Congressional records until December 2022, we’ve done what we can to dig up the best reporting on Donald Trump’s would-be vice president.Pence describes himself as “a Christian, a conservative and a Republican, in that order.” He may be best known outside his state for his defense of Indiana’s religious freedom restoration law, which allowed businesses to deny service to gays and lesbians.
He started his political career as a Democrat who kept clippings of John F. Kennedy in his Indiana home as a boy. But in law school, his views shifted to the right. By 1988, at the age of 29, he ran as a Republican to try to unseat the Democratic incumbent in Indiana’s 2nd district and lost. He lost to the same candidate in 1990 after an ugly race that featured an ad with an actor dressed to look Arab thanking his opponent for foreign oil support. Pence’s campaign paid for his car payment and golf fees. (A year later, he wrote an essay called “Confessions of a Negative Campaigner” and repudiated his own style.)

Pence found his niche in talk radio in 1992 with “The Mike Pence Show,” which was syndicated across the state two years later. From 1995 to 1999, he hosted an Indianapolis political talk show on television. In 2000, he re-entered the political arena and finally won his seat to Congress (later redrawn as Indiana’s 6th district). An envelope with traces of anthrax welcomed Pence to the Capitol during the 2001 scare.

The Hoosier quickly became known in Congress as a small-government, small-budget purist, fighting against many of then-president George W. Bush’s initiatives. He derided the No Child Left Behind education reform as “more red tape.” He opposed Bush’s push to extend Medicare Part D and subsidize senior citizens’ prescription drugs. As the Great Recession began, he vehemently opposed the 2008 bailouts.

Pence waded into the immigration battle in 2006 with a proposed compromise that would focus first on border security and, once that was accomplished, incentivize undocumented immigrants to “self-deport” and reapply to be guest workers. The proposal quickly brought the scorn of the right. Pence’s proposal failed, and he ultimately opposed the 2007 deal that never passed.

Unlike his counterpart at the top of the ticket, Pence has repeatedly backed protections for the press, introducing and reintroducing a federal shield law that would protect reporters’ confidential sources, with exceptions including national security. “Without the free flow of information from sources to reporters, the public is ill-equipped to make informed decisions,” he said in 2011.

Clinton has been in the public eye for four decades — and there have been investigative stories about her for nearly as long. Read more.

Pence, who served as chair of the Republican Study Committee, tried to challenge John Boehner for minority leader in 2006 and lost, getting only 27 votes to Boehner’s 168. By 2008, Pence made his way to leadership, running unopposed to be Republican Conference Chairman.

He flirted with a bid for the 2012 GOP nomination and ultimately decided to run to be Indiana governor instead. He won the governor’s mansion in 2012. The governor took his tax-cutting chops from Congress to the state budget, signing the largest tax cut in Indiana history into law and axing the estate tax.

Pence is known for his strict views against abortion — which could help temper the worries of the GOP’s conservative base about the one-time “very pro-choice” Trump. While in Congress, he called Bush’s initiative that allowed limited stem cell research “morally wrong.” As governor, Pence signed one of the strictest anti-abortion measures in the nation in March 2016, which banned abortions based on fetal anomalies like Down syndrome. Even some Republican lawmakers in the state opposed the law. (Hoosier women responded by calling Pence’s office and giving detailed descriptions of their periods.) He also pushed a bill to cut off Title X grants to Planned Parenthood.

Indiana’s 2015 Religious Freedom Restoration Act expanded the definition of religious liberty to the point that critics said could allow discrimination against gays and lesbians. While Pence said at the time that the RFRA was “not about discrimination,” businesses came forward within a week announcing that they’d deny service to LGBT people.

The backlash was swift and harsh. The governors of Connecticut, New York and Washington — and mayors across the country — banned non-essential travel to the state for public employees. The NCAA hinted that it might pull out of future events just a week before the Final Four was set to begin in Indianapolis. The San Francisco-based computer firm Salesforce “canceled all programs” that required travel to Indiana, Angie’s List pulled out of a $40 million, 1,000 jobs expansion, and the top executives from Yelpand Apple wrote letters decrying the law and warning other states against following Indiana’s lead. The governor’s approval plummeted. Just weeks after signing the law, Pence signed an amended version of the law that was intended to provide protection for gays and lesbians.

After the Supreme Court ruled in favor of President Obama’s Affordable Care Act, Pence made comments at a House GOP meeting that compared the ruling to 9/11 (he apologized quickly).

For all his opposition to refugees settling in his own state, Pence hasn’t always been 100 percent on board the Trump Train. In December 2015, Pence tweeted, “Calls to ban Muslims from entering the U.S. are offensive and unconstitutional.” The governor first endorsed Ted Cruz in the GOP primary but threw his support to Trump after the Texas senator dropped out.

Pence was in the middle of a tough reelection fight when the call came from Trump. He dropped his gubernatorial bid to run on the national ticket.

See our similar roundup on Donald Trump and Hillary Clinton, and check out more of ProPublica’s coverage of politics in our ongoing series, The Breakdown.