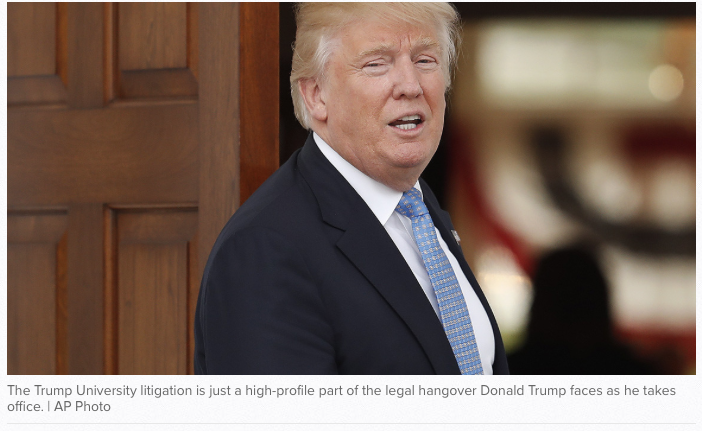 Days before President-elect Donald Trump is set to take the oath to uphold the Constitution, he has followed through on a more painful obligation: coughing up $25 million to settle litigation over his defunct Trump University real estate seminar program.

The $25 million will be put into escrow until a judge makes a decision on whether to approve the settlement. A hearing on the deal is set for March 31.

Last March, Trump vowed not to settle the long-running litigation — two federal class-action fraud lawsuits and a parallel state court action brought by New York Attorney General Eric Schneiderman. The suits accused Trump U. of deceiving students by falsely claiming that Trump knew the instructors and that the school was an accredited university.

Trump’s lawyer said any misstatements about Trump University amounted to “mere puffery.” Trump also repeatedly noted that many attendees were satisfied with the programs.

However, in November — after Trump’s upset victory over Hillary Clinton — the real estate mogul agreed to head off a looming civil trial by forking over enough money to pay back roughly half of the $1,500 to $35,000 that individual students paid for seminars or one-on-one mentorship programs.

A Trump attorney did not immediately respond to a call seeking comment Wednesday. When the proposed deal was announced two months ago, Trump took to Twitter to explain his rationale for seeking to close out the suits.

“I settled the Trump University lawsuit for a small fraction of the potential award because as President I have to focus on our country,” Trump, wrote then. “The ONLY bad thing about winning the Presidency is that I did not have the time to go through a long but winning trial on Trump U. Too bad!”

A spokeswoman for Schneiderman, Amy Spitalnick, said the payment of the funds is an important step in getting compensation to those who took part in the Trump U. program.

“The $25 million settlement marks a significant victory for the thousands of fraud victims in New York and across the country, all of whom will receive restitution, in addition to the up to $1 million in penalties Donald Trump will pay to the State of New York for violating education laws,” Spitalnick said. She noted that Schneiderman had obtained a written pledge from a Trump attorney that none of the funds for the settlement would come from any charitable foundation.

The Trump University litigation is just a high-profile part of the legal hangover Trump faces as he takes office. The scores of pending cases he or his companies face include claims of skimming tips at his New York SoHo hotel, demands for refunds of millions in membership fees charged by his country club in Jupiter, Florida, and allegations that his security personnel assaulted protesters outside Trump Tower.

Two weeks ago, Trump interrupted his transition-related duties for a 90-minute deposition at Trump Tower in one of a pair of lawsuits he filed against celebrity chefs who abandoned plans to build restaurants at his new luxury hotel in Washington. Those cases are grinding forward in D.C. Superior Court. It’s unclear whether Trump would have to testify in person at either case if they go to trial.

The president-elect’s litigation portfolio added one more case Tuesday: a defamation suit filed by a former contestant on his TV show “The Apprentice” who claims Trump falsely denied her account that he repeatedly kissed and groped her. A Trump spokeswoman dismissed the lawsuit, saying there is “no truth” to the story.