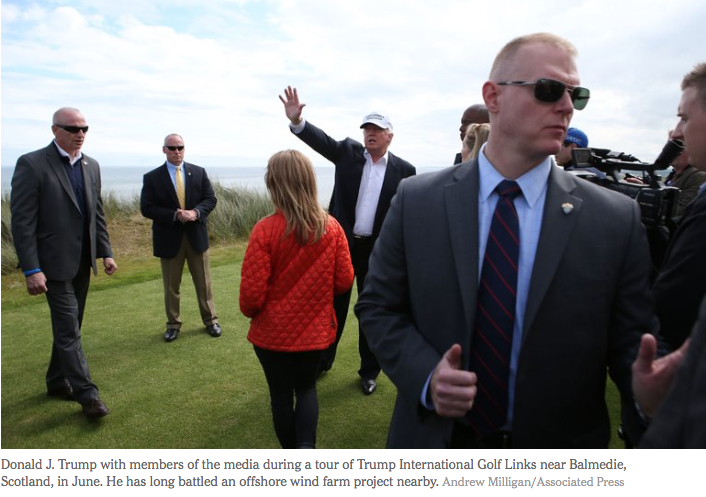 By Danny Hakim and Eric Lipton November 21st, 2016  LONDON — When President-elect Donald J. Trump met with the British politician Nigel Farage in recent days, he encouraged Mr. Farage and his entourage to oppose the kind of offshore wind farms that Mr. Trump believes will mar the pristine view from one of his two Scottish golf courses, according to one person present.

The meeting, held shortly after the presidential election, raises new questions about Mr. Trump’s willingness to use the power of the presidency to advance his business interests. Mr. Trump has long opposed a wind farm planned near his course in Aberdeenshire, and he previously fought unsuccessfully all the way to Britain’s highest court to block it.

The group that met with Mr. Trump in New York was led by Mr. Farage, the head of the U.K. Independence Party and a member of the European Parliament. Mr. Farage, who was a leading voice advocating Britain’s exit from the European Union, or Brexit, campaigned with Mr. Trump during the election. Arron Banks, an insurance executive who was a major financier of the Brexit campaign, was also in attendance.

“He did not say he hated wind farms as a concept; he just did not like them spoiling the views,” said Andy Wigmore, the media consultant who was present at the meeting and was photographed with Mr. Trump.

Mr. Wigmore headed communications for Leave.EU, one of the two groups that led the Brexit effort. He said in an email that he and Mr. Banks would be “campaigning against wind farms in England, Scotland and Wales.”

Mr. Wigmore said that Mr. Banks had previously opposed wind farms and that they had been studying the issue on their own. However, he said, Mr. Trump “did suggest that we should campaign on it” and “spurred us in and we will be going for it.”

His account of the meeting was previously reported in The Express, a British paper.

Hope Hicks, a spokeswoman for Mr. Trump’s transition office, at first disputed that Mr. Trump had raised the subject of wind farms with Mr. Farage, suggesting that participants in the conversation “denied this took place.” However, when pressed with the fact that one of the meeting’s attendees, Mr. Wigmore, had described the conversation in detail, she declined repeated requests to comment.

Amanda Miller, vice president for marketing at the Trump Organization, also declined through a spokeswoman to comment.

Mr. Farage’s office did not respond to requests for comment. Mr. Farage did sent out a Twitter post after the meeting, saying: “It was a great honour to spend time with @realDonaldTrump. He was relaxed and full of good ideas. I’m confident he will be a good president.” 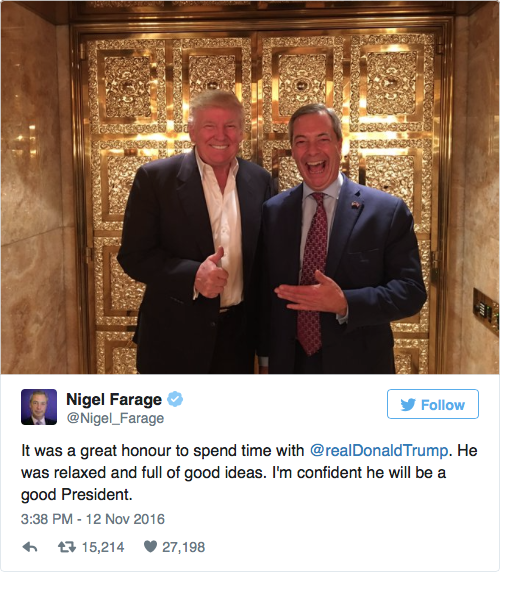 Mr. Trump and his family’s blending of business and political interests and appearances have received increasing scrutiny during the transition. Since the election, he has met with Indian business partners and his new Washington hotel has become a destination for diplomats. His daughter Ivanka, an executive in the Trump Organization, sat in on a meeting with Prime Minister Shinzo Abe of Japan, and her jewelry company promoted a $10,800 bracelet she wore during a postelection appearance with her father on “60 Minutes.”

Separately, one of Argentina’s most influential television programs reported on Sunday that during a congratulations call from President Mauricio Macri of Argentina after the election, Mr. Trump asked for Mr. Macri’s support for a project to build an office tower in Buenos Aires.

A spokesman for Mr. Macri denied the report on Monday, saying the two spoke only about official matters. 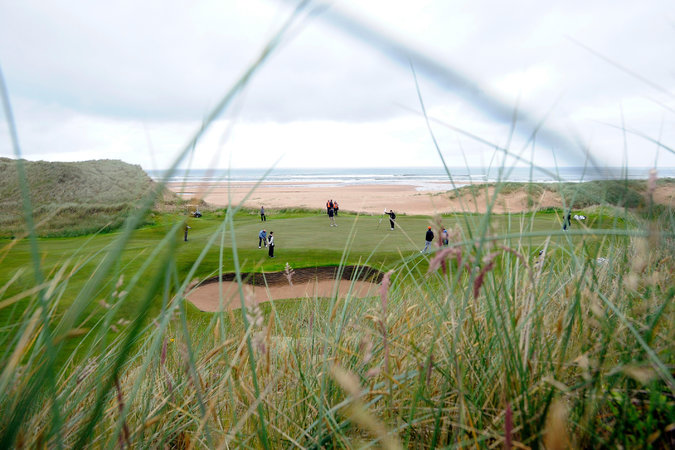 “That issue was not part of the conversation between President Mauricio Macri and President-elect Donald Trump,” said the spokesman, Ivan Pavlovsky. “The subject both leaders talked about was the institutional relationship, and they briefly mentioned the personal relationship they have had for years.”

The Japanese newspaper Asahi Shimbun, in an interview with Mr. Macri published on Monday, quoted him as saying that he had also spoken with Mr. Trump’s daughter Ivanka during the call. In the interview, Mr. Macri also described his longstanding relationship with the Trump family.

Trump representatives and a press representative from the Argentine Embassy both declined to comment on whether Ivanka Trump participated in the call with Mr. Macri.

Ethics experts in Washington said they were disturbed at the report of Mr. Trump’s apparent willingness to mix official duties as president-elect with his business concerns, saying actions like these threaten to compromise the integrity of the office of the president.

“I thought he was going to separate his business matters from the process of governing,” said Kenneth A. Gross, a partner at Skadden, Arps, Slate, Meagher & Flom, the international law firm, who advises corporations and elected officials on ethics laws.

“You don’t want to confuse the public good with the personal gain that can be accrued from leveraging the office of the president to pursue his business interest,” Mr. Gross said.

Norman Eisen — who served as the “ethics czar” in the Obama White House, appointed by the president to oversee rules related to conflicts of interest and lobbying — said that these kinds of allegations, even if they are just rumors, demonstrate why Mr. Trump must completely separate himself from involvement in his business enterprises.

Mr. Eisen said that it was “an extraordinary transgression of the core idea of public service” for Mr. Trump to speak with prominent Britons and a member of the European Parliament about his frustration with wind farms that harm views — at the same time as he has been involved in a fight over this exact issue.

Mr. Trump’s actions are undermining public confidence in the office of the president, he said, adding, “I am profoundly troubled by it.”

In Scotland, Mr. Trump has a golf course on the west coast, Trump Turnberry, which he bought in 2014 and which has hosted four British Opens, and one on the east coast, Trump International Golf Links, that he built near Balmedie, a village in Aberdeenshire. Both resorts have struggled financially.

The Aberdeenshire course has been controversial since the Scottish government approved its development in 2008, turning aside environmental concerns about the destruction of coastal sand dunes. A local pressure group called Tripping Up Trump is among the opponents of the resort.

Mr. Trump’s fight against an offshore wind farm, consisting of 11 turbines, off the Aberdeenshire coast ended last December when Britain’s highest court unanimously rejected his attempt to block it. Mr. Trump had vowed to halt development on the golf course project if the wind farm went forward.

The skirmishing between Scottish officials and the Trump Organization became bitter. After the ruling, Alex Salmond, Scotland’s former first minister, called Trump a “three-time loser” — referring to his losses in various levels of the court system — while Mr. Trump called Mr. Salmond “a has-been and totally irrelevant,” according to the BBC.

Scotland, one of four regions of the United Kingdom, is led by Nicola Sturgeon, the current first minister. “Scotland has vast potential to generate the power we need from renewable sources, in a way that helps the global fight against climate change,” her office said in a statement, adding: “We have clear planning policies in place to ensure wind farms are developed in appropriate locations.”