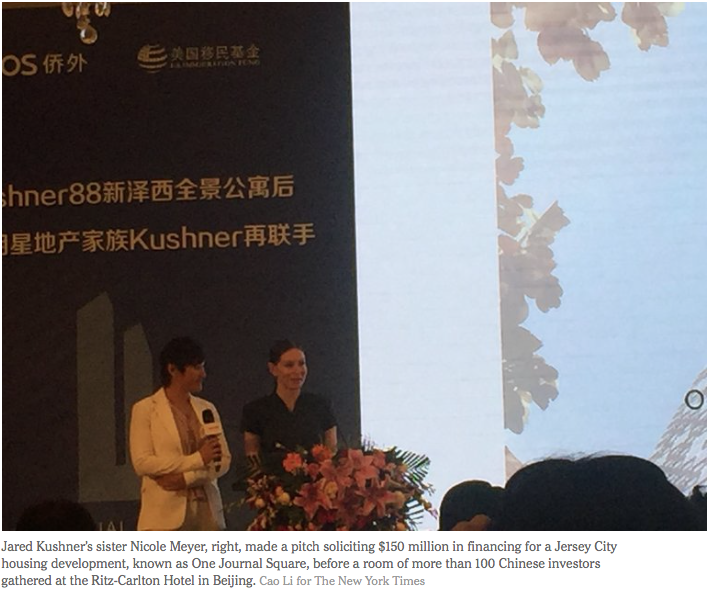 Editors note: both stories on Nicole Meyer’s pitch to Chinese investors were published Sunday by The New York Tines. The AP story, the most recent of the two, appears first:

BEIJING — The sister of President Donald Trump’s son-in-law Jared Kushner has been in China courting individual investors with a much-criticized federal visa program that provides a path toward obtaining U.S. green cards.

Kushner’s sister Nicole Meyer promoted One Journal Square, a Kushner Companies’ development in Jersey City, at an event Sunday at the Four Seasons Hotel in Shanghai, according to participants.

The pitch seeks to raise funds from Chinese investors through the U.S. government’s EB-5 visa program, which allows permanent U.S. residency for those who finance projects that create a certain amount of jobs.

The event was organized by Beijing-based immigration services company QWOS and Kushner Companies, according to an advertisement on the Chinese company’s website, which says the project is seeking $150 million from 300 EB-5 investors.

Kushner, a senior adviser to Trump, stepped down as chief executive of the Kushner Companies in January and has sold stakes in several properties to help allay concerns about conflict of interest. His family’s promotional efforts in China come amid widespread criticism of the EB-5 visa program, which has grown popular among wealthy foreigners seeking to move to the U.S. but faces allegations of fraud and misuse.

Critics say many of the investments purportedly aimed at assisting poor areas of the U.S. have instead wound up going to projects in more affluent neighborhoods, while many programs have been badly hit by fraud scandals. U.S. lawmakers have been weighing proposed changes to the program, which would likely affect companies such as Kushner Cos. should it want to raise funds from such investors. Earlier this month, Congress extended the EB-5 program in its current form through Sept. 30.

Staffers at QWOS’ offices in Beijing and Shanghai either refused to comment or did not answer repeated calls. The Kushner Companies declined comment.

Blake Roberts, an attorney at the law firm of WilmerHale, which is Kushner’s personal counsel, said Kushner has no involvement in the operation of Kushner Companies.

Roberts said in a statement that Kushner has divested his interests in the One Journal Square project by selling them to a family trust of which he, his wife and his children are not beneficiaries, a mechanism suggested by the Office of Government Ethics.

“As previously stated, he will recuse from particular matters concerning the EB-5 visa program,” the statement said.

Now led by Kushner’s relatives, the Kushner Companies had earlier been negotiating with China’s Anbang Insurance Group to provide what could be hundreds of millions of dollars in equity for redevelopment of a Manhattan office building. Those negotiations, which had drawn criticism from lawmakers and government ethics experts, ended in March. Critics saw it as a potential attempt by China to curry favor with the White House.

BEIJING — Jared Kushner has said that he has stepped away from the day-to-day business of his family’s real estate company while he serves as a senior adviser to his father-in-law, President Trump. CLICK IMAGE below for link to the NYT story. 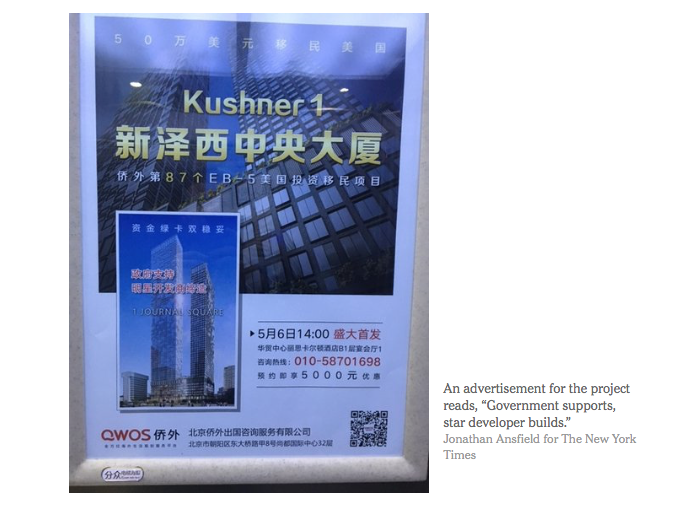 But Mr. Kushner’s relatives are working feverishly to solicit overseas money for projects in the United States, and they are highlighting their ties to Mr. Kushner as they court investors.

On Saturday afternoon, Mr. Kushner’s sister Nicole Meyer made a pitch to attract $150 million in financing for a Jersey City housing development, known as One Journal Square, to more than 100 Chinese investors gathered at the Ritz-Carlton Hotel in Beijing.

The money would be provided through a much-criticized government program known as EB-5 that awards foreign investors a path to citizenship in exchange for investments of at least $500,000 in American development projects.

Speaking in a ballroom, Ms. Meyer said the project “means a lot to me and my entire family.” She mentioned her brother’s service as chief executive of Kushner Companies, the family business from which he resigned in January, saying he had left to serve in the Trump administration.

The project was advertised to Chinese investors as the latest offering from the “star Kushner real estate family.” The project, which includes two towers, 1,476 luxury apartments and even a medical center for pets, was promoted as “Kushner 1.” Construction is scheduled to begin in early 2018.

Risa Heller, a spokeswoman for Kushner Companies, declined to comment.

Mr. Kushner, who is married to Mr. Trump’s daughter Ivanka, has become a central voice on China, serving as a conduit between Beijing and Washington.

As a businessman, he courted Chinese firms, most notably Anbang Insurance Group, the financial firm linked to members of the country’s ruling Communist Party. In March, Kushner Companies said it had ended talks with Anbang for an investment in its headquarters at 666 Fifth Avenue in Manhattan. The potential deal raised eyebrows because of its favorable terms for the Kushners, who are seeking help with the troubled property.

Even as Mr. Kushner seeks to keep a distance from the family business in his new role, his persistent ties to the company have come under scrutiny.

He remains the beneficiary of a series of trusts that own his stakes in Kushner Companies properties and other investments, worth as much as $600 million, and probably more. Since his move into politics, he has divested his stakes in dozens of other entities used to hold the investments, although he has held on to the vast majority.

Mr. Kushner’s government ethics disclosure form shows he was a manager or president at six entities associated with the Jersey City project until January. He divested his stake in one of them, K One Journal Square LLC, in January. It is unclear what happened with the other entities.

“Mr. Kushner divested his interests in the One Journal Square project by selling them to a family trust that he is not a beneficiary of, a mechanism suggested by the Office of Government Ethics,” said Blake Roberts, an attorney at WilmerHale advising Mr. Kushner on ethics issues. “As previously stated, he will recuse from particular matters concerning the EB-5 visa program.”

His relatives’ embrace of the EB-5 program may also pose complications for Mr. Kushner. The program has been labeled “U.S. citizenship for sale,” and it has come under scrutiny after a series of fraud and abuse scandals. Watchdogs have noted the program’s lax safeguards against illicit sources of money. 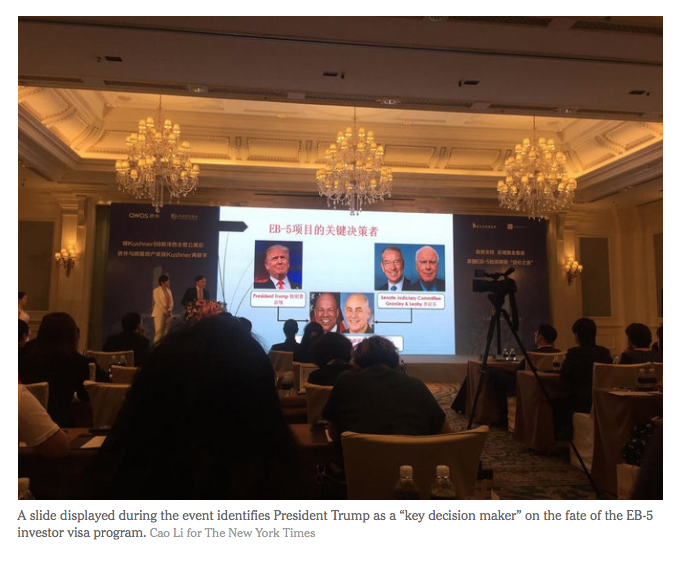 Government ethics experts have criticized Mr. Kushner for retaining an interest in the business, given his broad White House portfolio, which could affect his financial position. The company has declined to make public a complete list of its partners and lenders.

Noah Bookbinder, executive director of Citizens for Responsibility and Ethics in Washington, a liberal nonprofit group, said the sales pitch by Kushner Companies in China was “highly problematic” and could be interpreted as selling access to Mr. Kushner. He called on Mr. Kushner to recuse himself from any decisions related to the EB-5 program.

Lawmakers are considering major changes to the program, through which investors, mostly from mainland China, receive about 10,000 visas each year. Some critics have urged the government to abolish it entirely. A slide displayed at the event on Saturday identified Mr. Trump as a “key decision maker” on the fate of the EB-5 program.

The program provides a cheap source of financing to developers, since investors are generally not looking for high returns, only a green card. Mr. Kushner raised about $50 million from Chinese investors for a different project in Jersey City, a Trump-branded luxury apartment tower that opened in November.

Kushner Companies has declined to identify the investors it found through the program.

On Saturday, Ms. Meyer talked about how family values had shaped Kushner Companies. She spoke of her grandparents, who survived the Holocaust, and about her father, Charles Kushner, who founded the company in 1985. He later spent time in prison for illegal campaign donations, tax evasion and witness tampering.

“As children we would spend our Sundays visiting properties with my father and staying up late through the night, by his side, when closing an acquisition,” Ms. Meyer said. “Our father taught us about respect for our partners, hard work, dedication and most importantly, perseverance.”

As Ms. Meyer spoke, journalists for The New York Times and The Washington Post were removed from the ballroom and told by organizers it was a “private event,” even though it had been publicly advertised. It was hosted by Qiaowai, a Chinese immigration agency that helps Chinese families move abroad. Ms. Meyer is scheduled to appear in other Chinese cities in the coming days.

Ms. Meyer was asked after the event whether she was concerned about possible conflicts of interest facing her brother, but she did not respond. A man accompanying her, growing angry, shouted, “Please leave us alone!”