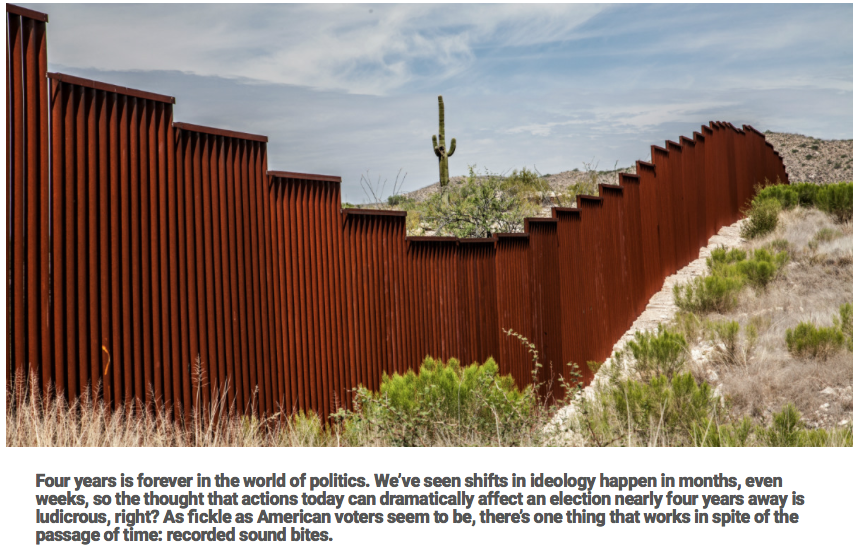 Donald Trump has a problem with his wall. Reports started popping up yesterday that his promise to have Mexico pay for the wall may be broken with some of his first actions. Congress is likely going to have to fund the building of the Mexican border wall with taxpayer dollars. Some of us have assumed this would be the case since his first ludicrous proclamation that Mexico would be paying for it, but it’s just starting to hit home now.

Since he’s always known that it would be nearly impossible to make a sovereign nation pay for something they don’t want, he started mitigating the potential damage back in October by saying that Mexico would reimburse us for the price of the wall. The spin is already starting. First, they were supposed to pay for it. Now, they’re supposed to pay us back for building it. Starting around noon today and with every future financial interaction with Mexico, we’ll hear that these are example of how he’s making them pay for it. We’ll probably hear about how Ford pulling out of its Mexican plant is the first batch of dollars that will be used for the wall. In fact, every job we “get back” from Mexico will be used as an example of wall-repayment.

Here’s the problem. None of these claims will change the fact that American taxpayers will have their dollars put into building it. Keep in mind that I’m not against this; we’ve needed stronger border security for decades and if there’s an opportunity to finally build a wall without adding to the budget, I’m all for it. The problem is twofold: they won’t be cutting other portions of the budget to make up for the added expense and he used this line to mislead the people.

Some will argue that he was just new to politics, that he wasn’t aware that Mexico wouldn’t be paying for it. Others will say it was hyperbole on the campaign trail. Therefore, the only possible excuses are that he’s an idiot or a liar. Either trait would have prevented him from being President if he didn’t run against the only candidate who lies even more than he does.

What does this mean for 2020? It could be huge. If he’s not able to tangibly get Mexico to pay for the wall, he’s going to get hammered by the Democrats. As they learned this year, showing poor character or having as his only qualification the fact that he was born rich weren’t enough to sway the people. However, Americans still do not look kindly on failed promises, particularly when they’re the primary talking point used by a candidate. Every President fails in many or even most of their promises, but they have to keep the big ones. Had Barack Obama failed to get Obamacare passed, he would have lost in 2012. If George W. Bush had failed to protect Americans after 9/11, he would have lost in 2004. If Bill Clinton had not kept his promise to engage an economic plan that would “compete and prosper in the world economy,” he would have probably still beaten Bob Dole in 1996, but not as badly (granted, his economy benefited from the rise of the internet, but the economy still thrived on his watch).

George H. W. Bush also had a big campaign promise: no new taxes. Backed into a corner, he ended up raising taxes in his first term. This hurt him dramatically because of an extremely well played sound bite that hit television and radio constantly in 1992. “Read my lips. No new taxes.” This was an isolated sound bite that tanked his chances.

“We’re going to build a wall and Mexico’s going to pay for it.” This phrase was uttered probably north of 100 times by Trump during the campaign. If he doesn’t deliver and American taxpayers are stuck with $10-$70 billion to build and yearly maintenance fees in the billions as well, the Democrats are going to paint Trump as either an idiot or a liar. It may stick. There’s no shortage of sound bites and the message can resonate if he doesn’t have a successful first term.

I’m all for a wall. I just wish he would have been up front about it to Americans instead of giving millions of people the false hope that he was going to force a sovereign nation to pay to defend our borders from their citizens. This may come back to haunt him and the Republican Party in 2020.

JD Rucker: WILL “MEXICO’S GONNA PAY FOR IT” BECOME TRUMP’S “READ MY LIPS, NO NEW TAXES”? added by Peter Lance on January 17, 2017
View all posts by Peter Lance →