The Guardian: Trump’s other Wall – Is his Irish golf resort a sign he believes in climate change? 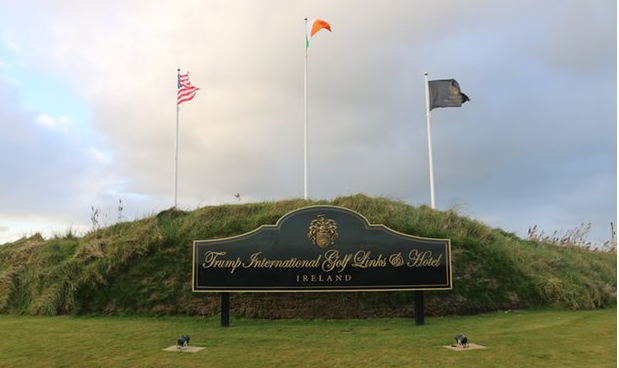 By Caelainn Hogan November 17th, 2016. On election night in Tubridy’s bar, one of few buildings in the village of Doonbeg, Ireland, that was still open at midnight, pints of Guinness were being poured with “Trump” written on top in creamy froth. A few local men huddled around the bar discussing their man’s chances.

“If he wins, we’ll get that wall built, sure enough!” one of them cheered.

The wall, however, wasn’t the one you would first think of.

Long before he set his sights on Mexico, Donald Trump had his eyes on a different wall. He wanted to build one on the Irish coast of County Clare – a 13ft high structure erected to protect his luxury golf resort, the Trump International Golf Links and Hotel, from increasingly volatile storms and rising sea levels.

While the president-elect announced a climate-change skeptic as the leader of the Environmental Protection Agency transition team, this move to protect his investment suggests Trump recognizes the effects of a changing climate.

Propped at the bar, Martin Kelly, a 46-year-old local contractor from Doonbeg, boasted of how he helped lay the foundations of the first golf resort in the village. He hopes to be a leading contender for the contract to work on the wall Trump is determined to build. His mother works at the golf resort, and Kelly says the company has been good to its employees and local contractors.

“I’m delighted to see him get in,” Kelly said the next morning as he drove along the wide, curving expanse of Doughmore beach in front of the course. “He spends money and is minding jobs. He gets the local man like me.”

This summer, the Irish Times reported that planning authorities at An Bord Pleanála rejected an application to designate the wall a “strategic infrastructure development”, further delaying the construction of the planned 200,000-ton structure that would span 2.8km (1.74 miles) of the dunes. But Trump’s Irish firm, TIGL Ireland Enterprises, is relodging an application with the local county council and warned that without the wall, the “viability of the entire resort and its potential closure” would be in question.

His son, Eric Trump, visited the course this summer, a property he says his family loves and invested upwards of $50m to $60m in. He recalled first seeing the course in 2014 when “20 or 30 metres of dunes” had already been eroded. A few more heavy storms, and he worried their redesigned, luxury course might be lost completely.

‘It’s there to be seen, sure and certain’

Kelly was one of the first to join the club but had to give up his membership, unable to afford the high fees, which cost thousands of dollars a year. Today, he is more concerned about the jobs the resort provides and the land he grew up on.

“I tell you, it’s not about the golf course, it’s about all this lower area,” he said, pointing towards the land stretching behind the course, where families he knows have farms and land.

“The wall is an issue at the minute, but if [the dunes] go, the water’s coming straight over it, that’s the big issue,” he warned. “Long term, they’re going to get washed away, and if the water gets in, there’s no way to get it out.”

He has seen the storms increasing over the years and the way the coastline has been eaten away. He is no skeptic when it comes to climate change and rising sea levels.

“They be rising a bit, with the global warming, the Antarctic and all that, the melting away of the ice,” he said. “It’s there to be seen, sure and certain.”

With the fight for planning permission continuing, Kelly thinks construction of the wall might be delayed another two years but hopes sections can be built to protect the worst-hit areas.

“There’ll be a lot of damage before then,” he said. “The whole beach does need to be done.”

There have been other measures taken to try to protect the course, none of which have worked. In 2001, owners of the original golf course tried to implement sand trap fencing, a “soft” erosion protection measure, but it was washed away by a storm within weeks. A 2014 report warned that erosion was a natural part of the dunes’ dynamic system and that “construction of physical barriers” could lead to “beach starvation and increased rates of erosion”.

Even if built, the wall in Doonbeg may be unable to hold back the sea in a few years. Robert Devoy, a researcher with the Centre for Marine and Renewable Energy Ireland (MaREI), says according to models, the waters on the west coast could rise 45-55cm in the coming decades, though realistically he thinks the waters will rise by a metre.

“Who knows what areas around Doonbeg would be flooded,” Devoy said.

‘A playground for multimillionaires’

Trump tried to build the wall once before but failed. On a marshy patch of land beside the hotel, boulder-sized chunks of rock lay strewn about, left over from the first attempt to build the wall in 2014, after storms almost washed away the 18th hole and damaged other sections of the course.

The local county council halted the construction and Trump’s wall was thwarted by the tiny, narrow-mouthed whorl snail, which lives in the dunes. The snail, around since the ice age but now endangered, is protected in Ireland, and binding conditions in the original planning permission demand regular monitoring to ensure activities on the golf course do not endanger it. The snail has become a mascot for those opposing the wall, with organizations such as Friends of the Irish Environment, Save the Waves and local surfer associations backing a #NatureTrumpsWalls campaign. More than 100,000 people have signed an online petition to “Stop Trump’s Irish Wall”.

For the wall to go forward, Clare County council will have to grant new planning permission, and the application that Trump’s firm is submitting could take months to process.

The Trump International Golf Links and
Hotel. Photograph: Caelainn Hogan
Years before the resort was first built, 55-year-old Alan Coyne remembers surfing the swells that roll into Doughmore beach, using the highest sand dunes – the only major landmarks – to navigate. He has followed their shifting over the years, living for three decades in the nearby town of Lahinch.

Now a pristine environment is threatened, in his eyes, by a wall meant only to protect “a playground for multimillionaires”, as he describes Trump’s resort.

“There’s a generation of kids learning to surf,” Coyne said, tussling the hair of his 11-year-old son. “It doesn’t matter what age you are, what your beliefs are, if you want to go out and catch a wave, you can.”

Lahinch thrives off its surf schools and nearby swells, fueled by the very storms increasingly rolling across the Atlantic.

“By doing what [Trump] wants to do, it’s going to kill off a beautiful place,” he said. “I was never so embarrassed at how the Irish government welcomed him into our country.”

When Trump landed at the Shannon airport after purchasing the course in May 2014, finance minister Michael Noonan was part of a welcoming party that laid out a red carpet in front of his private jet.

The night after the election in Tubridy’s bar, Fox News playing on a large screen, a handful of local men, most wearing jackets or hats printed with the Trump Doonbeg logo, were celebrating his election. But not everyone was as enthused.

One local man, who lives beside the golf course, leaned in close and whispered that he could never support Trump. For one, he said, he has nine sisters. But he also worried if the wall is built, the sea will be forced around and flood his own land.

Behind the counter of a local shop, Christina Buckley planted a red baseball cap on her head. She said she pretends it’s a “Make America Great Again” cap, but it reads “Whelan’s Foodstore and Deli”.

“I met him face to face on the dunes,” she said of Trump. She recalled him asking whether she and her two friends were “good neighbors or bad neighbors” due to some local tensions over his resort. Her friend warned Trump he “was on Irish soil”.

Buckley said she believed Trump would succeed in building the wall, and that people in her village would support it, with more jobs promised if the project gets the green light. But she worried the wall could also affect those living nearby.

“My home place, we border that [wall]. It’s going to drown us, it’s going to drown people on the other side. When the tide comes, it has to go somewhere,” she said. “That’s only one place to protect – why not protect the people who have been there all their lives?”

The Guardian: Trump’s other Wall – Is his Irish golf resort a sign he believes in climate change? added by Peter Lance on December 17, 2016
View all posts by Peter Lance →