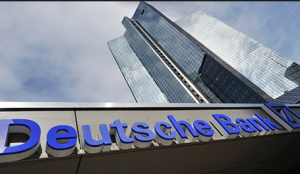 The U.S. Justice Department proposed that Deutsche Bank AG pay $14 billion to settle a set of high-profile mortgage-securities probes stemming from the financial crisis, according to people familiar with the matter, a number that would rank among the largest of what other banks have paid to resolve similar claims and is well above what investors have been expecting.

The figure is described by people close to the negotiations between Deutsche Bank and the government as preliminary, and they said it came up in discussions between the bank and government lawyers in recent days. It hasn’t been previously disclosed. Deutsche Bank is expected to push back strongly against it, the people said, and it is far from clear what the final outcome will be.

It is also unclear how much of that amount is proposed to be paid in cash, and how much could be in consumer relief, as past deals have been structured.

The Justice Department routinely opens high-stakes civil settlement talks with a tough posture, posing higher numbers than it might expect eventually to win, even from banks eager to close long-running probes, lawyers involved in current and similar negotiations say.

After the publication of this story by The Wall Street Journal, Deutsche Bank confirmed in a statement that the Justice Department’s opening bid is $14 billion and that the bank has been invited to submit a counterproposal.

“Deutsche Bank has no intent to settle these potential civil claims anywhere near the number cited,” the bank said. “The negotiations are only just beginning. The bank expects that they will lead to an outcome similar to those of peer banks which have settled at materially lower amounts.”

Deutsche Bank hasn’t said what it has set aside in anticipation of a settlement. The bank held €5.5 billion ($6.2 billion) in total litigation reserves as of June 30, and said it expected to set aside more before the end of the year.

Privately, Deutsche Bank lawyers have suggested that the bank views between $2 billion and $3 billion as a reasonable cost to close out the Justice Department’s mortgage-related probe quickly, according to people familiar with internal bank discussions and signals communicated to investors. One factor in Deutsche Bank executives’ thinking is that the lender already paid $1.9 billion in 2013 to settle some U.S. claims tied to mortgage-backed securities, some of the people said.