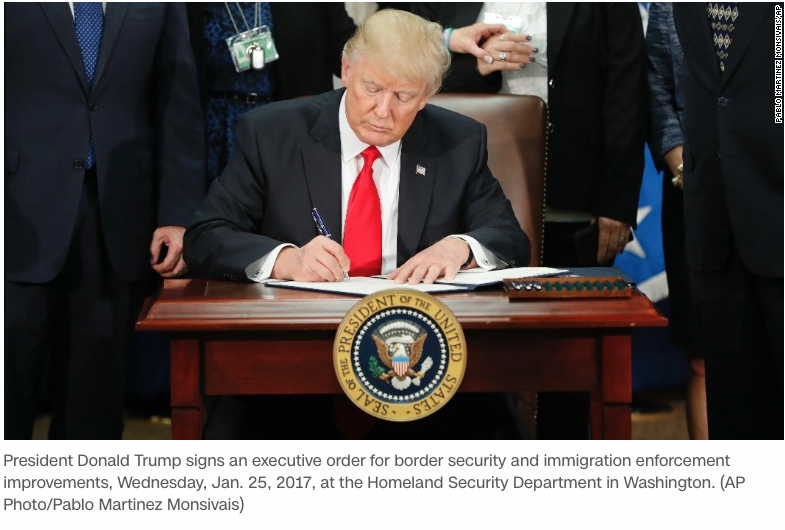 The White House spokesman on Monday said career US diplomats who don’t back President Donald Trump’s anti-immigration executive order should find a new line of work if they don’t get on board.

Asked about a draft memo (published by The Washington Post) signed by dozens of State Department diplomats opposing the temporary ban on refugees and citizens of seven Muslim-majority nations from entering the US, spokesman Sean Spicer encouraged the federal employees to “either get with the program or they can go.”

“The president has a very clear vision. He’s been clear on it since the campaign. He’s been clear on it since taking office, that he’s going to put this safety of this country first. He is going to implement things that are in the best interest of the safety of this country prospectively, not re-actively,” Spicer said at the White House. “And if somebody has a problem with that agenda then that does call into question whether or not they should continue in that post or not.”

A draft of the memo, which has been circulating among the foreign service for days and may be sent through the State Department’s well-established “Dissent Channel,” was obtained by CNN. Existence of the memo was first reported by ABC news.

It warns that not only will the new immigration policy not keep America safe, but it will harm efforts to prevent terrorist attacks. The ban “will not achieve its stated aim of to protect the American people from terrorist attacks by foreign nationals admitted to the United States,” the draft memo notes.

The internal memo is expected to be delivered through the “dissent channel,” a mechanism for State Department officials to offer alternative views on foreign policy without fear of retaliation. It was established in the 1960’s during the Vietnam War to ensure that senior leadership in the department would have access to alternative policy views on the war. Last year, more than 50 diplomats sent a dissent cable opposing US inaction in Syria.

“Given the near-absence of terror attacks committed in recent years by Syrian, Iraqi, Irani, Libyan, Somalia, Sudanese, and Yemeni citizens who are in the US after entering on a visa, this ban will have little practical effect in improving public safety,” the current memo says.

Acting State Department spokesman Mark Toner said Monday, “We are aware of a dissent channel message regarding the Executive Order titled “Protecting the Nation from Foreign Terrorist Entry into the United States.”

“The Dissent Channel is a longstanding official vehicle for State Department employees to convey alternative views and perspectives on policy issues,” he added. “This is an important process that the Acting Secretary, and the Department as a whole, value and respect. It allows State employees to express divergent policy views candidly and privately to senior leadership.”

The memo says the executive order “stands in opposition to the core American and constitutional values that we, as federal employees, took an oath to uphold.”

The move “will immediately sour relations” with countries whose governments are “important allies and partners in the fight against terrorism, regionally and globally.”

“By alienating them, we lose access to the intelligence and resources (needed) to fight the root causes of terror abroad” before attacks occur in the US, the draft memo reads.

It goes on to warn the move will increase anti-American sentiment.

“Almost one-third of these countries’ combined populations are children under the age of 15; there is no question that their perception of the United States will be heavily colored by this ban,” the memo says. “We are directly (impacting) the attitudes of current and future leaders in these societies — including those for whom this may be a tipping point towards radicalization.”

The memo also details the humanitarian impact and potential damage to the US economy from the loss of revenue from foreign travelers and students. “The end result of this ban will not be a drop in terror attacks in the United States; rather, it will be a drop in international good will towards Americans and a threat towards our economy,” it says.

The career diplomats write that the ban “calls back to some of the worst times in our history,” such as the internment of Japanese-Americans during World War II.

“Decades from now we will look back and realize we made the same mistakes,” the draft memo warned.

CNN: WH tells career diplomats who oppose Trump to get out. Spicer, who misunderstands State’s “Dissent Channel,” says they can “either get with the program or they can go” added by Peter Lance on January 30, 2017
View all posts by Peter Lance →