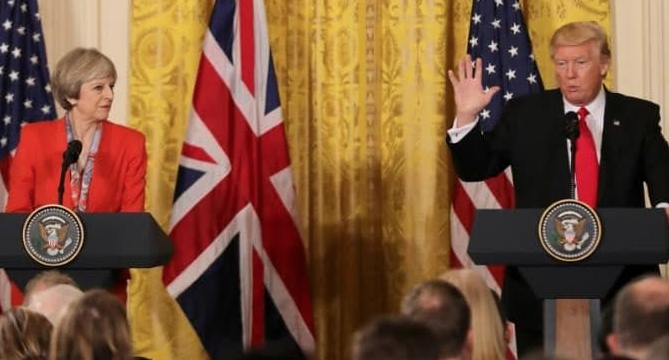 WASHINGTON (AP) — President Donald Trump said Friday that his defense secretary’s opposition to torture would override his own belief that enhanced interrogation “does work,” quietly giving ground after growing public concern about a return to Bush-era use of waterboarding and other especially harsh procedures.

Trump made his comments at a news conference during which he held firm on another controversy — trade and illegal immigration from Mexico. He said he said had a “very good call” with Mexican President Enrique Pena Nieto earlier in the day but reaffirmed his belief that Mexico has “outnegotiated and beat us to a pulp” on trade — and that would change.

“We’re no longer going to be the country that doesn’t know what it’s doing,” Trump declared.

Two issues — torture and the U.S.-Mexico relationship — dominated the new president’s brief news conference alongside British Prime Minister Theresa May after their meeting at the White House. That was Trump’s first meeting with a foreign leader after becoming president last Friday.

Since taking office, Trump has signaled a renewed embrace of torture in the fight against Islamic extremism. But he said he would defer to the views of his defense secretary, James Mattis, who has questioned the effectiveness of such practices as waterboarding, which simulates drowning.

“He has stated publicly that he does not necessarily believe in torture or waterboarding, or however you want to define it. … I don’t necessarily agree. But I would tell you that he will override because I’m giving him that power. He’s an expert. He called Mattis a “general’s general” whom he would rely upon.

Later in the day, the president traveled to the Pentagon, where he was sign a trio of executive actions, including one to halve the flow of refugees into the United Sates and stop all entries from some majority-Muslim nations. He also was to meet with the Joint Chiefs of Staff and attend a ceremonial swearing-in for Mattis.

The focus on torture has been renewed since The Associated Press and other news organizations obtained a copy of a draft executive order that signals sweeping changes to U.S. interrogation and detention policy.

The draft order, which the White House said was not official, also would reverse President Barack Obama’s effort to close the military detention center at Guantanamo Bay, Cuba — a place Trump has said he wants to fill up “with bad dudes.”

The draft orders up recommendations on whether the U.S. should reopen CIA detention facilities outside the United States. Critics said the clandestine sites have marred America’s image on the world stage.

At his news conference, Trump also spoke of his hour-long phone call with Pena Nieto earlier in the day. He described it as a “friendly call” a day after the Mexican leader canceled his visit to Washington after Trump moved forward on his campaign promise to build a border wall and have Mexico pay for it.

Pena Nieto has repeatedly said his country will not pay for construction.

In a statement, the White House said the two leaders acknowledged their “clear and very public differences” and agreed to work through the immigration disagreement as part of broader discussions on the relationship between their countries.

Following the cancellation, Trump’s spokesman said the White House would seek to pay for the border wall by slapping a 20 percent tax on all imports from Mexico, as well as on other countries the U.S. has a trade deficit with. The White House later cast the proposal as just one option to pay for the wall.

The strong reaction from Mexico signaled a remarkable souring of relations between Washington and one of its most important international partners just days into the new administration. The U.S. and Mexico conduct some $1.6 billion a day in cross-border trade, and cooperate on everything from migration to drug enforcement to major environmental issues.

Under a draft of the refugee order Trump was expected to sign at the Pentagon — obtained by The Associated Press — Trump would move to indefinitely stop accepting Syrian refugees into the U.S. The order also calls for a pause in the nation’s broader refugee program for at least 120 days.

Trump campaigned on a pledge to put in place “extreme vetting” procedures particularly for people coming to the U.S. from countries with terrorism ties. According to the draft order, the president plans to suspend issuing visas for people from Iran, Iraq, Libya, Somalia, Sudan, Syria and Yemen for at least 30 days.

Trump has the authority to determine how many refugees are accepted annually, and he can suspend the program at any time. Refugee processing was suspended in the immediate aftermath of the Sept. 11 attacks and restarted months later.

During the past budget year, the U.S. accepted 84,995 refugees, including 12,587 people from Syria. President Barack Obama had set the refugee limit for this budget year at 110,000.

Trump, according to the impending executive order, plans to cut that by more half to 50,000. The draft order says that while the program is suspended, the U.S. may admit people on a case-by-case basis “when in the national interest” and the government will continue to process refugee requests from people claiming religious persecution, “provided that the religion … is a minority religion in the individual’s country.” That suggests it would allow the admission of Christians from Muslim-majority countries.