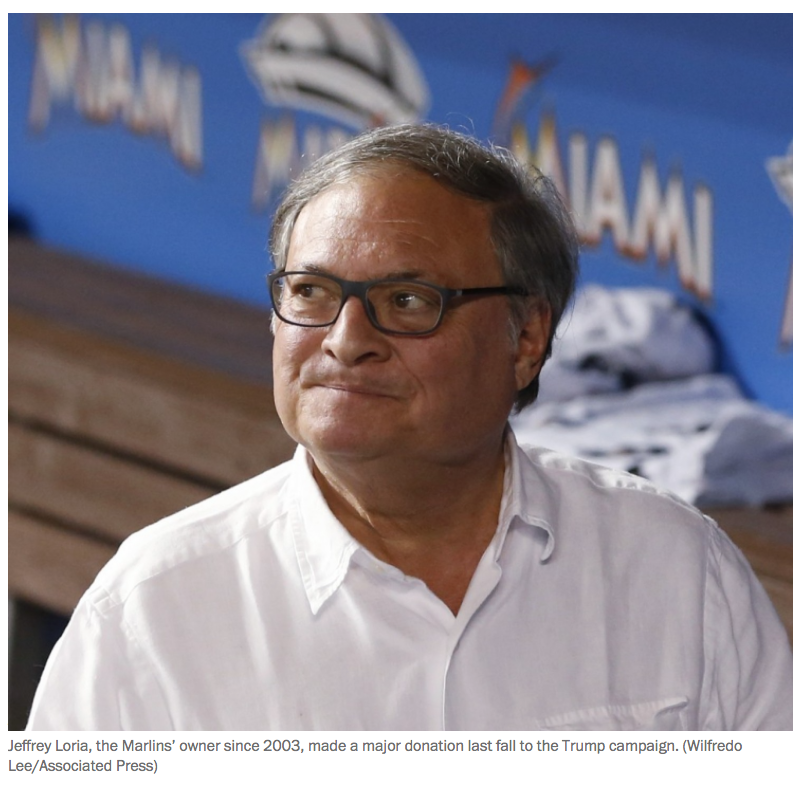 Reports emerged last week that Jeffrey Loria had a “handshake agreement” to sell the Miami Marlins to the family of Jared Kushner, President Trump’s son-in-law and a White House adviser. However, news Wednesday that Loria is being “pushed” by another senior White House official for the position of ambassador to France has the Kushner family backing away from the potential purchase, which could have raised questions about the appearance of a possible quid pro quo involving the administration.

The Miami Herald had reported Wednesday that the Marlins were “focusing all of their potential sale efforts on discussions with New York businessmen Joshua Kushner and Joseph Meyer.” Kushner, 31, is the brother of Jared, who is married to Ivanka Trump. Meyer, 37, married a sister of the Kushner brothers, and he took over as publisher of the New York Observer when Jared stepped down to take a position as a senior adviser to Trump.

In a statement provided to The Post, Meyer said, “Our family has been friends with Jeff Loria for over 30 years, been in business together, and even owned a AAA baseball team together. Although the Kushners have made substantial progress in discussions for us to purchase the Marlins, recent reports suggest that Mr. Loria will soon be nominated by the president to be ambassador to France.

“If that is true, we do not want this unrelated transaction to complicate that process and will not pursue it.  The Kushners remain interested in purchasing a team and would love to buy the Marlins at another time.”

The New York Post reported that Trump’s chief of staff, Reince Priebus, was able to get the president to “sign off” on making Loria his ambassador to France. Priebus is also pushing other “GOP loyalists” for similarly coveted positions, according to the newspaper, which has sparked a “fight between the White House and State Department.”

[Trump will not fill out an NCAA tournament bracket]

Loria was reportedly hoping to complete a $1.6 billion sale of his team to a group led by Kushner, who founded a private equity and venture capital firm, and Meyer, but there were questions about whether they could raise the necessary funding. The Heraldreported that a source said Kushner was “devising a complicated financial arrangement that would include bringing in partners later.” The newspaper also noted that an unidentified “former owner of another big league team would be interested in buying the Marlins if the Kushner deal falls apart.”

According to the New York Post, Secretary of State Rex Tillerson is unhappy that Priebus has circumvented him and pushed certain influential figures directly to Trump for his approval to ambassadorships. Loria donated at least $125,000 to Trump’s campaign in September.

Tillerson reportedly expected to be given two names by the Trump transition team for each ambassadorship and to be able to interview them himself before making the decision on who would get the positions. A State Department official told the New York Post that some of the “people Reince has put up are problematic,” and that “what Reince is doing has to be squared with process and reality.”

[Donald Trump has a long relationship with the world of sports]

The 76-year-old Loria is a widely despised figure in South Florida for keeping the Marlins’ annual payroll among the lowest in MLB, often by purging the team of talented players on the verge of paydays, while getting hundreds of millions in public funding for a new stadium. He went from being a New York art dealer to the owner of the Montreal Expos in the early 2000s, then sold that team, which became the Washington Nationals, in a multiparty transaction that eventually landed him the Marlins in 2003 for $158.5 million.

If he gets the ambassadorship to France, Loria would become the second major sports team owner to be tapped for such a position in the Trump administration, following Jets owner Woody Johnson, who the president announced last month would be his ambassador to the United Kingdom. However, the New York Daily News reported Wednesday that Johnson’s appointment may also be getting held up in the Tillerson-Priebus dispute.

Des writes for the Early Lead and the D.C. Sports Bog, scouring the Web to bring readers items of interest, both serious and amusing. He also covers fantasy football, as well as fitness topics for the MisFits.