WP: Europe has been working to expose Russian meddling for years 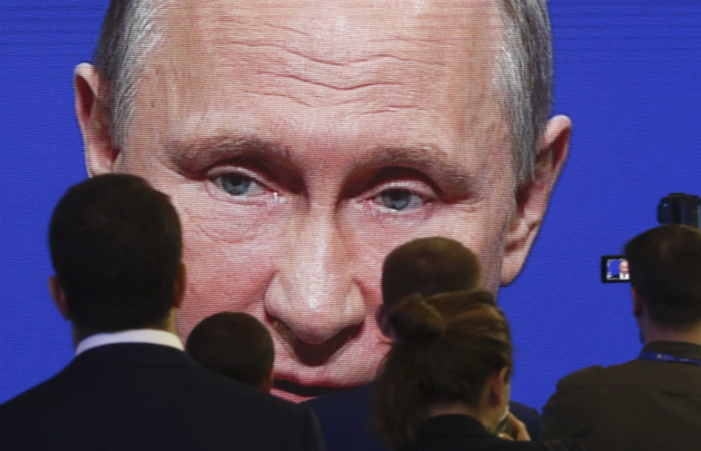 RIGA, Latvia — As the United States grapples with the implications of Kremlin interference in American politics, European countries are deploying a variety of bold tactics and tools to expose Russian attempts to sway voters and weaken European unity.

Across the continent, counterintelligence officials, legislators, researchers and journalists have devoted years — in some cases, decades — to the development of ways to counter Russian disinformation, hacking and trolling. And they are putting them to use as never before.

Four dozen officials and researchers interviewed recently sounded uniformly more confident about the results of their efforts to counter Russian influence than officials grappling with it in the United States, which one European cyber-official described as “like watching ‘House of Cards.’ ”

“The response here has been very practical,” observed a senior U.S. intelligence official stationed in Europe. “Everybody’s looking at it.”

In the recent French elections, the Kremlin-friendly presidential candidate lost to newcomer Emmanuel Macron, who was subjected to Russian hacking and false allegations in Russian-
sponsored news outlets during the campaign. In Germany, all political parties have agreed not to employ automated bots in their social media campaigns because such hard-to-detect cybertools are frequently used by Russia to circulate bogus news accounts.  CLICK IMAGE BELOW for link to WP video. 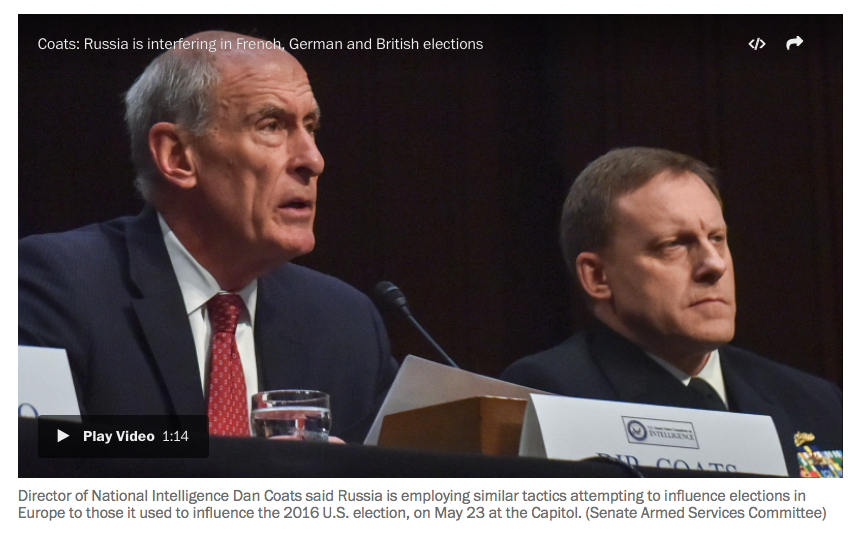 The best antidote to Russian influence, European experts say, is to make it visible.

“We have to prepare the public,” said Patrick Sensburg, a member of the German Parliament and an intelligence expert.

In Lithuania, 100 citizen cyber-sleuths dubbed “elves” link up digitally to identify and beat back the people employed on social media to spread Russian disinformation. They call the daily skirmishes “Elves vs. Trolls.”

In Brussels, the European Union’s East Stratcom Task Force has 14 staffers and hundreds of volunteer academics, researchers and journalists who have researched and published 2,000 examples of false or twisted ­stories in 18 languages in a weekly digest that began two years ago.

“What we try to do centrally in Brussels is put all of those pieces of the jigsaw together,” Giles Portman, head of the task force, said at a conference last year.

And beyond exposing Russian efforts, European countries are also moving to suppress them.

France and Britain have successfully pressured Facebook to disable tens of thousands of automated fake accounts used to sway voters close to election time, and it has doubled to 6,000 the number of monitors empowered to remove defamatory and hate-filled posts.

The German cabinet recently endorsed legislation — now before Parliament — to impose fines of up to $53 million on social-media companies that fail to remove posts deemed to be “hate speech.” Some especially notorious recent examples concerning migrants have been traced to Russian origins.

And sometimes the effort goes face-to-face. Here in Riga, Vladi­mir Dorofeev, a 42-year-old reporter for the Kremlin’s Sputnik news site, widely regarded as a conduit for propaganda as well as news, found out personally how Latvian authorities deal with the challenge.

In Dorofeev’s first week on the job, the Latvian Security Police questioned him about Sputnik’s local staff size, its editor and its payment procedures.

“Aren’t you ashamed of yourself?” he said they asked him. “Do you understand they can use you?”

His answers went into the files, to become part of a standing counterintelligence investigation, the kind Latvia has undertaken to ferret out clandestine Russia meddling since it broke free of the Soviet Union in 1991.

“Maybe this is new to the Western world, but not for us,” said Normunds Mezviets, the security service chief here. “For 20 years, we’ve been calling attention to this. There is no reason to panic.”

Russia has not hidden its liking for information warfare. The chief of the general staff, Valery Gerasimov, wrote in 2013 that “informational conflict” is a key part of war. Actual military strength is only the final tool of a much subtler war-fighting strategy, he said. This year, the Defense Ministry announced the creation of a new cyberwarrior unit.

No longer able to compete in conventional military terms — the U.S. defense budget is about eight times larger than Russia’s — Moscow has emphasized this less expensive but difficult-to-thwart tactic. “Weaponizing information” involves the dissemination of factual distortions and outright lies to achieve political ends. It builds on decades of experience wielding propaganda, going back to the Soviet era. In that sense, Europe has had more years of exposure than the United States.

“There has always been Russian propaganda, false information, attempts to smear people — that’s nothing new,” said Carl Bildt, a former prime minister of Sweden who was in Tallinn, Estonia, recently for a cybersecurity conference.

What is undeniably new, though, is the digital sophistication that Moscow can now employ: hacking and releasing documents from the Democratic National Committee and the campaign of France’s Macron, for example, or infiltrating the network of the German Parliament. Russian officials have denied hacking France and Germany and have tended to shrug off the wider allegations, with President Vladimir Putin calling them “nonsense.”

Putin’s apparent goal, intelligence officials and Russian experts say, is to weaken Western unity, restore Russia’s influence in the world and, not least, shore up support at home.

Especially since Putin’s return to the presidency in 2012, the Kremlin has portrayed the West as Russia’s principal antagonist — supporting popular revolutions in Libya, Ukraine and Syria; backing pro-democracy civil society groups, including independent media; and, more recently, deploying NATO troops in four countries that border Russia.

Russians began experimenting with information warfare 10 years ago in Estonia, followed by attempts at disruption in Georgia, Kyrgyzstan, Kazakhstan, Finland, Bosnia and Macedonia. But the full power of the disinformation arsenal became apparent only in 2014, following the street protests that overthrew the corrupt, Moscow-friendly government of Ukraine.

As Russian troops, in uniforms without insignia, seized Crimea, Russian media portrayed the fighters loyal to the new government in Kiev as Western-backed fascists and Nazis intent on massacring the Russian-speaking population in eastern Ukraine. That version of events didn’t get much traction in the West, but it was effective in the regions of Donetsk and Luhansk, where Russian-backed separatists were quick to launch insurgencies. Washington, the Russian press said, was preparing for World War III against Russia.

The disinformation was effective at home in Russia, too.

U.S. and European intelligence agencies, research groups and journalists describe the Russian disinformation campaign in Europe as an online network of networks that together amplify particular, distorted, anti-Western themes and news items by using hidden ownership, trolls and automated bots.

In Eastern Europe, hours of combative political talk shows on Russia’s domestic channels, featuring Russian nationalists tearing down Western straw men to the roar of approving audiences, carry past borders by way of the Internet and airwaves to reach Russian-speaking populations. In many of Russia’s immediate neighbors, there are no Russian-language alternatives to the channels and websites backed by Moscow.

In Scandinavia, Russian efforts are more devoted to the harassment of mainstream journalists and online trolling on social media and news websites.

In Western Europe, local-
language versions of the Russian outfits RT and Sputnik use automated bots and Twitter and Facebook accounts to spread their spin to far-right and far-left news websites, from which it sometimes seeps into the mainstream media.

“These are pretty well-
designed messages for local audiences,” said Jakub Janda, the deputy director of the Prague-based European Values think tank. “They’re targeting local ­decision-makers and the public, and they’re trying to shift their opinions.”

Monitoring these so-called news websites has become a core mission for some security services. In Sweden, the Swedish Civil Contingencies Agency, which usually prepares for chemical spills, bomb threats and natural disasters, is also monitoring websites for exaggerated news stories about refugees and crime, subjects “the Swedish population is afraid of right now,” said Mikael Tofvesson, who heads the agency.

“Those are our vulnerabilities,” he said.

“Most of the malicious activities are aimed at eroding trust within our societies between different groups, political movements, the elites and the people,” said Jonatan Vseviov, permanent secretary of Estonia’s Ministry of Defense.

Russia’s efforts in Estonia have not had much success to date, largely because many in society are aware of such propaganda, the government is vigilant and the nation’s ethnic Russians have little desire to join with the Kremlin because they live better in Estonia than they would across the border, analysts say.

The counterassault in Europe involves researchers in Britain, France, Germany, the Czech Republic, the Netherlands, Switzerland, Finland, Sweden, Ukraine and Latvia. In Slovakia, some 1,400 advertisers have agreed to boycott a list of false, conspiratorial websites compiled by one nonprofit research organization.

Political leaders also are appealing to the public and mainstream media to ignore predictable releases of embarrassing documents stolen by Russian hackers in an effort to tip elections in favor of pro-Russian candidates. In France, the media complied with a government ban on reporting documents stolen from Macron’s campaign and published less than 48 hours before voting.

Consortiums such as StopFake.org, about Ukraine, and Correctiv.org in Germany have sped up fact-checking with new digital tools and with cross-
border journalistic partnerships.

Traditional news organizations have increased fact-checking, too, with projects such as Le Monde’s Decodex in France and BBC’s RealityCheck. And they have developed tools readers can use to identify what they call “fake news” outlets.

In April, her website published an article under the headline “Three Baltic Russian-language news sites known collectively as Baltnews are secretly linked to the Kremlin’s global propaganda network.” Using a clue originally unearthed by the Estonian security service, Re:Baltica painstakingly traced the websites’ ownership from Latvia to the Netherlands and then to Rossiya Segodnya, a news agency owned and operated by the Russian government.

“It was our biggest scoop,” said Springe, who said she was surprised “the Kremlin didn’t try to hide the network behind more offshore companies.”

“It also proved our suspicions,” she said, that the Kremlin controls considerably more media networks outside Russia than it chooses to admit.

Birnbaum reported from Tallinn, Estonia. Ellen Nakashima in Tallinn contributed to this report.