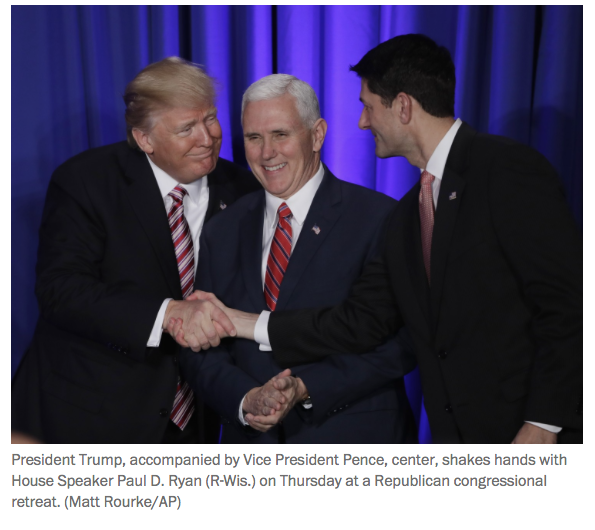 PHILADELPHIA — Republican lawmakers aired sharp concerns about their party’s quick push to repeal the Affordable Care Act at a closed-door meeting Thursday, according to a recording of the session obtained by The Washington Post.

The recording reveals a GOP that appears to be filled with doubts about how to make good on a long-standing promise to get rid of Obamacare without explicit guidance from President Trump or his administration. The thorny issues with which lawmakers grapple on the tape — including who may end up either losing coverage or paying more under a revamped system — highlight the financial and political challenges that flow from upending the current law.

Senators and House members expressed a range of concerns about the task ahead: how to prepare a replacement plan that can be ready to launch at the time of repeal; how to avoid deep damage to the health insurance market; how to keep premiums affordable for middle-class families; even how to avoid the political consequences of defunding Planned Parenthood, the women’s health-care organization, as many Republicans hope to do with the repeal of the ACA.

“We’d better be sure that we’re prepared to live with the market we’ve created” with repeal, said Rep. Tom McClintock (R-Calif.). “That’s going to be called Trumpcare. Republicans will own that lock, stock and barrel, and we’ll be judged in the election less than two years away.” 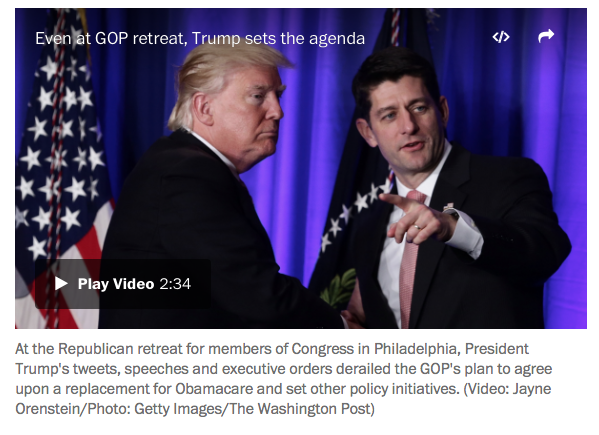 Recordings of closed sessions at the Republican policy retreat in Philadelphia this week were sent late Thursday to The Post and several other news outlets from an anonymous email address. The remarks of all lawmakers quoted in this article were confirmed by their offices or by the lawmakers themselves.

“Our goal, in my opinion, should be not a quick fix. We can do it rapidly — but not a quick fix,” said Sen. Lamar Alexander (R-Tenn.). “We want a long-term solution that lowers costs.”

Sen. Rob Portman (R-Ohio) warned his colleagues that the estimated budget savings from repealing Obamacare — which Republicans say could approach a half-trillion dollars — would be needed to fund the costs of setting up a replacement. “This is going to be what we’ll need to be able to move to that transition,” he said.

Rep. Pete Sessions (R-Tex.) worried that one idea floated by Republicans — a refundable tax credit — would not work for middle-class families that cannot afford to prepay their premiums and wait for a tax refund.

Republicans have also discussed the idea of generating revenue for their plan by taking aim at deductions that allow most Americans to get health insurance through their employers without paying extra taxes on it. Sen. Bill Cassidy (R-La.), who has drafted his own bill to reform the Affordable Care Act, said in response, “It sounds like we are going to be raising taxes on the middle class in order to pay for these new credits.”

Rep. Kevin Brady (R-Tex.), who chairs a key tax-writing subcommittee, countered, “I don’t see it that way,” adding that there is “a tax break on employer-sponsored health care and nowhere else” equal to $3.6 trillion over 10 years.

“Could you unlock just a small portion at the top to be able to give that freedom [to self-employed Americans]? That is the question,” Brady said.

Rep. John Faso (R-N.Y.), a freshman congressman from the Hudson Valley, warned strongly against using the repeal of the ACA to also defund Planned Parenthood. “We are just walking into a gigantic political trap if we go down this path of sticking Planned Parenthood in the health insurance bill,” he said. “If you want to do it somewhere else, I have no problem, but I think we are creating a political minefield for ourselves — House and Senate.”

The concerns of rank-and-file lawmakers appeared to be at odds with key congressional leaders and Andrew Bremberg, a top domestic policy adviser to Trump, who have laid out plans to repeal the ACA using a fast-track legislative process and executive actions from the administration. However, these leaders acknowledged in Thursday’s meeting, as they have before, that Obamacare cannot be fully undone — or replaced — without Democratic cooperation.

That and other aspects of the unfinished GOP plan prompted several wary lawmakers to urge their leaders to move more deliberately — even as the Trump administration appears to be moving ahead with repeal. Thursday, the White House ordered federal health officials to immediately halt all advertising and other outreach activities for the critical final days in which Americans can sign up for 2017 health coverage through Affordable Care Act marketplaces.

The administration partly retracted that directive on Friday, allowing the Department of Health and Human Services to continue to contact people eligible for ACA coverage by email, text and automated phone calls, and reviving use of a HealthCare.gov Twitter account.The new directive also allows airing of some ads if the government would otherwise lose the money it paid for them upfront.

House Speaker Paul D. Ryan (R-Wis.) dismissed the concerns aired in the meeting during an interview at a Politico event Friday.

“We have a responsibility to work for the people that put us in office,” he said. “That’s the oath we take: to defend the Constitution, to fight for the people we represent, and this is a fiasco that needs to be fixed.”

Of particular concern to some Republican lawmakers was a plan to use the budget reconciliation process — which requires only a simple majority vote — to repeal the existing law, while still needing a filibuster-proof vote of 60 in the Senate to enact a replacement.

“The fact is, we cannot repeal Obamacare through reconciliation,” McClintock said. “We need to understand exactly: What does that reconciliation market look like? And I haven’t heard the answer yet.”

Several important policy areas appeared unsettled. While the chairmen of key committees sketched out various proposals, they did not have a clear plan for how to keep markets viable while requiring insurers to cover everyone who seeks insurance.

At one point Cassidy, a physician who co-founded a community health clinic in Baton Rouge to serve the uninsured, asked the panelists a “simple question”: Will states have the ability to maintain the expanded Medicaid rolls provided for under the ACA, which now provide coverage for more than 10 million Americans, and can other states do similar expansions?

“These are decisions we haven’t made yet,” said House Energy and Commerce Committee Chairman Greg Walden (R-Ore.).

Republicans are also still wrestling with whether Obamacare’s taxes can be immediately repealed, a priority for many conservatives, or whether that revenue will be needed to fund a transition period.

And there seems to be little consensus on whether to pursue a major overhaul of Medicaid — converting it from an open-ended entitlement that costs federal and state governments $500 billion a year to a fixed block grant. Trump and his top aides, including counselor Kellyanne Conway, have publicly endorsed that idea. But doing so would mean that some low-income Americans would not be automatically covered by a program that currently covers 70 million Americans.

Many of the concerns aired Thursday were more political than policy-oriented. Faso’s remarks about Planned Parenthood generated tepid applause. Ryan said this month that he expects the House to pursue the organization’s defunding in the reconciliation bill.

Those expressing qualms included some of the top congressional leaders who are in line to draft the health-care legislation. Alexander, for one, is chairman of the Senate Health, Education, Labor and Pensions Committee.

Ryan and other leaders have said they intend to pursue a piecemeal approach, following the reconciliation bill with smaller ones that address discrete aspects of reform.

Instead, he pointed to the executive order Trump signed last week, his first, as proof of his commitment to undoing Obamacare’s mandates and said his choice of Rep. Tom Price (R-Ga.) to be his health and human services secretary “should speak volumes to people trying to understand what he’s hoping to achieve.”

“This is not a technocrat,” Bremberg said. “This is an experienced, compassionate doctor who has experienced the health-care system firsthand and who has been a leader here in Washington trying to address the policy reforms that need to take place. Having both of those in a secretary is going to be very important and very powerful.”

Even as Bremberg offered few details about what the president plans to do, he emphasized that last week’s executive order “repeatedly” used phrases “such as ‘to the maximum extent permitted by law’ ” to enable his political appointees to start dismantling the ACA by executive authority.

“I’m sure many of us have been very concerned about the interpretation of that phrase in the last six or so years,” Bremberg quipped, referring to the previous administration. “The president has now officially given direction [not only] to HHS, but to all of these agencies that have responsibility . . . to exercise all available discretion to begin helping the American people and to begin fixing our health-care system.”

The White House did not immediately respond to a request for comment on Bremberg’s remarks.

Faso warned that by defunding Planned Parenthood in the reconciliation bill, “we are arming our enemy in this debate.”

“To me, us taking retribution on Planned Parenthood is kind of morally akin to what Lois Lerner and Obama and the IRS did against tea party groups,” he said, a reference to accusations that the Internal Revenue Service improperly targeted conservative political groups for audits.

Faso continued: “Health insurance is going to be tough enough for us to deal with without having millions of people on social media come to Planned Parenthood’s defense and sending hundreds of thousands of new donors to the Democratic Senate and Democratic congressional campaign committees. So I would just urge us to rethink this.”

Mike DeBonis covers Congress and national politics for The Washington Post. He previously covered D.C. politics and government from 2007 to 2015. Follow @mikedebonis

WP: Behind closed doors, Republican lawmakers fret about how to repeal Obamacare added by Peter Lance on January 28, 2017
View all posts by Peter Lance →