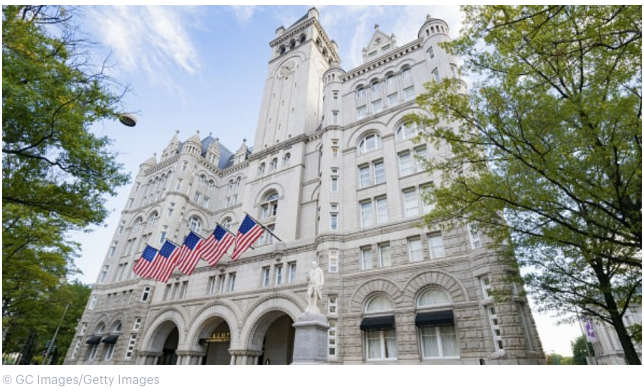 President Trump’s hotel in Washington is in violation of its lease with the government and could also run afoul of a Constitutional clause meant to thwart foreign influence in politics, according to a watchdog group.

Citizens for Responsibility and Ethics in Washington (CREW) sent a letter about the hotel to the General Services Administration (GSA) immediately after Trump’s swearing in.

The letter urges the agency to terminate Trump’s lease on the federally owned hotel building if the new president retains his business interest.

Trump has a trust—the Donald J. Trump Revocable Trust—that holds dozens of assets, including one containing a majority stake in the LLC holding the lease with GSA.

In a press conference earlier this month, Trump’s lawyer said that he would not be divesting from any of his investments, but rather handing over control to his sons. He would also not be given any kind of detailed statements about the performance of any of his companies, instead receiving only broad notifications about overall profits or losses.

“The lease bans elected officials from benefitting to avoid conflicts of interest with their duties,” said CREW Executive Director Noah Bookbinder in a statement.

“We know Trump likes to renegotiate contracts for better deals. If that happened here, it will be the President negotiating against the government he leads. His best interests are not the same as those of the American tax payer,” he said.
Critics have taken issue with Trump’s refusal to divest or place his assets into a blind trust, which would separate him entirely from his business empire.Critics have taken issue with Trump’s refusal to divest or place his assets into a blind trust, which would separate him entirely from his business empire.
The Trump International Hotel, located only blocks from the White House and the Capitol, could also violate the emoluments clause of the Constitution that prevents foreign leaders from giving gifts to government officials.
Following Trump’s victory in the presidential election, foreign diplomats have been renting out space for events at Trump’s hotel. There is a worry that these high-dollar payments could be used to curry favor with the administration.
“He just swore on the Bible to ‘preserve, protect and defend the Constitution of the United States,’ but by continuing to accept payments from foreign governments, he has already failed,” Bookbinder said in the statement, just after Trump took the oath of office.
Trump’s attorney, Sheri Dillon, said in the ethics press conference that the president would give any profits from the hotel originating from a foreign government to the U.S. Treasury.
Ethics experts were not assuaged by the argument, saying that the conflict could still exist if foreign governments see a stay at Trump’s hotel as helping to benefit the government and therefore looked upon favorably by Trump officials.
“We do not yet know just to what extent this violation [of the emoluments clause] goes—because he is the first person elected to the presidency in decades to fail to clear the ethical bar of Richard Nixon and release his tax returns, much of his foreign business has remained secret,” Bookbinder says.
Lawmakers in Congress have introduced a bill that would force presidential candidates to release their tax returns in response to Trump’s refusal to put out his past tax records.
GSA has said it would not make a determination about whether Trump’s presidency is a breach of the lease agreement “until the full circumstances surrounding the president elect’s business arrangements have been finalized and he has assumed office,” CREW’s letter mentions.
“GSA understands that an announcement has been made to change the business structure of the Trump Organization. We are seeking additional information that explains and describes any new organizational structure as it applies to the Old Post Office lease,” the agency said in a release following Trump’s ethics press conference.
“Upon receipt, consistent with our treatment of any contract to which we are a party, we will review this new organizational structure and determine its compliance with all the terms and conditions of the lease,” GSA said.
It did not immediately return an inquiry about whether Trump’s new business structure violates the lease and if it would move to terminate it.