The Guardian: Fire and Fury: Inside the Trump White House – Digested Read

By Peter Lance on January 15, 2018Comments Off on The Guardian: Fire and Fury: Inside the Trump White House – Digested Read 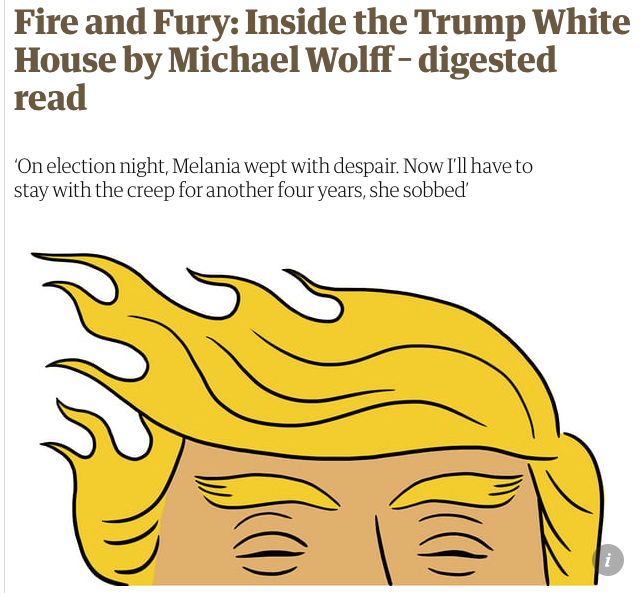 On a snowy January evening in 2017, disgraced head of Fox News Roger Ailes and Donald Trump’s right-hand man Steve Bannon met for dinner in a New York brownstone. “We’ve got a problem,” said Bannon. “Trump doesn’t get it. He doesn’t realise the bad guys are the bad guys.”

CLICK IMAGE ABOVE for direct link to story in The Guardian.

“There’s only one thing for it,” replied Ailes. “We’ve got to bring in Michael Wolff to write a book about him. He can be relied on to be as unreliable as the Donald. Hopefully, no one will believe a word.”

A couple of months earlier, on election night, Trump and his family were gathered in the penthouse of Trump Tower. The mood was buoyant. The plan had always been to lose the presidency and the polls seemed to confirm he was on track. Then the first results came in.

“I’ve done it! I’ve done it!” yelled Trump. “Congratulations Mr President!” said his son-in-law Jared Kushner. “Thank you,” said Trump. “It’s taken me weeks to get to the next level of Call of Duty. But who are you calling Mr President?”

Melania crept off to her bedroom to weep bitter tears of despair. “Now I’ll have to stay with the creepy pussy-grabber for at least another four years,” she sobbed. “Never mind,” said Wolff, leaping out of a cupboard. “At least you’ve got me.”

The early days of the presidency were spent turning the Oval Office into a soft-play area with three TVs tuned to cartoon channels. This suited Trump perfectly as it allowed him to get on with not running the country. “I’m going to Make America Great Again bigly. So bigly you won’t believe it. FACT!” he would repeat, while stuffing his face with a Big Mac.

For Bannon, the main priority was to help Trump with his remedial reading lessons and to stop world leaders phoning him. Life went much more smoothly when there was nothing going on to remind the president he was the president. “He’s a fucking idiot,” declared Rupert Murdoch after being accidentally put through to Trump during a cartoon ad break. “No, he’s not,” said Ivanka, who still hadn’t gotten over the fact she wasn’t president. “He’s actually a cretin.”

“You’re not going to believe this,” Bannon told Wolff. “But the president is near enough certifiable and has the mental age of a five year old.”

With the Lego wall in his bedroom the only part of his programme to take shape, Trump began to get frustrated. To relieve the boredom, he decided to sack most of the people in his office, along with the director of the FBI, before retreating to Mar-a-Lago for a round of golf where he got the Japanese prime minister to caddy for him before asking: “What shithole country is Japan in?”

This only added to the pressure and his remaining aides became increasingly concerned about the administration’s total failure when Trump did once appear to do something that seemed vaguely rational. Though no one could quite remember what it was. Even Wolff was concerned that his book might be turning into a collection of facts that most people already knew.

Normality soon resumed, however, with Trump beginning each day by attaching weights to the end of his penis in order to increase its size. “I have the biggest penis, the biggest. I really do. That’s a fact,” he would tweet, before spraying himself with disinfectant and going off on a playdate with Tony Blair.

“Thanks so much for coming over to the US, Tony,” said Wolff. “It will be a big boost to UK sales. Now can I quote you as saying that British intelligence services were bugging Trump?”

Six months in and the White House was in paralysis, with Trump having run out of people to sack. General Kelly took charge after suggesting the president start a nuclear war with North Korea.

“It’s all absolutely terrible,” said Bannon from the bedsit where he was now living.

If everyone who reads our reporting, who likes it, helps fund it, our future would be much more secure. For as little as $1, you can support the Guardian – and it only takes a minute. Thank you.