Politico: Trump steps in to keep 30-year-old NSC aide Bannon and Kushner prevail on the president to override his national security adviser and keep a Flynn protégé. 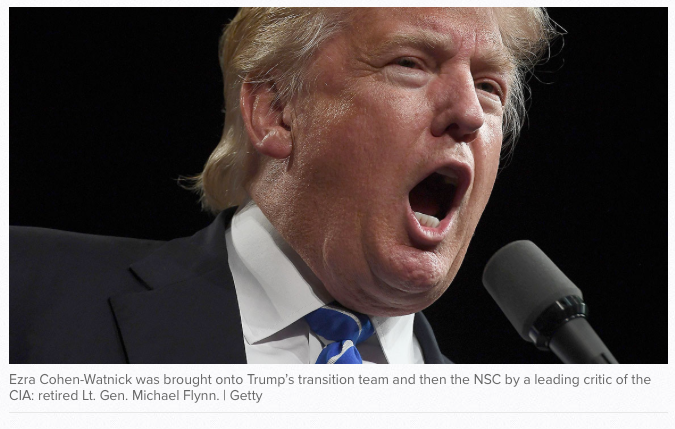 President Donald Trump has overruled a decision by his national security adviser, Lt. Gen. H.R. McMaster, to sideline a key intelligence operative who fell out of favor with some at the Central Intelligence Agency, two sources told POLITICO.

CLICK IMAGE ABOVE for direct link to POLITICO story.

On Friday, McMaster told the National Security Council’s senior director for intelligence programs, Ezra Cohen-Watnick, that he would be moved to another position in the organization.

The conversation followed weeks of pressure from career officials at the CIA who had expressed reservations about the 30-year-old intelligence operative and pushed for his ouster.

But Cohen-Watnick appealed McMaster’s decision to two influential allies with whom he had forged a relationship while working on Trump’s transition team — White House advisers Steve Bannon and Jared Kushner. They brought the matter to Trump on Sunday, and the president agreed that Cohen-Watnick should remain as the NSC’s intelligence director, according to two people with knowledge of the episode.

The incident raises questions about just how much autonomy Trump is giving to McMaster, who was tapped last month as national security adviser amid questions about whether he’d have full staffing authority over the NSC.

It also highlights ongoing tensions between the CIA and Trump aides who are skeptical of the agency, feeding into concerns expressed by the president and his allies about the intelligence community.

Trump has questioned the intelligence agencies’ findings that Russia tried to boost his campaign by hacking emails from allies of his Democratic rival Hillary Clinton, and some of his allies have leveled allegations — much derided in the media — that there’s a “deep state” of career intelligence officers who are looking to undermine the new president, and to consolidate their power in the Trump era.

Cohen-Watnick was brought onto Trump’s transition team and then the NSC by a leading critic of the CIA: retired Lt. Gen. Michael Flynn, who was Cohen-Watnick’s boss at the Defense Intelligence Agency and preceded McMaster as national security adviser.

Cohen-Watnick and Flynn “saw eye to eye about the failings of the CIA human intelligence operations,” said a Washington consultant who travels in intelligence circles. “The CIA saw him as a threat, so they tried to unseat him and replace him with an agency loyalist,” the operative said.

Cohen-Watnick, Kushner and Bannon did not respond to requests for comment. The White House press office referred questions to the NSC. Spokesman Michael Anton declined to comment.

“Mike Pompeo [the CIA director] is focused completely on ensuring that CIA is doing everything in its power to provide policymakers with the best intelligence possible and to protect the nation against adversaries,” said Boyd.

Some Trump allies harbor a deep distrust of the agency and see Flynn’s ouster as an example of how the CIA is trying to undermine the new administration.

Flynn resigned under pressure after it was reported last month that he had misled Vice President Mike Pence by telling him that during the transition, he had not discussed U.S. sanctions against Russia with Russian ambassador Sergey Kislyak. In fact, Kislyak touched on the subject with Flynn in several conversations monitored by U.S. intelligence agencies. The Washington Post cited nine current and former senior officials describing the calls.

Even before Flynn’s dismissal, one of his top deputies, Robin Townley, a senior director for Africa, was forced out after the CIA rejected his request for the high-level security clearance required for service on the NSC. Some Trump allies contend that the grounds upon which the security clearance was denied were shaky at best, and that the real reason was that Townley was a Flynn loyalist who had voiced skepticism of the CIA’s intelligence-gathering techniques.

House Intelligence Committee Chairman Devin Nunes, a close Trump ally, has asked the Federal Bureau of Investigation to investigate the leaks of classified information that produced a series of damaging media reports, including the Flynn calls, as well as alleged leaks related to the rejection of Townley’s security clearance.

In an interview on Fox News last month, Nunes called the leaks “totally unacceptable.” And, he added, “I think most of this is probably from people who were in the old administration, but there still could be some people that have burrowed in and are providing classified information to the media.”

Politico: Trump steps in to keep 30-year-old NSC aide Bannon and Kushner prevail on the president to override his national security adviser and keep a Flynn protégé. added by Peter Lance on March 14, 2017
View all posts by Peter Lance →