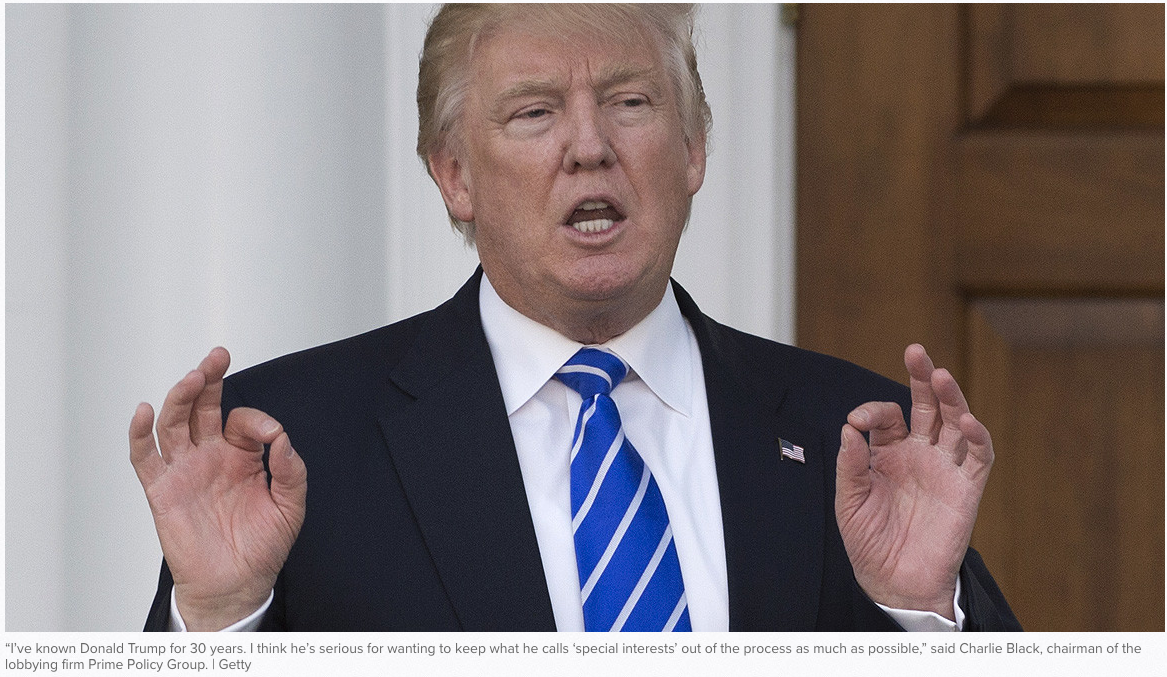 The transition made a big show of sidelining lobbyists, but they found ways to stay involved anyway.

Despite President-elect Donald Trump’s much-publicized efforts to keep lobbyists out of his administration, they have continued to offer policy advice, recommend job candidates and contribute money to his transition team, according to a POLITICO investigation.

And while they’re barred from donating to the $200 million in inaugural festivities this week, lobbyists have been collecting checks on Trump’s behalf, according to four lobbyists interviewed by POLITICO who are directly helping raise the funds.

The loopholes in Trump’s restrictions are so widespread that many lobbyists said they’ve concluded Trump’s ethics rules aren’t really meant to change how business is done in Washington.

“I’ve known Donald Trump for 30 years. I think he’s serious for wanting to keep what he calls ‘special interests’ out of the process as much as possible,” said Charlie Black, chairman of the lobbying firm Prime Policy Group. “But that said, he kind of knows how these things work.”

Indeed, Black — whose firm represents Google, the drug titan GlaxoSmithKline, and telecommunications giant AT&T, among other major industry players — has been helping Trump by passing along résumés for key positions in federal agencies to members of the transition team.

And that’s just one of the work-arounds that lobbyists have utilized to maintain their ties to the president-elect.

For instance, while registered lobbyists aren’t allowed inside the transition team’s D.C. headquarters, they’ve been able to join top transition officials for lunch and meet with them at other organizations’ offices. Meanwhile, the transition team itself allowed lobbyists to attend unpublicized “listening sessions” on issues including technology, health care and Native American issues held at other groups’ offices before the holidays, lobbyists and others present told POLITICO.

Trump, who won applause during the campaign for his oft-quoted pledge to “drain the swamp” in Washington, came under fire shortly after his election for the presence of numerous lobbyists on his transition team. In a dramatic move, the president-elect replaced transition chairman Chris Christie with Vice President-elect Mike Pence and ordered that lobbyists be banned from the team.

Eight years earlier, President Barack Obama had banned his transition members from working on any issue for which they had lobbied over the past year. Trump, in theory, went further, banning lobbyists entirely. But he allowed them to stay and work on issues for which they had lobbied as long as they suspended their clients, which some did. They are free to resume lobbying once they leave, as long as they refrain for six months from working on the specific issues they worked on.

Obama banned lobbyists from contributing to his inauguration or his transition team. Trump’s ban extends only to the inauguration. Thus, lobbyists are still donating to the transition itself while shifting their focus to collecting checks from others to help cover the inauguration, according to lobbyists interviewed by POLITICO, who represent industries ranging from finance to pharmaceuticals.

It’s unclear how much they’ve collected, since neither the Trump transition team nor the inaugural committee will have to disclose their funding until after the inauguration.

The loopholes have led some lobbyists to conclude the transition was happy to hear from them, as long as the media and the public didn’t see it happening.

“When you campaigned on ‘drain the swamp,’ you don’t want visitor logs full of lobbyists and reporters getting pictures of Jack Gerard and Tom Donohue leaving the transition office,” a Republican lobbyist said, referring to the CEOs of the American Petroleum Institute and the U.S. Chamber of Commerce. But, the lobbyist added, “Who else are you going to talk to?”

Trump spokeswoman Hope Hicks declined to address specific cases but wrote in an email, “As long as you reference the steps we’ve taken to root out lobbyists, which are unprecedented, we don’t have anything to add.”

ndeed, Trump has pledged to ban all his administration officials from lobbying for five years after they leave government service. Obama’s rules are far less stringent: Former officials can’t lobby their former agencies for two years.

But when it comes to the transition, Trump’s rules have been easier for lobbyists to thwart. Paul Miller, president of the National Institute for Lobbying & Ethics, a trade group, said he feels the regulations are mostly for show.

“They’re encouraging those loopholes,” he said. “It does nobody any good.”

For instance, another way lobbyists have found to get around the meeting ban is by sending policy input in writing. Aviation lobbyist Mike Korens said transition officials told him they could not meet with him but that he could send them comments about restructuring the air traffic control system, he told POLITICO.

Korens, a former Republican counsel to the Senate aviation subcommittee and a member of the Bush-Cheney transportation transition, asked whether he could also share thoughts about Open Skies, an international agreement that has been a source of frustration for U.S. airlines and that foreign carriers want to preserve. Korens proceeded to run a draft of his submission by his client, Emirates Airlines, according to emails posted to an industry email list.

“Hits the spot,” Tim Clark, the state-owned airline’s president, said in response, according to the email obtained by POLITICO.

In an interview, Korens said the email was inadvertently sent to the email list, whose rules prohibit sharing posts with reporters. He also defended his interaction with the transition.

“I was upfront with them about the fact that I’m a registered lobbyist, and they were upfront with me about the rules,” he said. “They said ‘Sorry, Mike, we cannot meet with you, but if you would like to submit your input we’ll consider it.’”

Dan Elwell, an aviation consultant on the transition’s landing team for the Federal Aviation Administration, declined to comment.

In some cases, the Trump transition team has openly welcomed input from lobbyists, especially through the little-noted informational seminars held over the holidays.

At one such event, held for Native American tribes shortly before Christmas, well over a dozen lobbyists packed into a room with tribal leaders, Hill aides and others for a “listening session” presided over by Rep. Markwayne Mullin (R-Okla.), chairman of Trump’s Native American Coalition. The event was organized by a cultural nonprofit called the Western Caucus Foundation.

The Trump team also met with energy industry representatives in December at the National Association of Manufacturers’ office and discussed policy papers prepared by the trade group. The transition held separate sessions at which technology and health care lobbyists were present, according to attendees who were themselves lobbyists.

The Trump transition did not disclose or publicize those events. By contrast, the Obama transition took the extra step of disclosing its meetings and the documents it received from outside groups.

“The experts with whom a transition team meets are arguably as important as the team members, themselves,” the watchdog group Public Citizen said in an open letter pressing the Trump team to take the same transparency measures.