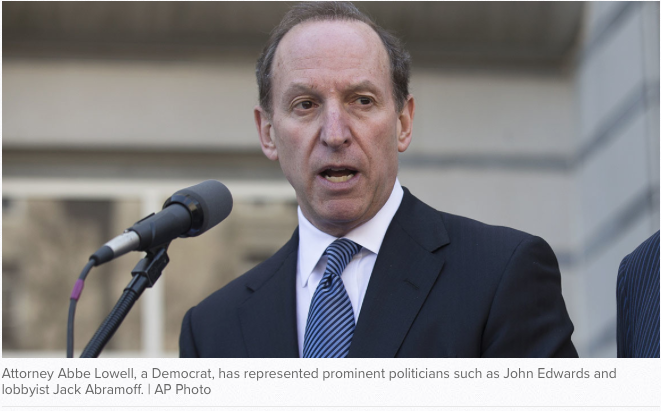 Jared Kushner has hired Abbe Lowell, one of the country’s leading criminal defense lawyers, to represent him in the special counsel’s probe of potential Russian collusion with the Trump campaign and his financial dealings, as well as in separate congressional inquiries.

CLICK IMAGE above for direct link to Politico story.

But Kushner has also decided to keep Jamie Gorelick, his current lawyer and a WilmerHale partner, on his legal team, a spokesman said in response to questions. Some close to Kushner have raised questions about Gorelick remaining on his team because Bob Mueller, the special counsel, was previously a partner at WilmerHale.

“When Bob Mueller left WilmerHale to become Special Counsel and three of our colleagues joined him, we asked Mr. Kushner to get independent legal advice on whether to continue with us as his counsel. He engaged Abbe Lowell to advise him and then decided to add Mr. Lowell to the team representing him in the various inquiries into the Russia matter,” a Monday statement from Gorelick said.

Lowell, a Democrat, has represented prominent politicians such as John Edwards and lobbyist Jack Abramoff. He didn’t respond for comment Monday afternoon. Lowell is currently representing New Jersey Sen. Bob Menendez, who is charged with corruption and faces a trial later this year. He was also chief minority counsel to the Democrats during the Bill Clinton impeachment proceedings.

Kushner has not been charged with wrongdoing and has said he plans to cooperate with all inquiries.