NYT: Why Being Donald Trump Jr., the Businessman, Won’t Be Easy 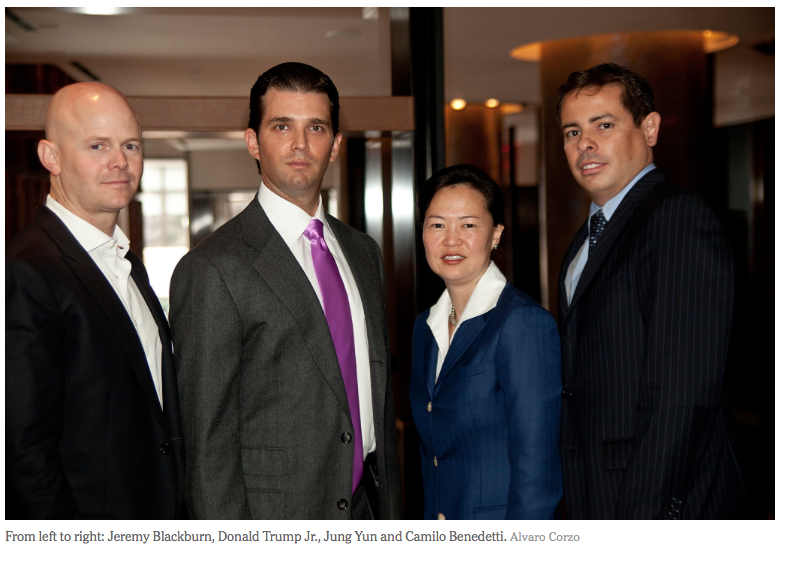 Donald Trump Jr. struck a pose in this 2010 photograph befitting a serious young businessman on the rise.  CLICK IMAGE for link to story.

When it was taken at the Trump SoHo hotel in New York, Mr. Trump was 32 years old and playing a growing role inside the Trump Organization. He was also looking to step outside the shadow of his father, Donald J. Trump, and make his own mark.

In the photo, he stands with three associates involved in ventures he was considering, including potential opportunities in South America. The picture first appeared with an article in a Colombian newspaper, El Espectador. In the article, published in 2010, Mr. Trump discussed business opportunities the Trump Organization was eyeing in Colombia.

Today, his father is the president, and the younger Mr. Trump has become one of the highest-profile business figures in the United States. He and his younger brother Eric now run the Trump Organization on a day-to-day basis.

As Mr. Trump recently discussed, he is aware that his future business partners and any deals he strikes with them will face intense scrutiny. Yet little is known about his business past, aside from an ill-starred investment in South Carolina. A look at the people in the seven-year-old image provides a peek at some of his past associates, how they interacted with him and what they are doing today. One filed for personal bankruptcy, another faces $100,000 in unpaid tax liens, and another is focused on real estate and construction in Miami. Mr. Trump declined to be interviewed for this article.

Of the people in this photograph, Mr. Blackburn has worked most closely with Donald Trump Jr. The two men initially met in the early 2000s and, in 2010, they formed a business together called Titan Atlas Manufacturing whose aftermath still dogs the president’s son.

In the intervening years, Mr. Blackburn, 44, helped start a Utah bank that federal regulators were later forced to take over. Mr. Blackburn said he sold his shares before regulators took action. In a separate matter, he acknowledged in court papers that he was involved in a business in which an investor claimed he was defrauded of $1 million. Mr. Blackburn recently said he had done nothing wrong.

Mr. Blackburn’s track record aside, Mr. Trump agreed to help him start Titan Atlas. The company, in North Charleston, S.C., made panels for prefabricated houses. It quickly failed and Mr. Trump’s father had to bail him out by taking over a $3.65 million bank loan. Mr. Trump was also Mr. Blackburn’s partner in another venture, an effort to redevelop a former naval hospital in North Charleston into an office complex. That business recently filed for bankruptcy, and the project is the subject of litigation.

In 2010 and 2011, he and Mr. Trump traveled together to Mexico and Colombia, looking for projects to develop. Around that time, Mr. Blackburn also came up with an idea for a liquor business called  JB Spirits and went to China to promote it. The project never got off the ground. Mr. Blackburn filed for personal bankruptcy in 2013.

Mr. Trump has not been able to shake his involvement in Titan Atlas. Recently, regulators in South Carolina refused a request by the Trump Organization to reduce its potential environmental liabilities at the company’s former factory site.

Mr. Blackburn’s current profile on LinkedIn lists him as being “out on a medical leave.” He said in an interview last year that he considered Mr. Trump a friend who was a passive investor in Titan Atlas.

Ms. Yun is the head of a little-known investment bank in New York, Yun Capital. She was once a principal in a firm called Global Media Fund, which received stakes in “penny stock” companies — speculative ventures whose shares may be worth a few cents — in exchange for providing them with promotional services. She now spends much of her time in China, according to court papers.

It is not clear when or how she first met Mr. Trump. But around 2008, she took part in a meeting held by Mr. Trump that included discussion of a plan to develop a Trump hotel and condominium complex in Charlotte, N.C. The project never went forward.

In 2010, she filed a trademark for the name of Titan Atlas Manufacturing, the Charleston-area company started by Mr. Trump and Mr. Blackburn. She was also involved in trying to arrange financing for the business, Mr. Blackburn said.

Ms. Yun also formed a separate company with Mr. Blackburn, who said in court papers that he resided for a time in Ms. Yun’s Manhattan apartment, which was in a Trump building. The company, TAM Energy, briefly sold wind turbines out of the Titan Atlas factory.

When Mr. Trump and Mr. Blackburn went to Mexico and Colombia, other representatives of Yun Capital accompanied them. For her part, Ms. Yun asked an architect during that period to draw a rendering for a Trump International Tower and Hotel in Bogotá, Colombia, that is still on the architect’s website.

Court filings show that Ms. Yun faces some $100,000 in unpaid tax liens. She also states on her website that she graduated from the University of Tennessee with honors and is a member of Mensa, the organization for people who score high on IQ tests. However, a spokeswoman for the university said it had no record of honors awarded to Ms. Yun with her degree, and a spokesman for Mensa said there was no record of her being a member.

Ms. Yun, 41, did not respond to repeated requests for comment.

Last year, when Donald J. Trump was running for president, Ms. Yun told a reporter for The Miami Herald that she was seeking to raise funding for the Trump-related project in Bogotá and she testified last summer in a court proceeding that she worked for the “Trump Group.”

A lawyer for the Trump Organization, however, said that neither Donald Trump Jr. nor the company had ever been involved in any “transactions” with Ms. Yun and had no plans to build a property in Bogotá.

Mr. Benedetti, who describes himself as a financier, traveled with Donald Trump Jr. during his 2011 trip to Colombia as Yun Capital’s representative. While there, Mr. Benedetti accompanied Mr. Trump and Mr. Blackburn to a meeting with the country’s president, Juan Manuel Santos, as well as Mr. Benedetti’s brother, Armando, a Colombian senator.

His connection to the Trump family does not appear to extend further than that trip. Mr. Benedetti, 46, said in a recent interview that the last time he had any contact with Mr. Trump was in 2012.

Mr. Benedetti’s name also appears in the so-called Panama Papers, records taken from a Panamanian law firm, Mossack Fonseca, that specialized in setting up shell companies that wealthy individuals could use to shield assets or minimize taxes. According to a newspaper account, Mr. Benedetti used the law firm to set up a “virtual office” that made his company look like a brick-and-mortar one.

Mr. Benedetti, whose full name is Ernesto Camilo Benedetti, now lives in Miami. He said in the interview that he was involved in buying and selling real estate properties. His Twitter feed is a mix of news stories about President Trump and occasional images of scantily clad women. He also has a Spanish-language website, CamiloBenedettiFinancial, that contains his observations about the news.

The site’s home page bears a quotation, which he attributes to himself. Translated into English, it states: “The one who knows how to wait is king.”