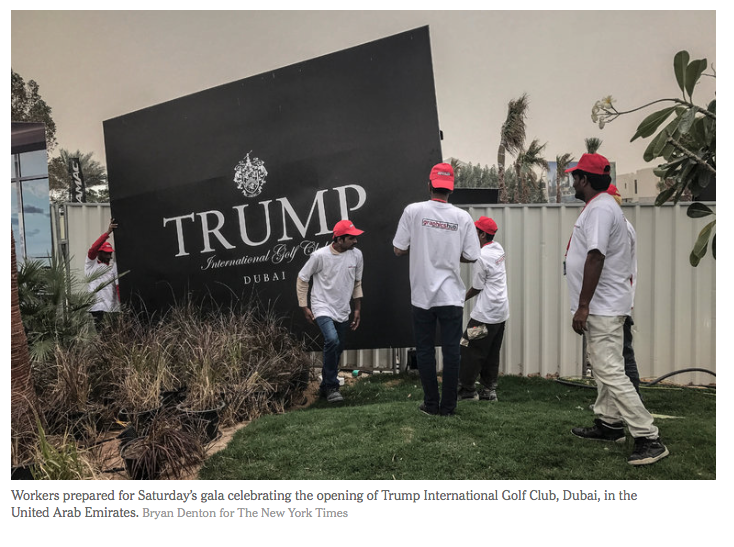 At the Saturday night opening of the clubhouse of the Trump International Golf Club, Dubai, guests munched on mini chicken burgers and sipped fizzy lemonade while Eric Trump and Donald Trump Jr., the president’s adult sons, lauded the ruler of Dubai and their business partner, Hussain Sajwani.

Mr. Sajwani, a billionaire businessman who, like Mr. Trump, built his wealth through real estate, told the crowd that working with the Trumps “was and continues to be a pleasure.”

On the other side of the world, in Vancouver, British Columbia, preparations continued for another ribbon-cutting, on Feb. 28, at a new Trump hotel and condo project there, funded by the Malaysian tycoon Tiah Thee Kian and his son, Tiah Joo Kim.

The two projects, the first to open since Mr. Trump became president, are among the dozen international business deals from his former life still moving forward — from India to Indonesia, Uruguay to the Dominican Republic. None of them are “new deals,” as defined by the family, as they were already well underway before the election.

A Web of Complications

Mr. Sajwani and Mr. Tiah share traits common among Mr. Trump’s partners around the world, including in Indonesia and the Philippines. They are brash, wealthy developers whose families have personal ties to Mr. Trump or to his children.

But the projects in which the two men are involved highlight the complications created when the president of the United States also owns a global real estate company.

Condominium units in the Vancouver building, the Trump International Hotel & Tower, have been purchased by affluent buyers, including a family that runs a Hong Kong machinery company majority-owned by a Chinese state-owned enterprise, according to real estate and corporate records. The Trump Organization is managing only the hotel, in exchange for a fee.

And Mr. Sajwani has contracted extensively with the United States military and spoken of entering the American real estate market — moves that could be easier with a friend in the White House.

Eric Trump, who with his older brother helps run the Trump Organization now that their father is president, said before the Dubai event that the company was not the owner of either development, but only collected a small share of the revenues, and that it did not control who bought the units in Vancouver or the membership list at the golf course in Dubai.

“It is not every day that you have a partner that is also a great friend,” he said. “Hussain, thank you so much for your love, your friendship.”

Donald Trump Jr. praised Sheikh Mohammed bin Rashid al-Maktoum, the ruler of Dubai, saying it was his vision for the country that allowed such projects to succeed.

“It’s a great example of what can be built here and what will continue to be built in the years to come,” he said. 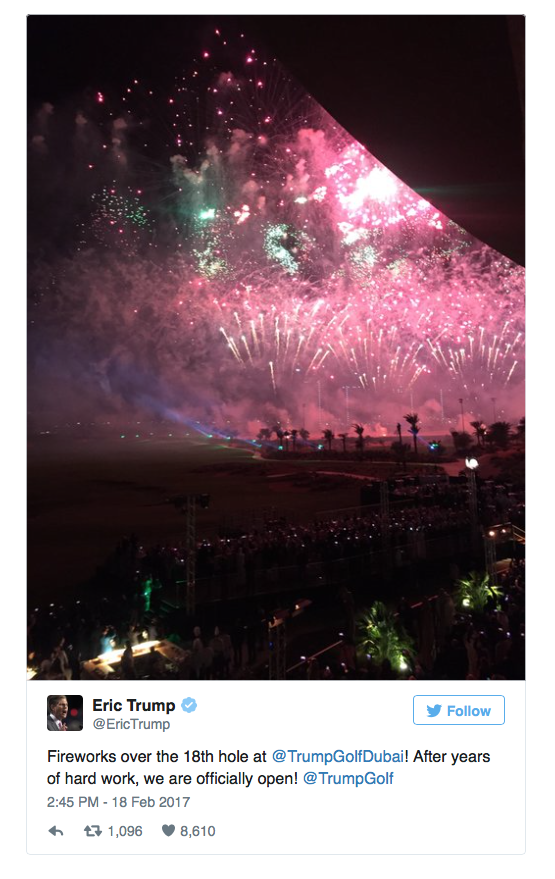 But actions by the elder Mr. Trump, since he began his presidential campaign and now that he is in the White House, have repercussions for his projects. Some in the Emirates worry about Mr. Trump’s stance toward Muslims. And Vancouver’s mayor called in December 2015 for the Trump name to be removed from the property there, given Mr. Trump’s statements about instituting a “total and complete shutdown of Muslims entering the United States.” 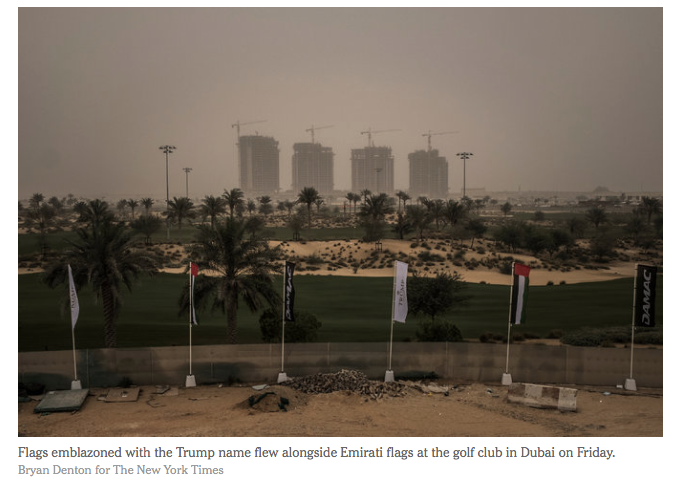 Donald Trump’s hateful positions and commentary remind us all of much darker times in our world’s past — and it is incumbent upon all of us to forcefully challenge hatred in all of the ways that it confronts us,” Mayor Gregor Robertson wrote in a letter to the developer, citing thousands who had signed a petition to have Mr. Trump’s name removed. “It is their belief, and my belief, that Trump’s name and brand have no more place on Vancouver’s skyline than his ignorant ideas have in the modern world.”

Golf Course in the Desert

A few years ago, Mr. Trump, then a real estate tycoon, visited what would turn out to be his first project to open after he became president and his first in the Arab world.

The Trump International Golf Club Dubai was to form the centerpiece of a luxurious collection of upscale homes, and Mr. Trump wanted to check the details.

“We walked through the golf course and he said: ‘You see that tree; move it 10 feet there. That tree is too small; make it bigger,’” recalled Niall McLoughlin, a senior vice president at Damac Properties, which owns the project. “His attention to detail is tremendous.”

The Trump Organization had been brought in to operate the golf course by Damac, whose chairman, Mr. Sajwani, had known Mr. Trump for years.

Like Mr. Trump, Mr. Sajwani rose to billionaire status largely through flashy real estate projects. The son of a shopkeeper, he graduated from the University of Washington, then returned to the United Arab Emirates to found a catering company that provided meals to businesses.

He soon found a bigger client: the United States government.

During the first Persian Gulf war, in 1991, his company provided meals to American soldiers, and it has held similar contracts elsewhere in the Persian Gulf and in Somalia and Bosnia since then.

But his wealth really took off when he focused on real estate in the early 2000s, as an economic boom in Dubai created a growing class of professionals looking for fancy homes. Mr. Sajwani has made his name with splashy promotions, sometimes offering free cars, including Mini Coopers and Lamborghinis, to home buyers.

Last year, Forbes called him “The Donald of Dubai,” putting his net worth at $3.2 billion.

Mr. Sajwani now has projects around the Arab world and has expressed interest in investing in the United States.

He has also maintained his relationship with Mr. Trump. Dressed in a traditional Emirati robe, Mr. Sajwani appeared at the opening of the Trump International Hotel in Washington in October, weeks before Mr. Trump was elected.

And at his first news conference as president-elect, Mr. Trump said he had turned down an offer from Damac for a new $2 billion deal in Dubai.

Questions swirled about the commitment of Mr. Sajwani, a Muslim in a predominately Muslim country, to the Trump brand in 2015, after Mr. Trump said that if elected, he would impose a ban on Muslims entering the United States.

A few days later, billboards near the course in Dubai showing Mr. Trump swinging a golf club and his daughter Ivanka holding a handbag were temporarily taken down, as was Mr. Trump’s name, spelled out in gold letters on a wall near the entrance. 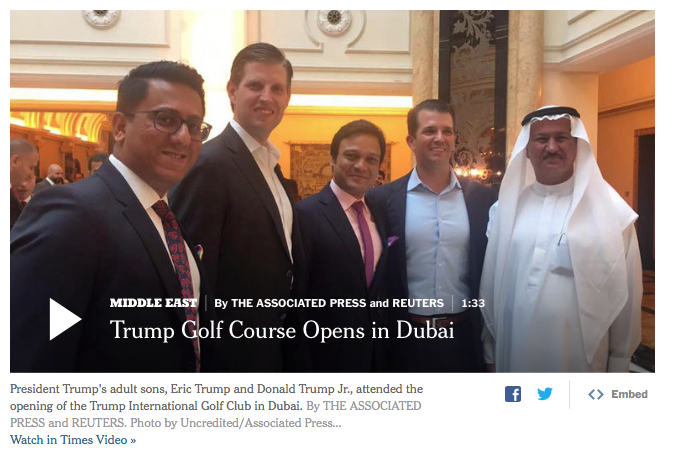 Mr. McLoughlin, of Damac, said in an interview in November that the changes had been routine and unrelated to Mr. Trump’s statements.

“It was a purely unfortunate coincidence,” he said. “We are an apolitical organization.”

There was no overt mention of Mr. Trump at the clubhouse opening on Saturday, but his name was omnipresent, on flags flying around the golf course and on hats, shirts, visors and balls for sale in the pro shop.

No alcohol was served at the opening, though it will be available at the clubhouse.

Members will pay $36,000 a year, plus a $10,000 sign-up fee, said Mr. McLoughlin, who declined to say how many people had joined so far or who they were. But he suggested that the election had elevated Mr. Trump’s name.

A Tower in Vancouver

Later this month, Mr. Trump’s sons are scheduled to preside over another grand opening, this time of the Trump International Hotel & Tower Vancouver, which was developed by the Holborn Group, run by Tiah Joo Kim, 37.

Mr. Tiah formed the partnership with the Trump family and spearheaded the development of the residence and hotel, his first major project, by making a pitch first to Donald Jr., Eric and Ivanka. Their father eventually signed off on the deal.

Mr. Tiah’s father, Tiah Thee Kian, made his fortune in the Malaysian stock market in the 1980s. But in the late 1990s, he was accused of violating securities law and eventually paid a fine of about $900,000. At the time, he was said to be a supporter of Anwar Ibrahim, then the deputy prime minister, who had challenged the leadership of Mahathir Mohamad, the prime minister. Mr. Anwar was later imprisoned on sodomy charges, a case widely seen as politically motivated.

In a country that runs on political patronage, one where many decisions are made behind the scenes, the elder Mr. Tiah’s political alliance with Mr. Anwar may have contributed to his legal setbacks. Political analysts and insiders say he has not been involved in politics since that time and has kept a low profile.

The company’s most profitable venture now is the Trump development in Vancouver, the younger Mr. Tiah said, adding that he assiduously avoided any political entanglements. When he reached an agreement with Mr. Trump in 2012, he never foresaw that Mr. Trump would have a political career.

The Vancouver project includes 217 residential units. All were sold before the election except for the three penthouses, which have not been put on the market. No buyer has sought to back out, Mr. Tiah said.

Two units belong to the Fong family, which paid more than $4.2 million for them. Public records link the units to Sou Lam Fong, founder of CHTC Fong’s Industries Company Ltd., a textile-dyeing machinery company based in Hong Kong. The company is majority-owned by a Chinese state-owned enterprise, China Hi-Tech Group Corporation, according to a recent annual report.

“The Trump name represents quality,” said Bill Streeper, the mayor of the Northern Rockies municipality in British Columbia and a major real estate developer, who bought a unit in the tower on the 55th floor in 2013, long before Mr. Trump won the Republican nomination.

Mr. Trump’s election victory has brought a great deal of attention, good and bad, to the hotel, the younger Mr. Tiah said. There have been a number of anti-Trump protests, but the hotel has also received plenty of free publicity.

On a recent visit to the hotel’s champagne bar, Brittany Dacosta, 26, was having a drink with her sister. She said it was her second time at Trump Vancouver in the past week. “This place is very controversial, so it kind of made us want to come here more,” she said. “I know it sounds bad, but Trump is glamorous.”

Mr. Tiah said he tried to steer a middle course and encourage tolerance.

“The American people have chosen,” he said, “so let’s respect their decision and give him a chance.”