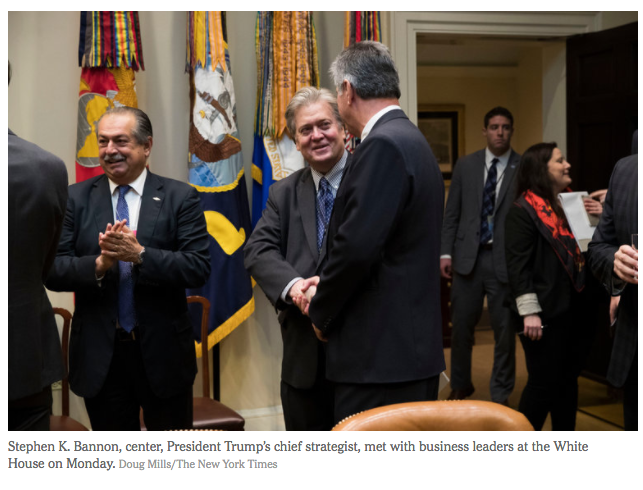 WASHINGTON — Stephen K. Bannon, President Trump’s chief White House strategist, laced into the American press during an interview on Wednesday evening, arguing that news organizations had been “humiliated” by an election outcome few anticipated, and repeatedly describing the media as “the opposition party” of the current administration.

“The media should be embarrassed and humiliated and keep its mouth shut and just listen for awhile,” Mr. Bannon said during a telephone call.

“I want you to quote this,” Mr. Bannon added. “The media here is the opposition party. They don’t understand this country. They still do not understand why Donald Trump is the president of the United States.”

The scathing assessment — delivered by one of Mr. Trump’s most trusted and influential advisers, in the first days of his presidency — comes at a moment of high tension between the news media and the administration, with skirmishes over the size of Mr. Trump’s inaugural crowd and the president’s false claims that millions of illegal votes by undocumented immigrants swayed the popular vote against him.

Mr. Bannon, who rarely grants interviews to journalists outside of Breitbart News, the provocative right-wing website he ran until last August, was echoing comments by Mr. Trump this weekend, when the president said he was in “a running war” with the media and called journalists “among the most dishonest people on earth.”

During a call to discuss Sean M. Spicer, the president’s press secretary, Mr. Bannon ratcheted up the criticism, offering a broad indictment of the news media as biased against Mr. Trump and out of touch with the American public. That’s an argument familiar to readers of Breitbart and followers of Trump-friendly personalities like Sean Hannity.

“The elite media got it dead wrong, 100 percent dead wrong,” Mr. Bannon said of the election, calling it “a humiliating defeat that they will never wash away, that will always be there.”

“The mainstream media has not fired or terminated anyone associated with following our campaign,” Mr. Bannon said. “Look at the Twitter feeds of those people: they were outright activists of the Clinton campaign.” (He did not name specific reporters or editors.)

“That’s why you have no power,” Mr. Bannon added. “You were humiliated.”

Of all of Mr. Trump’s advisers in the White House, Mr. Bannon is the one tasked with implementing the nationalist vision that Mr. Trump channeled during the later months of the campaign, one that stemmed from Mr. Bannon himself. And in many ways Mr. Trump’s first week has put into action that vision — from the description of “American carnage’’ Mr. Trump laid out in his inauguration speech, to a series of executive actions outlining policy on trade agreements, immigration, the building of a border wall and the demands that Mexico pay for it.

He is one of the strongest forces in a White House with competing power centers. A savvy manipulator of the press, and a proud provocateur, Mr. Bannon was among the few advisers in Mr. Trump’s circle who was said to have urged on Mr. Spicer’s confrontational, emotional statement to a shocked White House briefing room on Saturday, when the White House disputed press reports on the inauguration crowd size. He mostly shares Mr. Trump’s view that the news media has misunderstood the movement that the president rode into office.

On the telephone, Mr. Bannon spoke in blunt but calm tones, peppered with a dose of profanities, and humorously referred to himself at one point as “Darth Vader.” He said, with ironic relish, that Mr. Trump was elected by a surge of support from “the working class hobbits and deplorables.”

The conversation was initiated by Mr. Bannon to offer praise for Mr. Spicer, who has been criticized this week for making false claims at the White House podium about the attendance of Mr. Trump’s inaugural crowd, for calling reporters dishonest and lecturing them about what stories to write and for failing to disavow Mr. Trump’s lie about widespread voter fraud in the election.

Asked if he was concerned that Mr. Spicer had lost credibility with the news media, Mr. Bannon chortled. “Are you kidding me?” he said. “We think that’s a badge of honor. ‘Questioning his integrity’ — are you kidding me? The media has zero integrity, zero intelligence, and no hard work.”

Mr. Bannon mostly referred to the “elite” or “mainstream” media, but he cited The New York Times and The Washington Post by name.

“The paper of record for our beloved republic, The New York Times, should be absolutely ashamed and humiliated,” Mr. Bannon said. “They got it 100 percent wrong.”

He added that he has been a reader of The Times for most of his adult life.