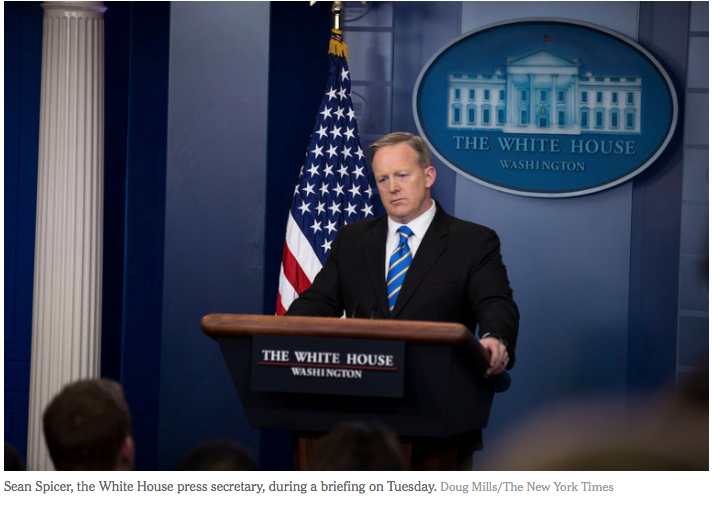 WASHINGTON — During a private meeting with congressional leaders on Monday, President Trump asserted that between three million and five million unauthorized immigrants had voted for his Democratic opponent and robbed him of a victory in the national popular vote.

There is no evidence to support the claim, which has been discredited repeatedly by numerous fact-checkers.

That did not stop Sean Spicer, the White House press secretary, from standing by the president’s words on Tuesday during a briefing with reporters at the White House. “As I said, I think the president has believed that for a while based on studies and information he has,” Mr. Spicer said.

That much appears to be true. Mr. Trump repeatedly raised doubts about the integrity of the American voting system in the period before the election in November and has falsely said since his victory that millions of people voted illegally.

Pressed to present the evidence on Tuesday, Mr. Spicer appeared to conflate two different studies that Mr. Trump’s staff had previously cited in defending his claim. “There’s one that came out of Pew in 2008 that showed 14 percent of people who voted were noncitizens,” Mr. Spicer said. “There’s other studies that have been presented to him.”

Here are the facts

The first study was conducted in 2014 by professors at Old Dominion University and discussed on Monkey Cage, a blog hosted by The Washington Post. Using data from the Cooperative Congressional Election Study, the researchers found that 14 percent of noncitizens who responded to the survey in 2008 and 2010 said they were registered to vote.

The problem is that the study relied on flawed data and was roundly criticized by political scientists who said that a more careful examination of the data revealed no evidence that noncitizens had voted in recent elections.

The second study, conducted in 2012 by the Pew Center on the States, found that 24 million voter registrations were no longer valid or “significantly inaccurate”; that more than 1.8 million dead people were still listed on the voter rolls; and that almost three million were registered in multiple states, probably because they had moved from one state to another.

The study did not find evidence that those errors led to voter fraud, however, simply that they presented avoidable costs and inefficiencies in the electoral process.

The primary author of the study, David Becker, made that plain in a Twitter post in November.

On Tuesday, he wrote on Twitter that voting integrity in the November election had in fact improved. 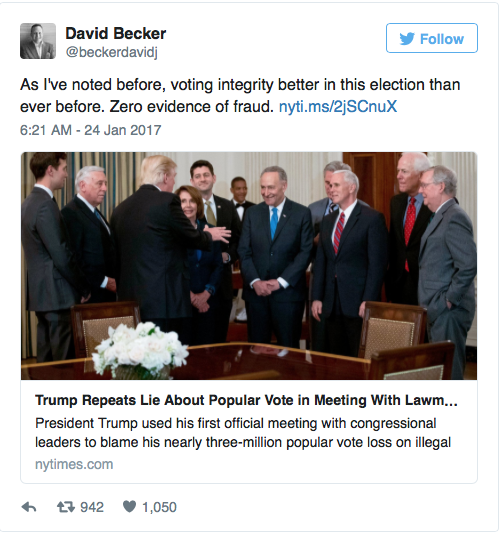 The absence of studies supporting the claim is not all that is working against Mr. Trump. Election and law enforcement officials all over the country, who monitored reports of voter fraud state by state, have said they found no credible evidence of widespread fraud.

The reaction in Congress

“I’ve seen no evidence to that effect,” House Speaker Paul D. Ryan told reporters on Monday when asked about the purported voter fraud.

In an interview with CNN, Senator Lindsey Graham, Republican of South Carolina, urged Mr. Trump to “knock this off.”

“This is going to erode his ability to govern this country if he does not stop it,” Mr. Graham said, adding that the president needed to present evidence for his beliefs if he was going to continue to profess them.

Asked about the accuracy of the president’s assessment, Senator Mitch McConnell of Kentucky, the majority leader, chose to answer a question no one had asked.

“It does occur,” he said of voter fraud, declining to quantify the scope. “There are always arguments on both sides about how much, how frequent and all the rest.”