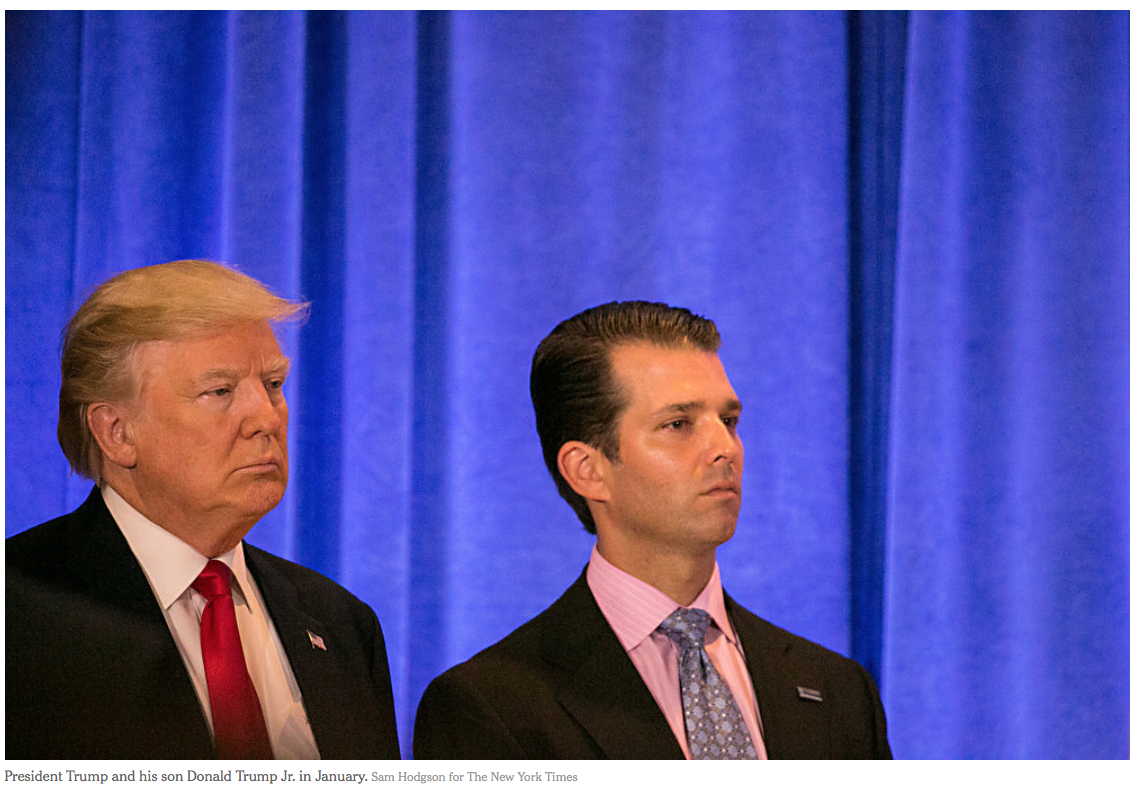 Two weeks after Donald J. Trump clinched the Republican presidential nomination last year, his eldest son arranged a meeting at Trump Tower in Manhattan with a Russian lawyer who has connections to the Kremlin, according to confidential government records described to The New York Times.

The previously unreported meeting was also attended by Mr. Trump’s campaign chairman at the time, Paul J. Manafort, as well as the president’s son-in-law, Jared Kushner, according to interviews and the documents, which were outlined by people familiar with them.

While President Trump has been dogged by revelations of undisclosed meetings between his associates and Russians, this episode at Trump Tower on June 9, 2016, is the first confirmed private meeting between a Russian national and members of Mr. Trump’s inner circle during the campaign. It is also the first time that his son Donald Trump Jr. is known to have been involved in such a meeting.

Representatives of Donald Trump Jr. and Mr. Kushner confirmed the meeting after The Times approached them with information about it. In a statement, Donald Jr. described the meeting as primarily about an adoption program. The statement did not address whether the presidential campaign was discussed.

American intelligence agencies have concluded that Russian hackers and propagandists worked to tip the election toward Mr. Trump, and a special prosecutor and congressional committees are now investigating whether his campaign associates colluded with Russians. Mr. Trump has disputed that, but the investigation has cast a shadow over his administration for months.

Mr. Trump has also equivocated on whether the Russians were solely responsible for the hacking. But in Germany on Friday, meeting President Vladimir V. Putin for the first time as president, Mr. Trump questioned him about the hacking. The Russian leader denied meddling in the election.

The Russian lawyer invited to the Trump Tower meeting, Natalia Veselnitskaya, is best known for mounting a multipronged attack against the Magnitsky Act, an American law that blacklists suspected Russian human rights abusers. The law so enraged Mr. Putin that he retaliated by halting American adoptions of Russian children.

The adoption impasse is a frequently used talking point for opponents of the Magnitsky Act. Ms. Veselnitskaya’s campaign against the law has also included attempts to discredit its namesake, Sergei L. Magnitsky, a lawyer and auditor who died in mysterious circumstances in a Russian prison in 2009 after exposing one of the biggest corruption scandals during Mr. Putin’s rule.

Ms. Veselnitskaya is married to a former deputy transportation minister of the Moscow region, and her clients include state-owned businesses and a senior government official’s son, whose company was under investigation in the United States at the time of the meeting. Her activities and associations had previously drawn the attention of the F.B.I., according to a former senior law enforcement official. 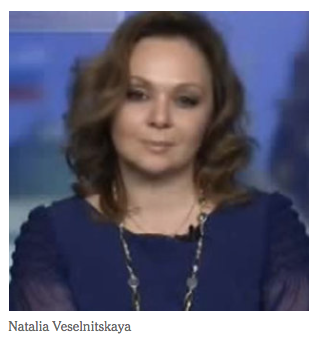 In his statement, Donald Trump Jr. said: “It was a short introductory meeting. I asked Jared and Paul to stop by. We primarily discussed a program about the adoption of Russian children that was active and popular with American families years ago and was since ended by the Russian government, but it was not a campaign issue at the time and there was no follow up.”

He added: “I was asked to attend the meeting by an acquaintance, but was not told the name of the person I would be meeting with beforehand.”

Donald Trump Jr. had denied participating in any campaign-related meetings with Russian nationals when he was interviewed by The Times in March. “Did I meet with people that were Russian? I’m sure, I’m sure I did,” he said. “But none that were set up. None that I can think of at the moment. And certainly none that I was representing the campaign in any way, shape or form.”

Asked at that time whether he had ever discussed government policies related to Russia, the younger Mr. Trump replied, “A hundred percent no.”

The Trump Tower meeting was not disclosed to government officials until recently, when Mr. Kushner, who is also a senior White House aide, filed a revised version of a form required to obtain a security clearance. The Times reported in April that he had failed to disclose any foreign contacts, including meetings with the Russian ambassador to the United States and the head of a Russian state bank. Failure to report such contacts can result in a loss of access to classified information and even, if information is knowingly falsified or concealed, in imprisonment.

Mr. Kushner’s advisers said at the time that the omissions were an error, and that he had immediately notified the F.B.I. that he would be revising the filing. They also said he had met with the Russians in his official transition capacity as a main point of contact for foreign officials.

In a statement on Saturday, Mr. Kushner’s lawyer, Jamie Gorelick, said: “He has since submitted this information, including that during the campaign and transition, he had over 100 calls or meetings with representatives of more than 20 countries, most of which were during transition. Mr. Kushner has submitted additional updates and included, out of an abundance of caution, this meeting with a Russian person, which he briefly attended at the request of his brother-in-law Donald Trump Jr. As Mr. Kushner has consistently stated, he is eager to cooperate and share what he knows.”

Mr. Manafort, the former campaign chairman, also recently disclosed the meeting, and Donald Trump Jr.’s role in organizing it, to congressional investigators who had questions about his foreign contacts, according to people familiar with the events. 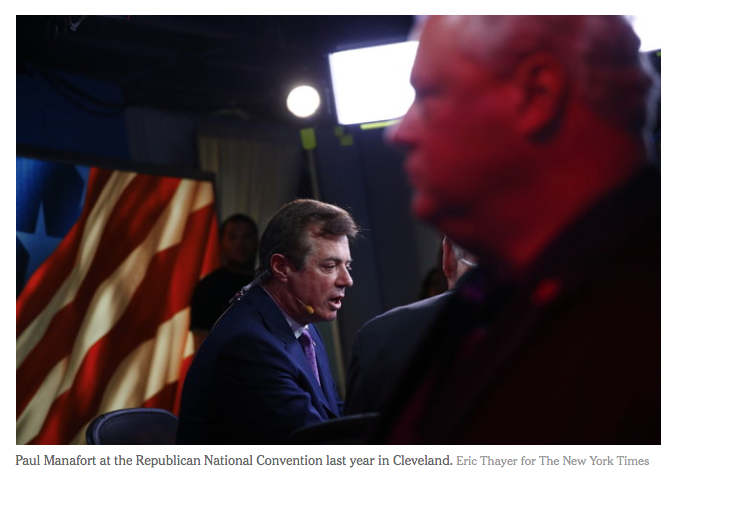 A spokesman for Mr. Manafort declined to comment. Ms. Veselnitskaya did not immediately respond to questions including whether she had discussed the meeting with anyone in the Russian government.

Because Donald Trump Jr. does not serve in the administration and does not have a security clearance, he was not required to disclose his foreign contacts. Federal and congressional investigators have not publicly asked for any records that would require his disclosure of Russian contacts. It is not clear whether the Justice Department was aware of the meeting before Mr. Kushner disclosed it recently. Neither Mr. Kushner nor Mr. Manafort was required to disclose the content of the meeting in their government filings.

During the campaign, Donald Trump Jr. served as a close adviser to his father, frequently appearing at campaign events. Since the president took office, the younger Mr. Trump and his brother, who have worked for the Trump Organization for most of their adult lives, assumed day-to-day control of their father’s real estate empire.

But a quick internet search would have revealed Ms. Veselnitskaya as a formidable operator with a history of pushing the Kremlin’s agenda. Most notable is her campaign against the Magnitsky Act, which provoked a Cold War-style, tit-for-tat row with the Kremlin when President Barack Obama signed it into law in 2012.

Under the law, some 44 Russian citizens have been put on a list that allows the United States to seize their American assets and deny them visas. The United States asserts that many of them are connected to fraud exposed by Mr. Magnitsky, who after being jailed for more than a year was found dead in his cell. A Russian human rights panel found that he had been assaulted. To critics of Mr. Putin, Mr. Magnitsky, in death, became a symbol of corruption and brutality in the Russian state.

An infuriated Mr. Putin has called the law an “outrageous act,” and, in addition to banning American adoptions, compiled what became known as an “anti-Magnitsky” blacklist of United States citizens.

Among those blacklisted was Preet Bharara, then the United States attorney in Manhattan, who led high-profile convictions of Russian arms and drug dealers. Mr. Bharara was abruptly fired in March, after previously being asked to stay on by Mr. Trump.

One of Ms. Veselnitskaya’s clients is Denis Katsyv, the Russian owner of a Cyprus-based investment company called Prevezon Holdings. He is the son of Petr Katsyv, the vice president of the state-owned Russian Railways and a former deputy governor of the Moscow region. In a civil forfeiture case prosecuted by Mr. Bharara’s office, the Justice Department alleged that Prevezon had helped launder money tied to a $230 million corruption scheme exposed by Mr. Magnitsky by parking it in New York real estate and bank accounts. As a result, the government froze $14 million of its assets. Prevezon recently settled the case for $6 million without admitting wrongdoing.

Ms. Veselnitskaya and her client hired a team of political and legal operatives that has worked unsuccessfully in Washington to repeal the Magnitsky Act. They also tried but failed to keep Mr. Magnitsky’s name off a new law that takes aim at human-rights abusers across the globe.

Ms. Veselnitskaya was also deeply involved in the making of an anti-Magnitsky film that premiered just weeks before the Trump Tower meeting. Titled “The Magnitsky Act — Behind the Scenes,” the film echoes the Kremlin line that the widely accepted version of Mr. Magnitsky’s life and death is wrong. The film claims that he was not assaulted and alleges that he never testified that government officials conspired to steal $230 million in fraudulent tax rebates.

In the film’s telling, the true culprit of the fraud was William F. Browder, an American-born financier who hired Mr. Magnitsky to investigate the fraud after he had three of his investment funds companies in Russia seized. On RussiaTV5, a station whose owners are known to be close to Mr. Putin, Ms. Veselnitskaya was lauded as “one of those who gave the film crew the real proofs and records of testimony.”

Mr. Browder, who stopped the screening of the film in Europe by threatening libel suits, called the film a state-sponsored smear campaign.

“She’s not just some private lawyer,” Mr. Browder said of Ms. Veselnitskaya. “She is a tool of the Russian government.”

John O. Brennan, the former C.I.A. director, testified in May that he had been concerned last year by Russian government efforts to contact and manipulate members of Mr. Trump’s campaign. “Russian intelligence agencies do not hesitate at all to use private companies and Russian persons who are unaffiliated with the Russian government to support their objectives,” he said.

The F.B.I. began a counterintelligence investigation last July into Russian contacts with any Trump associates. Agents focused on Mr. Manafort and a pair of advisers, Carter Page and Roger J. Stone.

Among those now under investigation is Michael T. Flynn, who was forced to resign as Mr. Trump’s national security adviser after it became known that he had falsely denied speaking to the Russian ambassador about sanctions imposed by the Obama administration over the election hacking.

Congress later discovered that Mr. Flynn had been paid more than $65,000 by companies linked to Russia, and that he had failed to disclose those payments when he renewed his security clearance and underwent an additional background check to join the White House staff.

In May, the president fired the F.B.I. director, James B. Comey, who days later provided information about a meeting with Mr. Trump at the White House. According to Mr. Comey, the president asked him to end the bureau’s investigation into Mr. Flynn; Mr. Trump has repeatedly denied making such a request. Robert S. Mueller III, a former F.B.I. director, was then appointed as special counsel.

The status of Mr. Mueller’s investigation is not clear, but he has assembled a veteran team of prosecutors and agents to dig into any possible collusion.