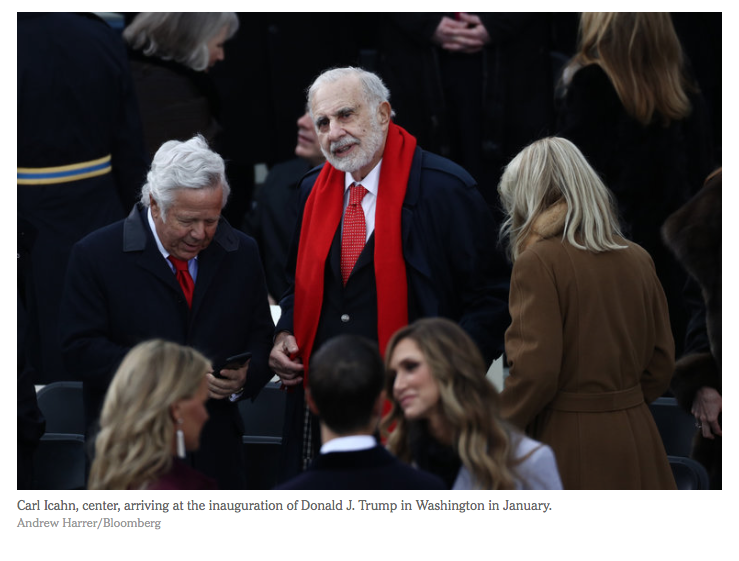 WASHINGTON — Since Carl Icahn, the billionaire investor, was named by President Trump as a special adviser on regulatory matters, he has been busy working behind the scenes to try to revamp an obscure Environmental Protection Agency rule that governs the way corn-based ethanol is mixed into gasoline nationwide.

CLICK IMAGE ABOVE for direct link to NYT story

It is a campaign that fits into the charge Mr. Trump gave Mr. Icahn, to help the nation “break free of excessive regulation.” But there is an additional detail that is raising eyebrows in Washington: Mr. Icahn is a majority investor in CVR Energy, an oil refiner based in Sugar Land, Tex., that would have saved $205.9 million last year had the regulatory fix he is pushing been in place.

Mr. Icahn, known internationally for his pugnacious and persistent approach to activist investing, has brought that same technique to his new role. He quizzed Scott Pruitt, a former Oklahoma attorney general, about the ethanol rule when Mr. Icahn helped interview Mr. Pruitt for the E.P.A. job. Mr. Icahn later reached out to Gary D. Cohn, Mr. Trump’s top economic adviser, to raise the issue. Mr. Icahn said he even had a telephone conversation in February with Mr. Trump himself.

The blitz has already generated at least one clear outcome: Since Mr. Trump was elected president with Mr. Icahn’s very vocal support and nearly $200,000 in political contributions to Republican causes — the stock price of CVR Energy has soared. By late December, it had doubled. It is still up 50 percent from the pre-election level, generating a windfall, at least on paper, of $455 million as of Friday.

The merging of private business interest with government affairs — aspects of which have previously been reported by Bloomberg, but which The New York Times has found further evidence of — has generated protests from ethics experts in Washington, as well as certain Senate Democrats. They consider Mr. Icahn’s dual roles perhaps the most troubling conflict of interest to emerge so far in the new administration.

“This is a mile out of bounds by any standard,” said Senator Sheldon Whitehouse, Democrat of Rhode Island, who, along with other Democrats, sent a letter Monday to Mr. Icahn, the Office of Government Ethics and the Department of Justice to object to Mr. Icahn’s dual roles, and to ask new questions. “Were the shoe on the other foot, Republicans would be having fits about any Obama relationship like this.”

Mr. Icahn, 81, in a series of interviews in the last week, was unapologetic. He said he was not subject to conflict of interest rules because he is an informal, unpaid adviser to Mr. Trump, not an official government employee.

“I’m not making any policy,” Mr. Icahn said. “I am only giving my opinion.”

Kelly Love, a White House spokeswoman, also dismissed the criticism. She pointed to the December news release when Mr. Trump first named Mr. Icahn “special adviser to the president” on regulatory matters. “He is simply a private citizen whose opinion the president respects and whom the president speaks with from time to time,” Ms. Love said in a written statement. “Mr. Icahn does not have a position with the administration nor a policy-making role.”

Both compared Mr. Icahn’s role to corporate executives serving on federal advisory commissions, who are expected to argue for changes in federal policies while remaining corporate officers. But CVR Energy, of which Mr. Icahn owns 82 percent, is just one entry on a growing list of potential conflicts that have surfaced since his December appointment.

Mr. Icahn has provided input to the White House on the selection of the new head of the Securities and Exchange Commission. He is a major investor in companies that have recently been targeted for enforcement action or investigation by the S.E.C., including CVR Energy and Herbalife, the nutritional beverage company, of which he owned about 24 percent at the end of last year. 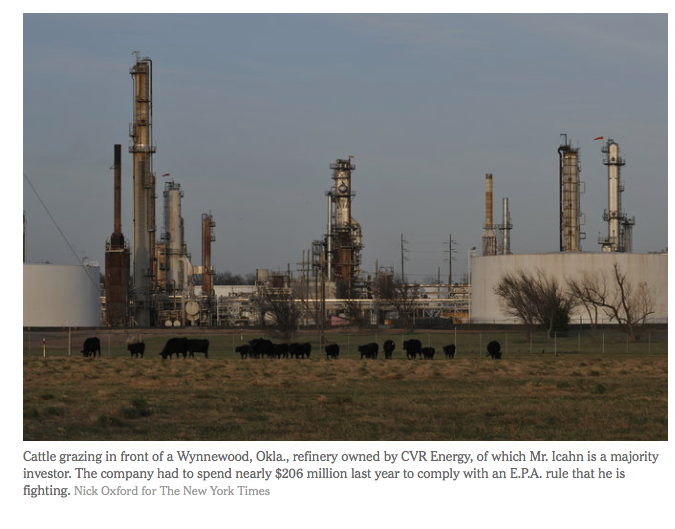 Mr. Icahn has also pressed Freeport-McMoRan, the global mining company he helps run as a result of his large investment, to more aggressively fight back against the government of Indonesia, the company’s chief executive, Richard Adkerson, said in an interview Friday. Indonesia is challenging Freeport’s contract to extract gold and copper from one of the world’s largest mines.

The company, as that pressure from Mr. Icahn and other investors has intensified, has been asking for help from the State Department, Commerce Department and White House, Mr. Adkerson said.

Mr. Icahn is “very concerned about what is happening in Indonesia,” Mr. Adkerson told reporters in Indonesia last month, adding that he was “confident the U.S. government will want to see Freeport treated fairly.” (Both Mr. Adkerson and Mr. Icahn said that Mr. Icahn, who controls two of eight seats on the company’s board, had not directly intervened with the Trump administration on this matter.)

And while the Trump administration imposed a broad freeze on the adoption of new regulations — holding up dozens of new rules affecting everything from hybrid cars to furniture manufacturing — it surprised industry officials by allowing one Internal Revenue Service rule to go into effect in late January. The rule expands a special kind of oil and gas business organization with tax advantages, known as a master limited partnership, that Mr. Icahn cited as a primary reason he first made his big investment in CVR Energy back in 2012.

What is clear is that Mr. Icahn has an unusual position in the Trump administration. During his campaign, Mr. Trump repeatedly boasted of his ties to Mr. Icahn — calling him “my very dear friend” and citing Mr. Icahn’s support as a sign that “many of the great businesspeople are endorsing me.”

His fortune, $16.6 billion, according to a Forbes estimate, is greater than those of all the other members of Mr. Trump’s cabinet combined, with investments in companies as diverse as Hertz, Xerox and PayPal, as well as A.I.G., the multinational insurance company, and most recently Bristol-Myers Squibb, the global biopharmaceutical company.

Mr. Trump’s cabinet appointees, many of whom are very rich, had to undergo stringent reviews by the Office of Government Ethics that negotiated personalized asset sales agreements for each of them to help them avoid conflicts of interest. But Mr. Icahn is not required to take any such steps, given that he is an unpaid adviser rather than a formal government employee.

Mr. Icahn has long fought against the ethanol rule, known more formally as the Renewable Fuel Standard. In August he wrote an unusually personal 11-page letter to Gina McCarthy, who served as President Barack Obama’s head of the Environmental Protection Agency, and one of Ms. McCarthy’s top deputies, with an all-capital-letter headline: “PROGRAM IS BROKEN AND NEEDS TO BE FIXED IMMEDIATELY.”

He pushed the federal government, in this letter and other appeals, to eliminate the requirement that refiners be held responsible for ensuring that ethanol is blended into gasoline, given that the actual blending is often done by gas station owners, closer to the point of sale. Other merchant refiners like the San Antonio-based Valero Energy joined Mr. Icahn in pressing the E.P.A.

“This is a terrible, flawed rule,” said LeAnn Johnson Koch, a lawyer representing a group of smaller refiners, who joined the effort.

Major oil companies, like Exxon Mobil, own both the refineries and service stations, so they can handle this requirement. But CVR Energy and other so-called merchant refiners no longer handle the gasoline once it leaves their refineries. So they must buy renewable fuel credits — nicknamed RINs — to prove to the E.P.A. that they have complied with the blending of the ethanol and gasoline, a requirement that cost CVR $637.5 million over the last four years.

“You are robbing refineries so that gas station owners and other players can make windfall profits,” Mr. Icahn said in an interview Friday, barely able to contain his anger at the arrangement.

But the Obama administration, in November, moved to reject the request to revamp the system.

“We were not persuaded that the program would be appreciably better at accomplishing its goals, with the approach that he was advocating,” said Janet McCabe, the E.P.A. administrator who oversaw the program.

So after Mr. Trump won, Mr. Icahn took up the campaign again, this time gaining much higher access. First, Mr. Trump asked Mr. Icahn to help him screen candidates for the E.P.A. job, so when Mr. Icahn interviewed Mr. Pruitt, he asked him specifically about his position on the ethanol rule.

“The E.P.A., in my opinion, has gone way too far, has sort of run amok with these crazy regulations,” Mr. Icahn said in an interview with Bloomberg television in early December, explaining why he supported Mr. Pruitt for the job. Mr. Icahn then added that Mr. Pruitt had made clear to him that “he feels pretty strongly about the absurdity of these obligations, and I feel that this should be done immediately,” referring to the ethanol rule.

In February, Mr. Icahn set up a telephone call with Mr. Trump. The conversation, which took place in the lobby of Mr. Icahn’s New York apartment building as he was returning from walking his dog, involved a plan he had hatched to force the E.P.A. to revamp the rule, details of which were confirmed by Mr. Icahn, after being first reported by Bloomberg.

But Mr. Icahn’s plan has run into intense opposition from other industry players, including the powerful American Petroleum Institute, and a trade association that represents major ethanol producers like Iowa-based Poet. In an interview last week, Poet’s chief executive, Jeff Broin, called the plan a “back-room” deal. “It seems like self-dealing to me and a clear conflict of interest,” he said.

The White House, in a statement, said no policy change was imminent.

But Mr. Icahn’s actions have already generated calls for investigations, including a complaint filed this month with congressional officials by Public Citizen, a liberal nonprofit group.

Not uncharacteristically for Mr. Icahn, he shows no sign that he intends to back down in his push for the policy change.

“All my life I have fought the establishment — from U.S. Steel, to eBay, to Apple,” he said last week, listing some of his famous battles to force management changes at companies in which he has invested. “I have never shied away from it. I am not going to now.”