NYT: Frustration and Finger-Pointing as G.O.P. Pulls Out of Deal To Bar Hacked Materials

By Peter Lance on September 8, 2018Comments Off on NYT: Frustration and Finger-Pointing as G.O.P. Pulls Out of Deal To Bar Hacked Materials

WASHINGTON — House Republicans withdrew on Thursday from negotiations with Democrats over a pact that would have effectively barred both parties from using hacked or stolen material on the campaign trail this fall.

Leaders of the National Republican Congressional Committee, the campaign arm of House Republicans, and their counterparts at the Democratic Congressional Campaign Committee had labored for much of the summer over rules that would have governed the way the congressionally run committees and their candidates treated material like the thousands of pages of damaging Democratic documents stolen and leaked by Russian hackers in 2016.

Instead, the two parties were left on Thursday exchanging shots just two months before Election Day; Republicans claimed that Democrats had negotiated in bad faith and violated an agreement not to speak about the negotiations publicly, and Democrats said that Republicans were merely searching for an excuse to pull out. It only fed the complaint by Democrats that Republican lawmakers have resisted bridging partisan divisions in the two years since Russia began its brazen attack on the American political system.

“Negotiations are about trust. Once that trust is breached, there is simply no way to reach an agreement,” said Matt Gorman, a spokesman for the Republican committee. “We don’t need a pledge to do what we planned to do already. And we’re certainly not going to be a pawn in someone’s publicity stunt.”

SIX WAYS TO FIGHT ELECTION HACKING + VOTER FRAUD, ACCORDING TO AN EXPERT PANEL 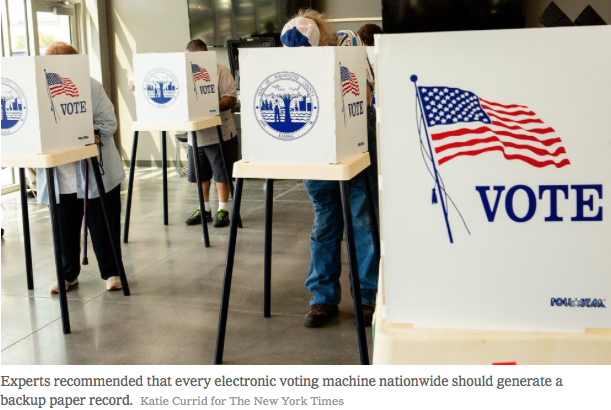 Democrats strongly rebutted that claim, accusing Republicans of slow-walking negotiations before pulling the plug based on a benign press interview.

“We have been clear from Day 1 that the D.C.C.C. will not use stolen hacked materials for political gain, and have been negotiating in good faith for three months to get the N.R.C.C. on the same page,” said Representative Ben Ray Luján of New Mexico, the chairman of the Democratic committee. “The N.R.C.C. has needlessly delayed and made one excuse after another, and I’m incredibly disappointed that they have backed out of this commitment not to use stolen hacked materials. This is a sad day for our democracy.”

The two sides had been close to reaching an agreement as recently as the past week or so, according to officials involved in the negotiations who spoke on the condition of anonymity to candidly discuss the talks. But a key difference of opinion remained over how to deal with hacked or stolen material that entered the public domain through news or other sources. Republicans argued that such material had to be fair game and that to ask candidates not to seize on news reports was unnecessarily prohibitive. Democrats countered that any agreement would be toothless without such a provision.

As recently as Tuesday evening, Democrats proposed a draft of the agreement that would have required the two committees to pledge that they would not “use known stolen or hacked information, or promote or disseminate hacked materials to the press, regardless of the source,” according to an official familiar with the latest version.

The draft’s other provisions included a pledge not to aid hacking efforts, not to seek out hacked or stolen materials, and to report any contacts with foreign actors to law enforcement authorities. The Democratic committee and its candidates plan to honor the draft’s provisions.

But Republicans felt that Democrats had repeatedly tried to jam them into a premature agreement and ultimately that Mr. Luján violated the terms of the negotiations when he told The Wall Street Journal on Tuesday that the two parties hoped to announce final terms this week. (Representative Steve Stivers of Ohio, the Republican committee chairman, had publicly acknowledged the negotiations at an event in June.)

Without a deal, the parties will be left to more or less set their own standards, as they have in past election cycles. Outside political advocacy groups, which are expected to spend tens of millions of dollars on House races this fall, would not have been subject to the pledge.

The issue is hardly hypothetical. In addition to the more publicized intrusions into the Democratic National Committee, Russian actors in 2016 hacked into the Democratic Congressional Campaign Committee serversand eventually shared thousands of pages of stolen information on candidates in nearly a dozen House races with bloggers and reporters. Their efforts appeared to target competitive races in states including Florida, Pennsylvania, New Hampshire, Ohio, Illinois, New Mexico and North Carolina.

News outlets widely reported on the hacked campaign material, amplifying the impact of the Russian intrusion, in the run-up to the 2016 election. And after a Republican political advertisement aired that appeared to use hacked materials, Mr. Luján wrote a letter that August warning the Republican congressional committee that it would be complicit in Russia’s influence campaign if it continued to use hacked or stolen material.

American intelligence officials and technology titans like Facebook and Microsoft said they have seen evidence that Russia continues to actively interfere in the American political process. But there has not been evidence made public to suggest that Russia or any other state actor has penetrated the networks of candidates or either campaign committee.

NYT: Frustration and Finger-Pointing as G.O.P. Pulls Out of Deal To Bar Hacked Materials added by Peter Lance on September 8, 2018
View all posts by Peter Lance →