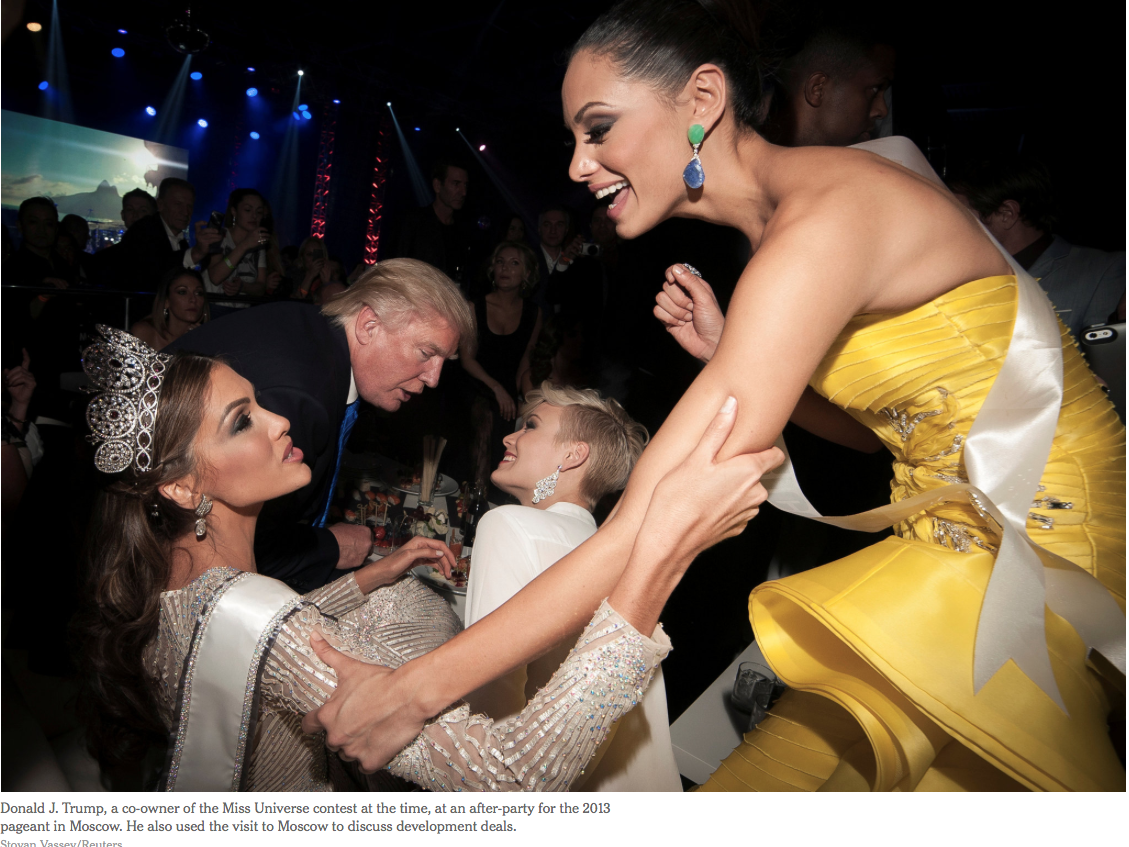 It was 2005, and Felix Sater, a Russian immigrant, was back in Moscow pursuing an ambitious plan to build a Trump tower on the site of an old pencil factory along the Moscow River that would offer hotel rooms, condominiums and commercial office space.

Letters of intent had been signed and square footage was being analyzed. “There was an opportunity to explore building Trump towers internationally,” said Mr. Sater, who worked for a New York-based development company that was a partner with Donald J. Trump on a variety of deals during that decade. “And Russia was one of those countries.”

The president-elect’s favorable comments about President Vladimir V. Putin of Russia and the conclusion of United States intelligence officials that Moscow acted to help Mr. Trump’s campaign have focused attention on Mr. Trump’s business interests in Russia. Asked about the issue at his news conference last week, Mr. Trump was emphatic on one point: “I have no dealings with Russia.” And he repeated, “I have no deals that could happen in Russia because we’ve stayed away.”

The project on the old pencil factory site ultimately fizzled. And by the time Mr. Trump entered the presidential race, he had failed to get any real estate development off the ground in Russia. But it was not for lack of trying.

Mr. Trump repeatedly sought business in Russia as far back as 1987, when he traveled there to explore building a hotel. He applied for his trademark in the country as early as 1996. And his children and associates have appeared in Moscow over and over in search of joint ventures, meeting with developers and government officials.

During a trip in 2006, Mr. Sater and two of Mr. Trump’s children, Donald Jr. and Ivanka, stayed at the historic Hotel National Moscow opposite the Kremlin, connecting with potential partners over the course of several days.

As recently as 2013, Mr. Trump himself was in Moscow. He had sold Russian real estate developers the right to host his Miss Universe pageant that year, and he used the visit as a chance to discuss development deals, writing on Twitter at the time: “TRUMP TOWER-MOSCOW is next.”

As the Russian market opened up in the post-Soviet era, Mr. Trump and his partners pursued Russians who were newly flush with cash to buy apartments in Trump Towers in New York and Florida, sales that he boasted about in a 2014 interview. “I know the Russians better than anybody,” Mr. Trump told Michael D’Antonio, a Trump biographer who shared unpublished interview transcripts with The New York Times.

Seeking deals in Russia became part of a broader strategy to expand the Trump brand worldwide. By the mid-2000s, Mr. Trump was transitioning to mostly licensing his name to hotel, condominium and commercial towers rather than building or investing in real estate himself. He discovered that his name was especially attractive in developing countries where the rising rich aspired to the type of ritzy glamour he personified.

While he nailed down ventures in the Philippines, India and elsewhere, closing deals in Russia proved challenging. In 2008, Donald Trump Jr. praised the opportunities in Russia, but also called it a “scary place” to do business because of corruption and legal complications.

Mr. Sater said that American hotel chains that had moved into Russia did so with straightforward agreements to manage hotels that other partners owned. Mr. Trump, by contrast, was pursuing developments that included residential or commercial offerings in which he would take a cut of sales, terms that Russians were reluctant to embrace.

Even so, Mr. Trump said his efforts put him in contact with powerful people there. “I called it my weekend in Moscow,” Mr. Trump said of his 2013 trip to Moscow during a September 2015 interview on “The Hugh Hewitt Show.” He added: “I was with the top-level people, both oligarchs and generals, and top of the government people. I can’t go further than that, but I will tell you that I met the top people, and the relationship was extraordinary.”

When asked about Mr. Trump’s claim that he had “stayed away” from Russia, Alan Garten, general counsel for the Trump Organization, said it was a fair characterization given that none of the development opportunities ever materialized. Mr. Trump’s interest in Russia, he said, was no different from his attraction to other emerging markets in which he investigated possible ventures. Mr. Garten did not respond to questions about whom Mr. Trump met with in Moscow in 2013 and what was discussed.

Ted Liebman, an architect based in New York, got the call in 1996. Mr. Trump and Liggett-Ducat, an American tobacco company that owned property in Moscow, wanted to build a high-end residential development near an old Russian Olympic stadium. As they prepared to meet with officials in Moscow, they needed sketches of the Trump tower they envisioned.

The architect scrambled to meet the request, handing over plans to Mr. Trump at his Manhattan office. “I hope we can do this,” Mr. Liebman recalled Mr. Trump telling him.

Soon after, Mr. Trump was in Russia, promoting the proposal and singing the praises of the Russian market.

“I’ve seen cities all over the world. Some I’ve liked, some I haven’t,” Mr. Trump said at a news conference in Moscow in 1996, according to The Moscow Times. But he added that he didn’t think he had ever been “as impressed with the potential of a city as I have been with Moscow.”

Mr. Trump had been eyeing the potential for nearly a decade, expressing interest to government officials ranging from the Soviet leader Mikhail S. Gorbachev (they first met in Washington in 1987) to the military figure Alexander Lebed. 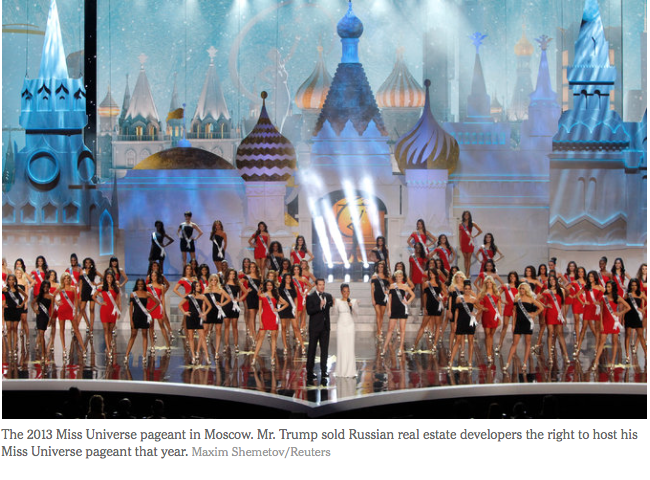 The 1996 project never materialized, but by then Mr. Trump was already well known in Russia. Moscow was in the midst of a construction boom, which transformed the capital from a drab, post-Soviet expanse into a sparkly modern city.

Yuri M. Luzhkov, Moscow’s mayor at the time, said in an interview that he had met with Mr. Trump and showed him plans for a massive underground shopping mall just outside the Kremlin gates. Mr. Trump suggested connecting it to the Metro, “a very important observation,” Mr. Luzhkov said. Today, visitors to the Okhotny Ryad shopping center can go straight from the Metro to the Calvin Klein store without venturing into the cold.

In the following years, Mr. Trump’s pursuit of Russia was strengthened by a growing circle of partners and associates in Canada and the United States who had roots in the region. Among them were Tevfik Arif, a former Soviet-era commerce official originally from Kazakhstan who founded a development company called the Bayrock Group, and Mr. Sater, a partner in the firm, who had moved to New York from Russia as a child.

Bayrock was in Trump Tower, two floors below the Trump Organization. While working to take Trump-branded towers to Arizona, Florida and New York’s SoHo neighborhood, Bayrock also began scouting for deals in Russia and other countries.

“We looked at some very, very large properties in Russia,” Mr. Sater said. “Think of a large Vegas high-rise.”

When Mr. Sater traveled to Moscow with Ivanka and Donald Trump Jr. to meet with developers in 2006, he said their attitude could be summarized as “nice, big city, great. Let’s do a deal here.”

Mr. Trump continued to work with Mr. Sater even after his role in a huge stock manipulation scheme involving Mafia figures and Russian criminals was revealed; Mr. Sater pleaded guilty and served as a government informant. 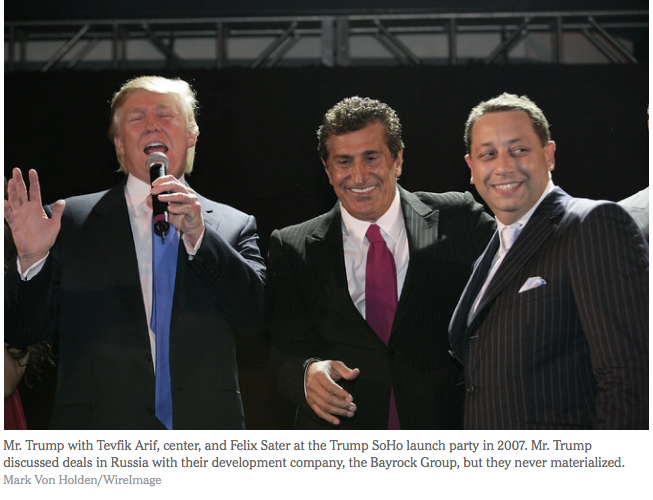 In 2007, Mr. Trump discussed a deal for a Trump International Hotel and Tower in Moscow that Bayrock had lined up with Russian investors.

“It would be a nonexclusive deal, so it would not have precluded me from doing other deals in Moscow, which was very important to me,” Mr. Trump said in a deposition in an unsuccessful libel suit he brought against Tim O’Brien, a journalist.

He claimed the development had fallen apart after Mr. O’Brien wrote a book saying that Mr. Trump was worth far less than he claimed. But Mr. Trump said he was close to striking another real estate deal in Moscow.

“We’re going to do one fairly soon,” he said. Moscow, he insisted “will be one of the cities where we will be.”

The Trump brand did appear in Russia, but not quite as the grand edifice the real estate mogul had envisioned.

Trump Super Premium Vodka, with the shine of bottles glazed with 24-karat gold, was presented at the Millionaire’s Fair in Moscow in 2007, and large orders for the spirits followed. The vodka was sold in Russia as late as 2009, but eventually fizzled out. In a news release, Mr. Trump heralded it as a “tremendous achievement.”

He tried — and failed — to start a reality show in St. Petersburg in 2008 starring a Russian mixed martial arts fighter.

But real estate developments remained a constant goal. From 2006 to 2008, his company applied for several trademarks in Russia, including Trump, Trump Tower, Trump International Hotel and Tower, and Trump Home, according to a record search by Sojuzpatent, a Russian intellectual property firm. 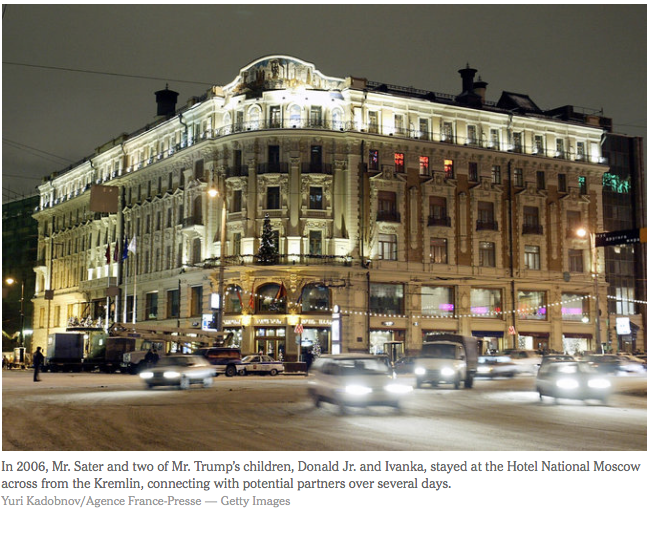 Donald Trump Jr. became a regular presence in Russia. Speaking at a 2008 Manhattan real estate conference, he confessed to fears of doing business in Russia, saying there is “an issue of ‘Will I ever see my money back out of that deal or can I actually trust the person I am doing the deal with?’” according to coverage of his remarks in eTurboNews.

But he told the Manhattan audience that “I really prefer Moscow over all cities in the world” and that he had visited Russia a half-dozen times in 18 months.

In 2011, he was still at it. “Heading to the airport to go to Moscow for business,” he tweeted that year.

Mr. Trump himself was back in Moscow in 2013, attending the Miss Universe pageant, which he owned with NBC.

Earlier that year, at the Miss USA pageant in Las Vegas, he had announced that Aras and Emin Agalarov, father and son real estate developers in Russia, would host the worldwide competition.

Erin Brady, that year’s Miss USA winner, who watched the announcement from backstage of the auditorium at Planet Hollywood Resort and Casino, said the news was a surprise. She was expecting one of the Latin American countries where beauty pageants are widely celebrated.

Phil Ruffin, Mr. Trump’s partner in the Trump International Hotel and Tower in Las Vegas, said he was happy to lend him his new Global 5000 private plane for the trip. He and his wife met Mr. Trump in Moscow, also checking into the Ritz-Carlton. Mr. Ruffin said he and Mr. Trump had lunch at the hotel with the Agalarovs.

The Agalarovs also reportedly hosted a dinner for Mr. Trump the night of the pageant, along with Herman Gref, a former Russian economy minister who serves as chief executive of the state-controlled Sberbank PJSC, according to Bloomberg News.

Talk of development deals swirled around the visit, and Mr. Trump sent out his tweet, promising that Trump Tower Moscow was coming.

But the tower never appeared on the skyline.