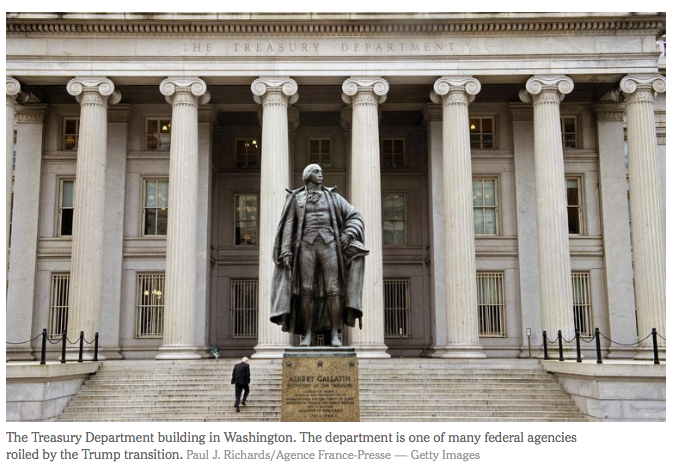 WASHINGTON — Across the vast federal bureaucracy, Donald J. Trump’s arrival in the White House has spread anxiety, frustration, fear and resistance among many of the two million nonpolitical civil servants who say they work for the public, not a particular president.

At the Environmental Protection Agency, a group of scientists strategized this past week about how to slow-walk President Trump’s environmental orders without being fired.

At the Treasury Department, civil servants are quietly gathering information about whistle-blower protections as they polish their résumés.

At the United States Digital Service — the youthful cadre of employees who left jobs at Google, Facebook or Microsoft to join the Obama administration — workers are debating how to stop Mr. Trump should he want to use the databases they made more efficient to target specific immigrant groups. 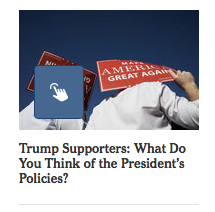 “It’s almost a sense of dread, as in, what will happen to us,” said Gabrielle Martin, a trial lawyer and 30-year veteran at the Denver office of the Equal Employment Opportunity Commission, where colleagues now share daily, grim predictions about the fate of their jobs under Mr. Trump’s leadership.

“It’s like the movie music when the shark is coming,” Ms. Martin said, referring to “Jaws,” the 1975 thriller. “People are just wary — is the shark going to come up out of the water?”

This article is based on interviews around the country with more than three dozen current and recently departed federal employees from the Internal Revenue Service; the Pentagon; the Environmental Protection Agency; the Justice and Treasury Departments; the Departments of Homeland Security, Veterans Affairs, and Housing and Urban Development; and other parts of the government. They reveal a federal work force that is more fundamentally shaken than usual by the uncertainties that follow a presidential transition from one party to the other. 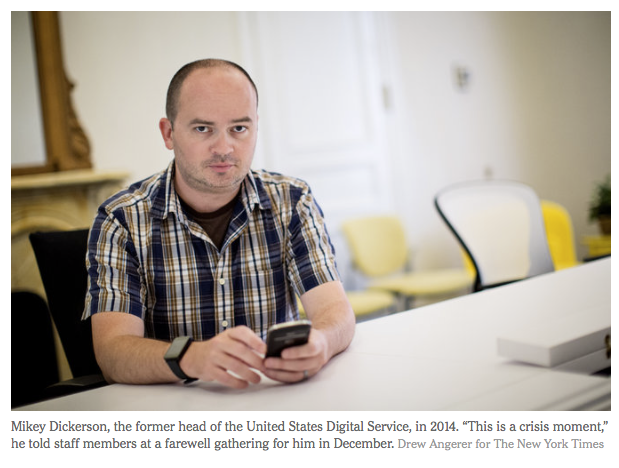 Federal workers are more likely to be Democrats, according to surveys. But partisanship and ideology explain only some of the intense feelings among workers, many of whom have seen Democrats and Republicans in the White House come and go.

At bars after work, in employee break rooms, on conference calls and on social media networks, employees at agencies targeted for steep reductions fear for their jobs. They worry about Mr. Trump’s freeze on hiring and regulations, his pledge to reverse environmental protections, and his executive order shutting down immigration for refugees and people from seven predominantly Muslim countries.

Some federal workers welcome Mr. Trump’s promises to create new jobs, build infrastructure and lower taxes. Others say they are focusing on doing their jobs and trying not to be distracted by the political noise that surrounds them. Still others say they are struggling with the question of whether they want to work for a president with whom they so strongly disagree.

“What do you do,” asked Representative Gerald E. Connolly, Democrat of Virginia, if you work at a place where the leader “avowedly renounces the work of that agency?”

“All of a sudden, you are faced with a real moral dilemma,” continued Mr. Connolly, whose district just outside Washington is home to thousands of federal workers.

Federal workers watched with growing alarm last year as Mr. Trump waged a campaign filled with antigovernment bombast and then during a transition in which he recruited cabinet secretaries hostile to the agencies they lead. Now they wait in these chaotic early days of Mr. Trump’s presidency as he and his political advisers use executive orders to shred the policies and traditions the workers have championed.

The intensity of feeling was already raw in late December, when members of the Digital Service gathered for drinks at the Laughing Man Tavern, a Washington bar, to say goodbye to Mikey Dickerson, their boss and the Google engineer first hired to rescue HealthCare.gov, the government’s Affordable Care Act website.

Mr. Dickerson had recruited many of them to overhaul outdated government systems and databases, with the goal of helping President Barack Obama open the country’s doors to refugees, protect immigrants, aid veterans and improve health care. Now, he said, those who choose to stay will be building better tools for the agenda of Mr. Trump. 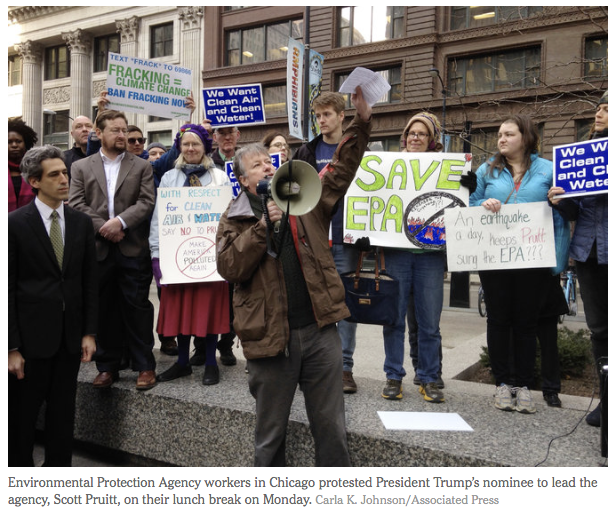 “This is a crisis moment,” Mr. Dickerson told his staff that night, according to a rough transcript of his remarks. “The coalition that brought us all together for a while is broken, because the values that we have all prioritized differently are now pointing in different directions.”

Four days after Mr. Trump’s inauguration, two of Mr. Trump’s advisers — Reed Cordish and Chris Liddell — attended the Digital Service’s staff meeting. The pair, who are close to Jared Kushner, the president’s son-in-law, told the nearly 100 staff members that their expertise was valued by the president; Mr. Kushner; Stephen K. Bannon, the president’s chief strategist; and others in the West Wing.

The message was meant to provide reassurance. But several members of the team said it had the opposite effect. One employee who still works there said it was the moment she realized their combined technological prowess would be harnessed for a new purpose.

“At that moment, when folks heard the name Steve Bannon, it was like a punch in the gut. It became so real,” said the employee, who declined to be identified for fear of reprisals.

Career employees are particularly nervous at the E.P.A., which Mr. Trump repeatedly singled out for attack on the campaign trail, vowing at one point to “get rid of” the agency. On Monday, about 100 employees at the agency’s Chicago office, which oversees the enforcement of environmental regulations in five Midwestern states, used their lunch hour to protest the Senate’s confirmation of Scott Pruitt, the Oklahoma attorney general, to lead the agency. Mr. Pruitt was a fierce critic of its mission under Mr. Obama.

“I have been through several transitions, but I have never had or seen this level of alarm,” said Nicole Cantello, an E.P.A. lawyer in the Chicago office, who heads the Chicago-area union of the agency’s employees.

Ms. Cantello, who has worked for the E.P.A. prosecuting cases since 1990, said that during the George W. Bush administration, some career employees had quietly bristled at more industry-friendly environmental regulations. But at no point did they feel the alarm they do now, she said.

“Unless there’s an abject abandoning of E.P.A.’s role in the world, we’ll do what we’re told to do,” she said.

In a video to E.P.A. employees this past week, the acting administrator, Catherine R. McCabe, acknowledged that “many of you are concerned about” reports that climate change data had been removed from the department’s websites.

“I would like to allay the fears and rumors that scientific data and information are being deleted,” she said. “That is not the case.”

Despite such reassurances, the concerns of federal employees are being spread across social media, on accounts with names like “@Rogue_DOD,” “@Alt_DeptofEd” and “@AngryWHStaffer.” One anonymous Twitter user created “@WhitehouseLeaks,” with a purported mission to reveal the secret workings of the Trump administration from within the West Wing.

Many federal employees recoiled at reports that the president was about to issue an executive order rolling back certain rights for lesbians, gays and transgender people.

“There was a group of people who were planning some public display of protest with the purpose of leaving,” a federal employee in Washington said. Another official, who worked at Treasury until this past week, said his friends would have considered that order “the last straw” and most likely would have quit. The president did not issue such an order.

Many government employees said they were inspired by the actions of Sally Q. Yates, a top Obama-era official in the Justice Department whowas fired as acting attorney general after she refused to order the department’s lawyers to defend the legality of Mr. Trump’s travel ban.

More than 1,000 State Department diplomats registered their opposition to the ban by signing a dissent letter asserting that the new policy would “run counter to core American values” and would not make the country safer.

At the Defense Department, where uniformed men and women work with civilians, several rank-and-file employees expressed outrage that Mr. Trump would announce the travel ban at the Pentagon, a building filled with people from different faiths and countries. That same day, the Defense Department posted a message on Twitter about a former refugee who became a Marine. “From refugee to #Marine. @USMC Cpl Ali J. Mohammed takes his fight to the doorstep of those who cast his family out,” it read.