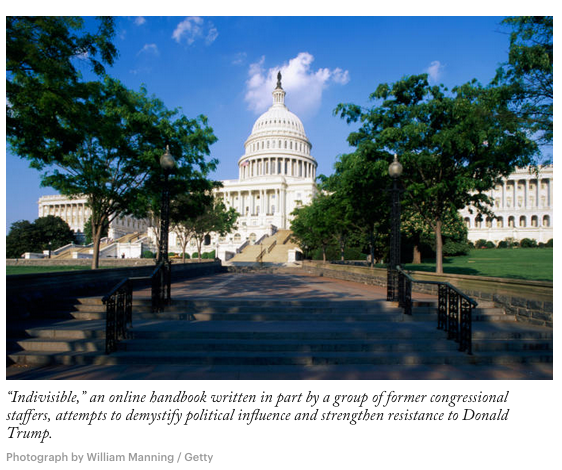 On Wednesday, around 7 P.M., a Google document entitled “Indivisible: A Practical Guide for Resisting the Trump Agenda” began making the rounds online. Its origin was the Twitter account of Ezra Levin, a thirty-one-year-old associate director at a national anti-poverty nonprofit, and self-described “Twitter novice,” who lives in D.C. and, until a few days ago, had roughly six hundred and fifty followers. His tweet’s simple message, “Please share w/ your friends to help fight Trump’s racism, authoritarianism, & corruption on their home turf,” belied three weeks of unpaid work by some three dozen mostly young progressives who had been collaborating on the document since the week of Thanksgiving.

Levin and his wife, Leah, had gone to Austin, Texas, where he grew up, for the holiday, and had met with a college friend of his, named Sara Clough, at a local bar. Clough was an administrator of a private Facebook group that describes itself as “a place for support, healing, helping, sharing, community and love in the wake of the 2016 election.” Clough and others who belonged to progressive online communities—such as Pantsuit Nation—were “trying to figure out how best to act,” Levin said. “They knew that making calls and signing petitions were helpful, but then they hit a wall. They didn’t know what else to do or how to effectively engage Congress.” It seemed to Levin that there would be value in “describing what Goldman Sachs and Exxon Mobil already know.” As former congressional staffers—until 2011, Levin was the deputy policy director for Congressman Lloyd Doggett, who represents a district in central Texas—he and his friends could “demystify” congressional influence.

In the end, thirty or so thirty-somethings—most, but not all, in the D.C. area—ended up contributing, often virtually but sometimes sitting around a table in Levin’s Columbia Heights living room, crafting a guide to best practices. Some wrote whole sections; others edited for content or proofread. “A lot of folks contributed specific tactics they’d seen in their own congressional offices, or had read or heard about,” Levin said. They showed the evolving document to some of their parents and to people outside their D.C. bubble, asking, “Does this make sense? If you received it, would it be useful?” Though still unnamed, the project “became our hobby,” he said.

There was no deadline, he noted, “except we wanted to get it out before people left town for Christmas and the holidays and stopped checking e-mail or reading documents that are twenty-three pages long about how to save democracy.”

Even in its publicly released version, it’s still described as a “work in progress.” It is, by design, more practical than philosophical. “It’s not rocket science,” Levin said. “There are specific steps you can take to make change happen.” The text contains four chapters, amounting to a wonky choose-your-own-political-adventure: “How grassroots advocacy worked to stop Obama,” “How your MoC thinks and how to use that to save democracy,” “Identify or organize your local group,” and “Four local advocacy tactics that actually work.” Experience and research had revealed to Levin and the other authors that, “despite the despair that many progressives may be feeling right now, there really actually is a model for success.” Unfortunately, it belonged to the Tea Party.

The document analyzes the strategic wisdom of the Tea Party, focussing on its local activism and emphasis on defense rather than offense. “We tried to be really clear in the document that, like it or not, the Tea Party really did have significant accomplishments—facing more difficult odds than we face today—and that it’s worth thinking about what parts of their strategy and tactics really enabled that,” Levin said. “We aimed to balance that acknowledgment by being very clear that we’re not endorsing the Tea Party’s horrible and petty scare tactics.”

Jim Manley, a Democratic strategist and a former staffer for Senators Edward Kennedy and Harry Reid, told me that he was impressed that the document “urges people to play defensive baseball.” “I understand the need for a positive agenda, as do they,” he added. “But I think they’re correct in their assessment on copying some of the tactics of the Tea Party and trying to make Republicans feel pain or pay a price for some of the stuff they’re about to vote on.” He said that he planned to keep the document on his desktop and work with it in the future.

There was some internal debate over whether the document should have a proactive agenda, or, like the Tea Party, focus on “just saying no” a lot. “We had to accept the hard truth that Republicans have unified control of the federal government and will be setting the agenda,” Levin said. “So when we’re thinking about what strategy local activists should take when they’re talking to their own members of Congress, they’re going to have the greatest impact if they’re being extraordinarily responsive to the agenda that those Republican members of Congress are setting.” There was also a lot of discussion about the guide’s name. “I don’t think anybody is wed to it,” Levin said. “There were a lot of policy wonks involved, not branding people, and that shows. I’ve misspelled the word ‘indivisible’ several times.”

Three authorial Twitter handles appear on “Indivisible,” belonging to Levin, Jeremy Haile (who worked in Congressman Doggett’s office with Levin), and Angel Padilla (one of Levin’s friends from Princeton’s Woodrow Wilson School of Public and International Affairs, where he got a graduate degree). “We were three of the only people who had Twitter accounts,” Levin explained. “We also didn’t want there to be some kind of mysterious, anonymous document that came out and inspired folks to speculate about its author. To avoid that scenario, we put a handful of names on it.” Beyond that, he hoped, the document would speak for itself.

The guide declares, “Our goal is to provide practical understanding of how your MoCs think, and how you can demonstrate to them the depth and power of the opposition to Donald Trump and Republican congressional overreach. This is not a panacea, nor is it intended to stand alone. We strongly urge you to marry the strategy in this guide with a broader commitment to creating a more just society, building local power, and addressing systemic injustice and racism.”

“Indivisible” has, in the two days since its release, gone viral. It has been shared by the former Secretary of Labor Robert Reich, the author and filmmaker Miranda July, and, as Levin said yesterday, “that guy from ‘Star Trek.’ What’s his name?” Levin’s wife, Leah (who is also a former congressional staffer and an “Indivisible” contributor), listening in the other room, helped him remember: George Takei, the helmsman of the Enterprise on the TV show and a liberal activist in real life. Takei tweeted to his two million followers, “Welcome to the resistance. Required reading against the darkening tide.” Another “Star Trek” alum, Wil Wheaton, shared it, too. (“I had to Google him to see who this guy with three million followers was,” Levin said.)

Levin admits to excitement at seeing famous people share their work. “But what really warm my heart are the local activists with a couple dozen followers who are jazzed up,” he said. “When someone writes, ‘To anybody else in North Carolina’s 3rd District, this is the guide we should get together and use,’ that’s just music to my ears.” He added, “I was prepared for nothing to happen; that was the assumption. I was also prepared that, if something did happen, there’d be a rapid response from trolls. I’ve seen none yet. I assume that’s coming.”

No print edition is planned, Levin said, “unless the folks out there that have the guide decide to print it. I hope they export it to a Word document and make it their own. That would be amazing to see.”