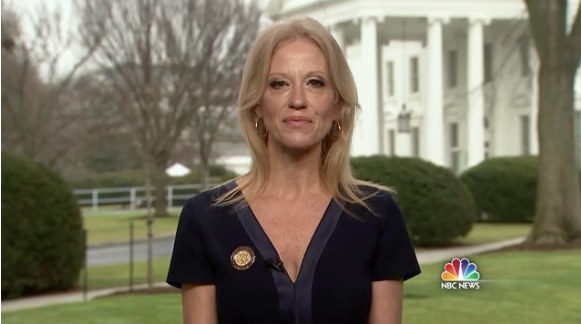 Kellyanne Conway, counselor to President Donald Trump, said the White House press secretary gave “alternative facts” when he inaccurately described the inauguration crowd as “the largest ever” during his first appearance before the press this weekend.

White House Press Secretary Sean Spicer gathered the press to deliver a five-minute statement Saturday in which he issued multiple falsehoods, declaring erroneously the number of people who used the D.C. metro on Friday, that there was a change in security measures this year and that “this was the largest audience to ever witness an inauguration, period, both in person and around the globe.”

“These attempts to lessen the enthusiasm of the inauguration are shameful and wrong,” Spicer said Saturday.

However, crowd size experts told the New York Times they estimated Trump’s audience at fewer than 200,000 people, and widely distributed side-by-side photographs showed the stark contrast between the comparatively sparse crowd for Trump’s inauguration and the record-setting crowd for Obama’s first.

Asked on “Meet the Press” why Spicer used his first appearance before the press to dispute a minimal issue like the inauguration crowd size, and why he used falsehoods to do so, Conway pushed back.

She then went on to echo Spicer’s claim on Saturday that it wasn’t possible to count the crowd, despite Trump’s team’s accompanying insistence that it was the “largest audience.”

“I don’t think you can prove those numbers one way or another. There’s no way to quantify crowd numbers,” Conway said.

Conway also suggested that Todd’s insistence on asking why Spicer delivered a demonstrably false statement could affect the White House’s treatment of the media.

“If we’re going to keep referring to the press secretary in those types of terms I think we’re going to have to rethink our relationship here,” she said.