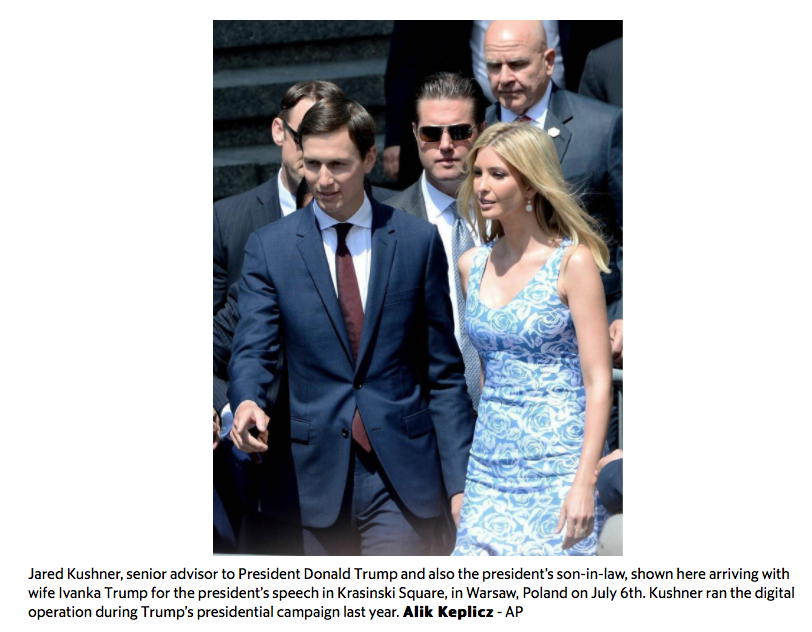 Investigators at the House and Senate Intelligence committees and the Justice Department are examining whether the Trump campaign’s digital operation – overseen by Jared Kushner – helped guide Russia’s sophisticated voter targeting and fake news attacks on Hillary Clinton in 2016.

CLICK IMAGE ABOVE for direct link to McClatchy story.

Congressional and Justice Department investigators are focusing on whether Trump’s campaign pointed Russian cyber operatives to certain voting jurisdictions in key states – areas where Trump’s digital team and Republican operatives were spotting unexpected weakness in voter support for Hillary Clinton, according to several people familiar with the parallel inquiries.

Also under scrutiny is the question of whether Trump associates or campaign aides had any role in assisting the Russians in publicly releasing thousands of emails, hacked from the accounts of top Democrats, at turning points in the presidential race, mainly through the London-based transparency web site WikiLeaks, .

Rep. Adam Schiff of California, ranking Democrat on the House Intelligence Committee, told McClatchy he wants to know whether Russia’s “fake or damaging news stories” were “coordinated in any way in terms of targeting or in terms of timing or in terms of any other measure … with the (Trump) campaign.”

By Election Day, an automated Kremlin cyberattack of unprecedented scale and sophistication had delivered critical and phony news about the Democratic presidential nominee to the Twitter and Facebook accounts of millions of voters. Some investigators suspect the Russians targeted voters in swing states, even in key precincts. 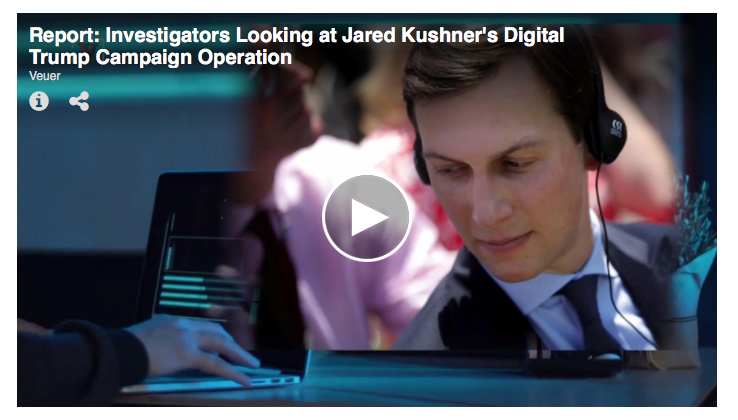 Russia’s operation used computer commands knowns as “bots” to collect and dramatically heighten the reach of negative or fabricated news about Clinton, including a story in the final days of the campaign accusing her of running a pedophile ring at a Washington pizzeria.

One source familiar with Justice’s criminal probe said investigators doubt Russian operatives controlling the so-called robotic cyber commands that fetched and distributed fake news stories could have independently “known where to specifically target … to which high-impact states and districts in those states.”

All of the sources spoke on condition of anonymity because the investigation, led by Special Counsel Robert Mueller, is confidential.

Top Democrats on the committees investigating Russian interference in the 2016 election have signaled the same.

Schiff said he wants the House panel to determine whether Trump aides helped Russia time its cyberattacks or target certain voters and whether there was “any exchange of information, any financial support funneled to organizations that were doing this kind of work.”

Trump son-in-law Kushner, now a senior adviser to the president and the only current White House aide known to be deemed a “person of interest” in the Justice Department investigation, appears to be under the microscope in several respects. His real estate finances and December meetings with Russia’s ambassador and the head of a sanctioned, state-controlled bank are also being examined.

Kushner’s “role as a possible cut-out or conduit for Moscow’s influence operations in the elections,” including his niche overseeing the digital operations, will be closely looked at, said the source knowledgeable about the Justice Department inquiry.

Kushner joined Donald Trump Jr. and Trump campaign Chairman Paul Manafort at a newly disclosed June 2016 meeting with a Russian lawyer at Trump Tower in New York.. The meeting, revealed by The New York Times, followed emails in which Trump Jr. was told the lawyer for the Russian government would provide him with incriminating information on Clinton and he replied “If it’s what you say I love it.”

That disclosure could only serve to heighten interest in whether there was digital collaboration.

Mike Carpenter, who in January left a senior Pentagon post where he worked on Russia matters, also has suspicions about collaboration between the campaign and Russia’s cyber operatives.

“There appears to have been significant cooperation between Russia’s online propaganda machine and individuals in the United States who were knowledgeable about where to target the disinformation,” he said, without naming any American suspects.

Trump has repeatedly repudiated or equivocated about the finding of four key intelligence agencies – the FBI, CIA, National Security Agency and the Directorate of National Intelligence – that Russian cyber operatives meddled with the U.S. election.

Last Friday, during their first face-to-face meeting, Trump questioned Putin about Russia’s role in the election meddling and Putin denied culpability, said Secretary of State Rex Tillerson, who was present. Trump then said the two countries should find ways to move forward in their relationship, Tillerson said.

A Russian official who was at the meeting said the two sides agreed to form a working group to address cybersecurity, including interference in other countries’ internal affairs. However, Trump backtracked Sunday night, saying in a tweet that he doesn’t believe such an effort can happen.

As more has been learned about the breadth of the Russian cyber onslaught, congressional Democrats have shown growing resolve to demand that the Republican-controlled intelligence committees fully investigate ways in which Trump associates may have conspired with the Russians.

Among other things, congressional investigators are looking into whether Russian operatives, who successfully penetrated voting registration systems in Illinois, Arizona and possibly other states, shared any of that data with the Trump campaign, according to a report in Time.

“I get the fact that the Russian intel services could figure out how to manipulate and use the bots,” Virginia Sen. Mark Warner told Pod Save America recently. “Whether they could know how to target states and levels of voters that the Democrats weren’t even aware (of) really raises some questions … How did they know to go to that level of detail in those kinds of jurisdictions?”

The Russians appear to have targeted women and African-Americans in two of the three decisive states, Wisconsin and Michigan, “where the Democrats were too brain dead to realize those states were even in play,” Warner said.

Twitter’s and Facebook’s search engines in those states were overwhelmed, he said, meaning they couldn’t discern fake news from real news.

It started even before Trump locked up the nomination. Throughout the Republican primary elections in early 2016, Russia sent armies of bots carrying pro-Trump messages and deployed human “trolls” to comment in his favor on Internet stories and in social media, former FBI special agent Clint Watts told Congress weeks ago.

As Donald Trump was locking up the Republican presidential nomination in May 2016, a U.S. intelligence intercept picked up Russians discussing ways to spread news damaging to Clinton, two people familiar with the matter said.

No one has proved that Russia’s attack influenced the vote count in the Nov. 8 general election., but it wouldn’t have taken much to tip the results and change the course of history.

Kushner’s pivotal role in the Trump cyber effort was underscored by his hiring in 2015 of Brad Parscale, a Texas-based digital guru who previously had done work for the Trump Organization, said two GOP operatives familiar with the campaign.

Parscale’s company raked in about $90 million for work targeting many states with paid advertisements, social media messages and other cyber tools.

As the Trump campaign’s top digital director, Parscale ran much of the operation from his San Antonio offices. He is expected to appear before at least one of several congressional committees investigating aspects of Russia’s interference in the election.

CNN quoted him last month as dismissing suggestions that Russian-directed online bots would have been effective in swinging votes to Trump. He said the campaign did not find Twitter — where those bots mainly functioned – to be an effective tool.

Washington attorney Abbe Lowell, who was recently hired to be Kushner’s chief defense counsel and has “a reputation as a guy you hire if you’re going to do battle with the government,” according to one former federal prosecutor, declined to comment on the Russia inquiries facing Kushner.

Shortly after his name arose in the inquiry, Kushner publicly volunteered to tell Congress about his Russia contacts and to answer questions about all issues for which he’s being scrutinized. Another of Kushner’s lawyers, Jamie Gorelick, says he will cooperate with both congressional and Justice Department investigations.

However, no interview date has been set, and Kushner’s attorneys decline to say whether he has produced records sought by the Senate Intelligence Committee.

UPDATE: THIS STORY HAS BEEN UPDATED TO CLARIFY THAT SOME INVESTIGATORS SUSPECT RUSSIA TARGETED VOTERS IN SWING STATES AND EVEN KEY PRECINCTS. 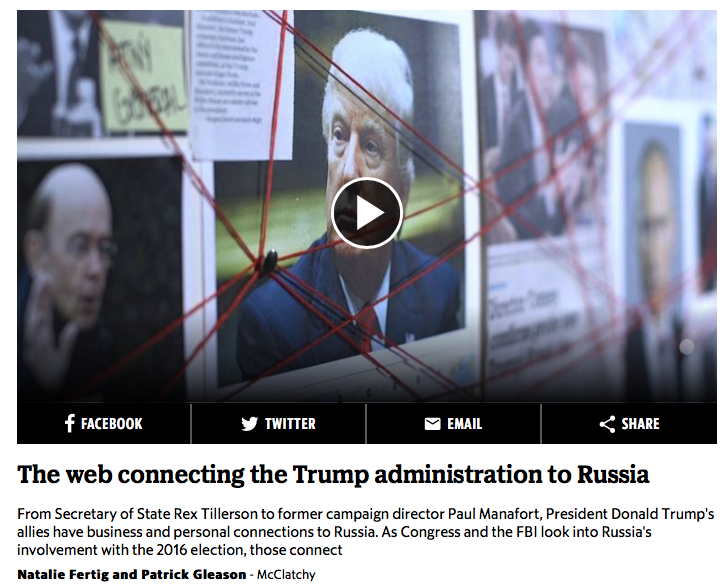