LAT: Ahead of Putin meeting, Trump waffles on Russian meddling in 2016 election 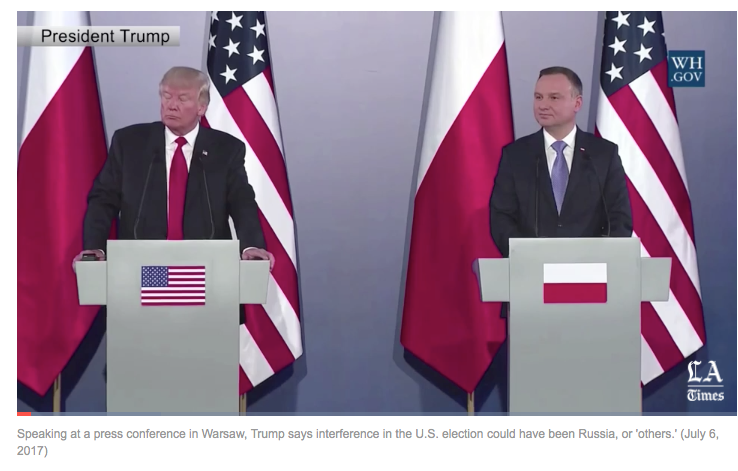 On the eve of his first face-to-face meeting as president with Russia’s Vladimir Putin, Donald Trump on Thursday declined to hold the Kremlin solely responsible for meddling in the 2016 U.S. presidential campaign, insisting that others may have interfered as well.

CLICK IMAGE ABOVE for direct link to LAT story & video.

Trump’s remarks during a visit to Poland, hours before arriving in Germany for a two-day summit of the Group of 20 major and emerging economies, seemed to answer in the negative the main question hanging over his highly anticipated session with Putin: Would he chastise the Russian president in person for what the U.S. intelligence community has said was a complex spy operation designed to undermine the U.S. elections and help Trump win?

Breaking with the norms of presidential foreign visits, in his comments Trump strongly criticized his predecessor Barack Obama by name, as he stood alongside the Polish president for a news conference.

In a separate speech before Poles crowding Warsaw’s historic Krasinski Square, Trump did signal areas where he might confront the Russian autocrat. He chided Russia​​​ for “destabilizing activities” in Ukraine and signaled a U.S. intent to step up energy supplies to Eastern Europe, as an alternative to Russian sources that Moscow occasionally has manipulated to “coerce” weaker neighbors, as Trump put it. In an implicit rebuke, he invited Russia to join “the community of responsible nations” in fighting extremism.

Trump, at the news conference, also said he was considering some unspecified, “pretty severe things” in response to North Korea’s test firing of a ballistic missile capable of hitting parts of the United States. “Something will have to be done about it,” he said.

After the Warsaw stop, Trump flew to Hamburg, Germany, for a sit-down with Chancellor Angela Merkel on Thursday evening and a joint meeting with Japanese Prime Minister Shinzo Abe and South Korean President Moon Jae-in, at which North Korea was to be the focus.

On Friday, those leaders and others in the G-20 were to begin their annual summit with meetings on counter-terrorism, economic growth and trade, and climate change — topics that divide Trump from many of his counterparts. But the Trump-Putin meeting will command much attention.

The theme of Trump’s sweeping speech in Warsaw, a city leveled by Nazi forces in World War II, was his warning of what he depicted as the current, existential threat to Western civilization from “radical Islamic extremism.”

Making his first stop in a country once under Russian domination was the White House’s way of letting Trump project strength and resolve ahead of the Putin meeting. But Trump’s reluctance again to unequivocally assert that Russia was behind a concerted campaign of cyber meddling in the election risked muddling that message, even as both Republicans and Democrats have called on him to confront Putin about it.

Trump’s joint news conference with President Andrzej Duda, a right-wing populist who has cracked down on immigration, the judiciary and the press in Poland, reflected both men’s adversarial relationship with reporters. Before his foreign audience, Trump repeated his attacks on “fake news,” and CNN and NBC in particular, turning to a smirking Duda at one point to ask jokingly, “Do you have that problem?”

His characterization of Russian election interference was somewhat flip, in contrast with the near-certitude of U.S. intelligence assessments that the Kremlin directed a concerted campaign of cyber meddling meant to help Trump beat his Democratic rival, Hillary Clinton. ”Nobody really knows for sure,” Trump said.

“I think it was Russia, and it could have been other people in other countries,” he said. “I think a lot of people interfered.”

Even while leaving conditional the degree of interference by Moscow — “if Russia did it,” as he put it — Trump also renewed an attack against his predecessor, Obama, falsely saying he had failed to act when intelligence officials informed him of Russian interference months before the election. Among other things, Obama privately confronted Putin and in December imposed sanctions on Russia and expelled 35 Russian officials from the United States.

“He did nothing about it,” said Trump. “The reason is he thought Hillary was going to win. And if he thought I was going to win, he would have done plenty about it. So that’s the real question — is why did he do nothing from August all the way to Nov. 8?”

Trump also compared the apparent certainty of intelligence agencies about Russian meddling to assessments more than a decade earlier that Iraq had weapons of mass destruction.

“They were wrong and it led to a mess,” he said.

“This is not putting America first, but continuing to propagate his own personal fiction at the country’s expense,” Schiff said in a statement. “President Trump must have the courage to raise the issue of Russian interference in our elections directly with President Putin, otherwise the Kremlin will conclude he is too weak to stand up to them.”

At the news conference and in his speech, Trump did pledge to work with European allies “in response to Russia’s actions and destabilizing behavior” in Eastern Europe. In the speech before supportive Poles, Trump offered an explicit commitment to the NATO’s founding principle of common defense, which he had failed to endorse unambiguously at a May meeting of the alliance members in Brussels.

But Trump did so only in the context of reiterating his criticism of NATO allies for not contributing enough financially. He inaccurately took credit for “billions and billions” coming into the North Atlantic Treaty Organization as a result of his importuning members to pay more.

The Kremlin is hoping the meeting between Trump and Putin will be an opportunity for the two presidents to set an agenda without the filter of the media’s speculations, said Dmitry Peskov, Putin’s spokesman.

“There will be an opportunity to get to know and understand the true approach to bilateral relations, and not the one that is being broadcast,” Peskov said in a conference call Thursday with journalists.

As for Trump’s statements on Russian efforts to destabilize Eastern Europe, the Kremlin “does not agree,” Peskov said in the call.

But Poland’s president endorsed the Trump comments. “Mr. Trump is thinking very seriously about Poland’s security,” Duda told reporters, adding that he was convinced by his meeting with Trump that the U.S. is “our loyal ally.”

In advance of the American president’s speech, supporters of Duda’s ruling Law and Justice party lined the street outside the small landmark square, holding banners and Polish and American flags.

A few people wore the bright red baseball hats from Trump’s campaign with the words “Make America Great Again” written in white across the top. As some lawmakers from opposition parties walked through security, chants in the pro-Duda crowd went up, calling them “thief” and “traitor” in Polish.

When Trump came out onto the square, many people in the crowd waved Polish and American flags and chanted “Donald Trump” and “USA.”

Trump did upset some Poles: He is the first sitting U.S. president in nearly four decades to not visit a nearby memorial to the 1943 uprising by Jews forced to live in a Warsaw ghetto. His daughter Ivanka toured the memorial Thursday.

Trump’s visit to Poland marks a brief stop in an environment friendlier than the one that awaited him in Germany. Several European leaders, including Merkel, have been sharply critical of Trump’s protectionist policies on trade and his decision to pull the U.S. out of the Paris climate accord.

Like Trump, Duda was swept into power with a nationalist-populist message. He promised to protect Polish interests from international agreements and has set tight limits on immigration despite pressure from Western European leaders to accept more refugees from war-torn countries such as Syria.

Since being elected in 2015, Duda has launched a public campaign against the press and tried to undermine Polish media outlets. In the last year, his administration and allies that control the legislature have restricted reporters’ access, a clampdown on press freedom that sparked large protests in Warsaw in December.

The president declined to provide specifics about potential options under consideration to rein in Kim. “I don’t like to talk about what we have planned,” he said, adding, “They are behaving in a very, very dangerous manner.”