Download Indivisible: A Practical Guide For Resisting The Trump Agenda.

Former congressional staffers are publicizing their newly released “Indivisible Guide,” a manual for people, groups, and organizations who want to resist the incoming rightwing administration through grassroots action.

President-elect Donald Trump rose to power while losing the popular vote by a historic margin, and his lack of a mandate means a vocal and organized resistance can weaken Republican resolve and “[stiffen] Democratic spines,” the guide states.

“We know this because we’ve seen it before,” write the authors, former staffers who witnessed the Tea Party surge in President Barack Obama’s first term. “We saw these activists take on a popular president with a mandate for change and a supermajority in Congress.”

“We believe that protecting our values, our neighbors, and ourselves will require mounting a similar resistance to the Trump agenda—but a resistance built on the values of inclusion, tolerance, and fairness,” they write. “If a small minority in the Tea Party can stop President Obama, then we the majority can stop a petty tyrant named Trump.”

The guide, which began as a Google doc last month and whose full title is Indivisible: A Practical Guide for Resisting the Trump Agenda, outlines a step-by-step process of grassroots organizing and advocacy targeting Members of Congress (MoCs), from coordinated calls to sit-ins and photo op disruption.

MSNBC‘s Rachel Maddow covered the guide on her show Wednesday: 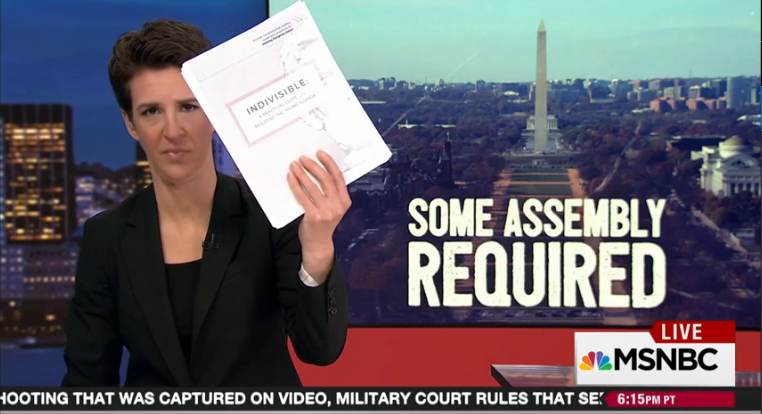 The guide is another form of organized opposition to the incoming administration, which has named cabinet nominees who would seemingly undermine the departments they were picked to lead.

On Wednesday, a coalition of thousands of activists, civic leaders, scientists, and journalists took out a full-page ad in the New York Times calling for people to coordinate long-term protests to resist Trump’s “fascist regime,” and the Women’s March on Washington is poised to be the largest inauguration day protest in history.

Meanwhile, action is stirring around the country. Climate campaigners on Tuesday announced the launch of the “official pushback” against Trump’s environmental plans, and leaders of the NAACP were arrested earlier this week after organizing a sit-in at Alabama Sen. Jeff Sessions’ office. Sessions, the nominee for Attorney General, was once deemed too racist to serve as a federal judge.

Some Democrats and allied forces are also gearing up to resist the coming Republican agenda, and progressive nonprofits last month reported an unprecedented wave of donations since the November election.

The congressional guide acknowledges these multi-faceted developments—indeed, that is part of the plan. “This is not a panacea, nor is it intended to stand alone,” the authors write. “We strongly urge you to marry the strategy in this guide with a broader commitment to creating a more just society, building local power, and addressing systemic injustice and racism.”

“We wrote this guide because we believe that the coming years will see an unprecedented movement of Americans rising up across the country to protect our values, our neighbors, and ourselves,” they write. “Our goal is to provide practical understanding of how your [MoCs] think, and how you can demonstrate to them the depth and power of the opposition to Donald Trump and Republican congressional overreach.”