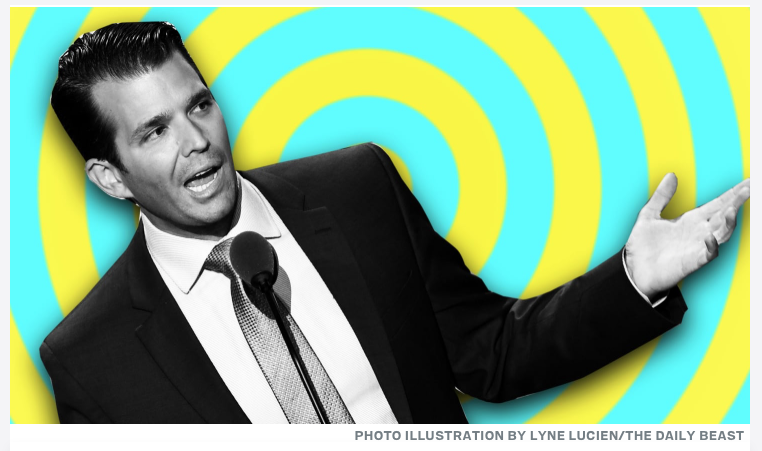 LACHLAN MARKAY 07.09.17
Former Trump campaign officials said Trump Jr.’s role in the scandal involving a Kremlin-linked lawyer is just the latest in a series of mistakes by the president’s first-born son.

President Donald Trump’s worst campaign surrogate is back in the limelight, and reminding some former Trump campaign colleagues why he earned the nickname “Fredo.”

CLICK IMAGE ABOVE for direct link to Daily Beast story.

Donald Trump Jr., the president’s eldest son, is now at the center of events fueling scrutiny of the campaign’s contacts with individuals tied to the Russian government who, the New York Times reported on Sunday, offered to share damaging information about Democratic presidential nominee Hillary Clinton with Trump Jr. and other senior campaign officials.

News of the meeting between Trump Jr. and a Russian lawyer with Kremlin ties has thrust Trump Jr. back into headlines—and revived the First Son’s haphazard practices that infuriated campaign operatives last year.

If the substance of the new revelations weren’t damning enough, Trump Jr. has invited additional scrutiny with public statements that only admitted the campaign was seeking damaging information about Clinton after media reports revealed additional details of the interactions.

People who worked and interacted with “Junior” during his father’s political rise in the Republican Party aren’t entirely surprised that the oldest Trump son would find himself in this mess. Current White House officials and former Trump campaign staffers recall Trump Jr. as a recurring liability and a chronic headache for the presidential campaign, prone to unforced errors and ill-advised activity on social media and elsewhere, and the precise “opposite of political savvy,” as one official put it.

Officials highlighted Trump Jr.’s failings as a campaign surrogate by pointing specifically to his news-cycle-hijacking tweet about poisoned Skittles and Syrian refugees and his friendly radio interview with Trump-boosting, white-supremacist host James Edwards in March of last year, among other incidents.

Ever since the campaign, a popular, behind-his-back nickname for Trump Jr. among some in his father’s political inner circle has been “Fredo,” referring to Fredo Corleone, the insecure and weak failure of a son in The Godfather series who ends up causing major damage to the crime family and contributing little of value. This has been relayed to The Daily Beast in several stories by Team Trump veterans over the past several weeks.

Others were more charitable, but acknowledged that he could chafe with colleagues. Another former campaign aide said he “didn’t have any issues with him, [but] he’s definitely got a ‘you work for me’ attitude.”

Trump Jr. caused frequent headaches for campaign communicators during the presidential race with public statements that ranged from inflammatory to allegedly plagiarized to completely at odds with the campaign’s long-established messaging on, for instance, his father’s refusal to release his tax returns.

Nevertheless, multiple administration officials said on Sunday that—despite Trump Jr. claims that he “basically” never speaks with his father since he became leader of the free world—he has continued to stay in contact with the president and has also kept up with some senior White House staff members.

Officials spoke on the condition of anonymity because they were not cleared to critique the president’s son.

Administration and former campaign officials saw unfortunate parallels between Trump Jr.’s campaign-era surrogacy activities and the pair of statements he released over the weekend responding to a pair of Times reports on his interactions with the lawyer, Natalia Veselnitskaya.

She represented Prevezon Holdings, a Russian-owned real estate firm incorporated in Cyprus that, along with its executives, was targeted by U.S. sanctions under a 2012 law called the Magnitsky Act. Veselnitskaya and others associated with Prevezon have pressed for years for Congress to lift those sanctions.

During the campaign, Trump, the president’s son in law and adviser Jared Kushner, and Paul Manafort, then the campaign’s chairman, met with Veselnitskaya after she relayed promises to provide damaging information about Clinton and her campaign, Trump admitted in a statement on Sunday to the Times.

It was the first concrete indication that the Trump campaign may have had contact with Russian government-linked individuals for the purposes of damaging Clinton’s campaign. U.S. intelligence agencies have concluded that the Kremlin attempted to aid the Trump campaign through hacks of the Clinton campaign and Democratic National Committee and propaganda and media manipulation.

Trump Jr. claimed that Veselnitskaya had actually been shopping evidence that the Russians were supporting Clinton and the DNC financially. But his statement acknowledging the political impetus for the meeting came only after the Times reported additional details. A prior Trump Jr. statement on Saturday omitted any mention of the opposition research that Veselnitskaya had offered to provide.

The White House referred questions to the president’s outside legal team. Mark Corallo, a spokesperson for that team, would not comment on the substance of the Times’ Sunday reporting, simply telling The Daily Beast in an email, “The President was not aware of and did not attend the meeting.”

Corallo released a statement on Saturday that suggested  the White House will attempt to portray the Veselnitskaya meeting as an attempt by Democratic researchers to tar the president with phony collusion allegations.

“We have learned that the person who sought the meeting is associated with Fusion GPS, a firm which according to public reports, was retained by Democratic operatives to develop opposition research on the President and which commission the phony Steele dossier,” Corallo wrote, referring to an intelligence document claiming the Russian government had amassed blackmail material on the president.

Fusion GPS has been accused of conducting undisclosed lobbying on behalf of Prevezon, which is owned by the son of Russia’s former transportation minister.

It’s not clear if the rhetorical strategy will succeed in light of Trump Jr.’s erratic public statements, but the eldest son is likely hoping that it will help spare him his father’s wrath, a long-standing concern for the 39-year-old.

One longtime staffer on Donald Trump’s NBC reality series The Apprentice told The Daily Beast on Sunday that Trump Jr. was constantly “terrified” of his father, and was in a near-perpetual state of not wanting to disappoint his dad whenever on-set. “After [Don Jr.] spoke, his eyes would dart to The Big Man to gauge the reaction [which ranged from] blank, passive approval or burning glare of disappointment [at Junior].”