Daily Beast: Is a Crook Hiding in Donald Trump’s Taxes? 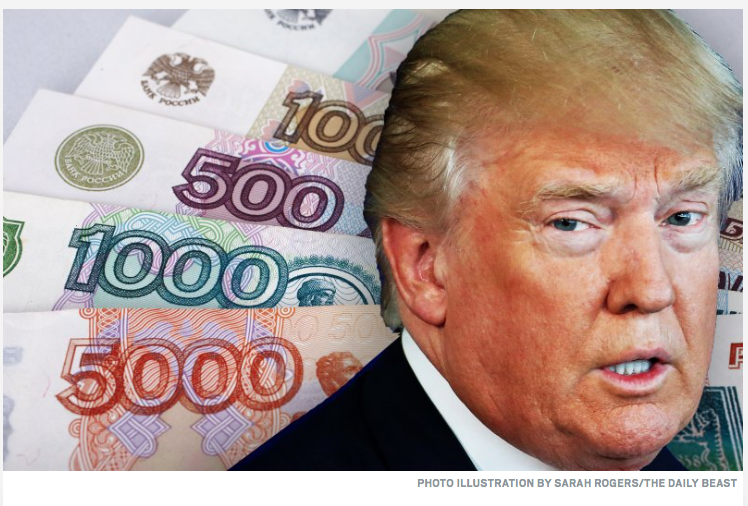 Donald Trump calls the Trump SoHo tower in lower Manhattan an architectural marvel. The real marvel is what happened to the profits, which vanished from America thanks to a deal with a corrupt Icelandic investment company with ties to Russian oligarchs—all under an arrangement that Trump himself approved.

The lawsuits say it was tax fraud, but the lawyer for the man behind the deal says it was perfectly legal tax planning.

It’s a story that should have voters asking hard questions about the Republican presidential nominee and his financial relationship with those oligarchs, whose fortunes depend on remaining in the good graces of the murderous Russian autocrat Vladimir Putin, whom Trump praises as a great leader.

These questions became even more important after Trump broke his earlier promise to make his tax returns public, as every other major party candidate has done for more than four decades, starting with President Richard Nixon when he was under audit.

Trump’s excuse—that he is being audited by the IRS—is as phony as the three-dollar bills Trump refers to in speeches. Besides which, Trump’s tax lawyers issued a letter saying audits of his returns for 2002 to 2008 were closed with no changes. So even by Trump’s own standard, no excuse exists for holding back those years or earlier ones, which would also be closed.

Trump says those returns will reveal nothing. That’s nonsense.

With a complete set of Trump income tax returns, I could calculate for readers the value of buildings he owns from the depreciation schedules; the deductions he has taken and what they mean; whether he makes charitable gifts (Trump says he is an “ardent philanthropist”) and to which charities; the income generated by each of his more than 600 entities; his gross income and taxable income, and how much income tax he has paid. (The average American pays 13.6 cents out of each dollar in federal income taxes, with those just below the 1 percent paying 18.4 percent and the top 1 percent paying 27 percent, IRS data show.)

But most importantly, the tax returns may also tell us about Trump’s involvement with Russian money. Trump wants you to believe he has no connections to Russia or Russian money. “I have nothing to do with Russia,” he said at a July 27 news conference.

Like many Trump statements, that simply is not true. For starters Trump sayshe was paid millions of dollars by Russians for holding the 2013 Miss Universe Pageant in Moscow. Trump owned the beauty contest, but sold it last year.

Trump boasted to Real Estate Weekly that in Moscow “almost all of the oligarchs were in the room” when he met with Putin’s rich friends while he was there for the pageant.

Trump has tried at least five times to build a Trump Tower in Moscow, including efforts he made during his 2013 trip there. His name is on a 47-story building in Georgia, formerly part of the Soviet empire.

We know that Russians are major buyers of Trump apartments because of public records. In addition, Donald Trump Jr. said in 2008 that “in terms of high-end product influx into the U.S., Russians make up a disproportionate cross-section of a lot of our assets. We see a lot of money pouring in from Russia.”

Russians are partners with Trump in a variety of American Trump projects. For some of these, Trump merely licensed the use of his name. But on others, he was an investment partner. Trump’s complete tax returns would show us to what extent Russians are a source of capital for projects with the Trump name on them and whether money was invested directly or funneled through others.

That brings us back to the Trump SoHo, and a man named Jody Kriss, who at the time was director of finance for Bayrock, the developer, and who has been accused in court proceedings from New York to the former Soviet republic of Georgia of running financial scams. Trump’s contract with Kriss, which the Beast has obtained, shows that Kriss was due 10 percent of the net profits in the deal.

Since its opening in 2010, the sleek high rise has generated a gross profit $227 million, according to accounting records on file in a Manhattan court. But Kriss claims he got nothing so he started asking Trump’s Russian partners for his share of the profits.

Kriss, in court papers, claimed in a Delaware court that when he started asking where his money was, he was threatened with being forced to return the $10,000 he had been paid each month for his financial administration and advice. Kriss, who under the terms of the contract says he was owed $7 million, said he was offered a settlement of $500,000, court records show. The Trump campaign did not respond to requests to tell Trump’s side of the story.

Those court papers show that Kriss says that was just the beginning of the efforts by Trump’s partners to intimidate him. Kriss identifies his antagonist in this as Felix Sater, a “senior adviser” to Trump who had a Trump Organization office and sometimes spells his name with two t’s. Kriss asserts that Sater and his partners never intended to honor his contract. Sater denies this.

In a sworn statement in the Delaware case, Kriss described what happened when he pressed for his money, which became tied up with a corrupt Icelandic financial organization known as FL Group, which had deep ties to Russian money before it collapsed in 2008. Others in the deal included Tevik Arif, a former Soviet official who made a fortune in business, and Alexander Mashkevich, a Kazakhstani billionaire who was accused by Belgian authoritiesof involvement in a long-running money laundering operation that he eventually settled with fines.

Kriss, in the Deleware case, gave his version of what happened when he asked that his Bayrock contract be honored:

“When I took it up with Bayrock, in the context of demanding my distributions from the $50 million, I was offered a small fraction (half a million) of the over $7 million I was entitled to and Felix Satter told me that the deal with FL prohibited me from getting the rest in that I could either take the money and shut up or risk being killed if I made trouble. I knew at that time Satter had served a prison sentence for first degree assault (stabbing someone in the face with a wine glass stem) and with learning what would soon become common knowledge, that Satter had had a decades-long involvement with the New York and Russian mafia and had just in 2007 been sued in a civil action in Phoenix.”

Bayrock has numerous ties to Russia as well and was involved in financing at least four Trump projects in which investors filed lawsuits alleging civil fraud. “Tax evasion and money-laundering are the core of Bayrock’s business model,” Kriss and others claim in an exhibit in an ongoing New York state lawsuit that describes Bayrock as a firm that does legitimate real-estate projects but also serves as a front for criminal activities.

Sater, in a statement about Kriss’s accusations, said, “I will not stoop to the level of this talentless coward and dignify his manufactured threats with a response.” Sater’s lawyer, Robert S. Wolf of the Moses & Singer law firm, called the Kriss claims “trash” and said they were “rejected by the court and his case was dismissed.”

The Delaware case Wolf referred to was dismissed, but only for lack of jurisdiction. A Delaware Chancery Court judge held that his court was not the proper forum for the case and also stated on the record that Kriss’s claims that he was due the money appeared to have merit.

Sallie Hofmeister, a spokesperson for Bayrock, said the firm regards Kriss’s claims as baseless and has asked a judge to dismiss a related lawsuit alleging that Bayrock is a racketeering enterprise.

Trump has said he wouldn’t recognize Sater if they were in the same room, yet photographs, video, and newspaper interviews show them together in two Colorado cities as well as Phoenix, Ft. Lauderdale, and Manhattan. Public records show more, including a document in which Trump signed off on the deal that resulted in the Trump SoHo profits going to Iceland—and simultaneously vanishing as taxable profits by converting the tax nature of the capital from profits to a loan.

In an email that I obtained, Julius Schwarz, an executive vice president and lawyer for Bayrock, referred to the Icelandic deal. Schwarz wrote that on a number of dates “the deal could not have closed, among them because of the risk of discovering Felix’s past… as well as major tax issues.” The deal did eventually close.

That email, testimony and other documents raise the question of whether Trump knew of Sater’s past as a violent felon and stock swindler or, if he did not know, what that says about his competence. They also raise the question of why he approved the deal with FL Group and what benefits it may have provided to him or the Trump Organization.

The court documents, whatever their merits, make it clear that Trump has had long, deep, and financially rewarding dealings with Sater, who orchestrated the Icelandic deal and has strong ties to Russian oligarchs.

That is just one of many reasons why voters should demand that Trump produce his complete tax returns going back many years (as Hillary Clinton has) or demand that Congress pass a law making public the tax returns of presidential nominees.

UPDATE 8/30/16: “The allegations made by Jody Kriss in the federal lawsuit are baseless and unsubstantiated,” Walter A. Saurack of Satterlee Stephens LLP, Bayrock’s attorney, said in a statement provided to The Daily Beast. “The allegations of tax fraud and money laundering, which this article quotes above, were abandoned by Mr. Kriss after a federal court as a sanction ordered many of the original allegations in his original complaint stricken. That partially stricken and defunct original complaint has been re-filed as an exhibit in a New York State qui tam lawsuit brought by Kriss’s former lawyers, who themselves are apparently under investigation by federal prosecutors for misbehavior related to Mr. Kriss’ federal lawsuit. Bayrock has filed a motion to dismiss in the federal lawsuit, and believes that both Mr. Kriss’ federal and his former attorneys’ state lawsuits will be dismissed.”