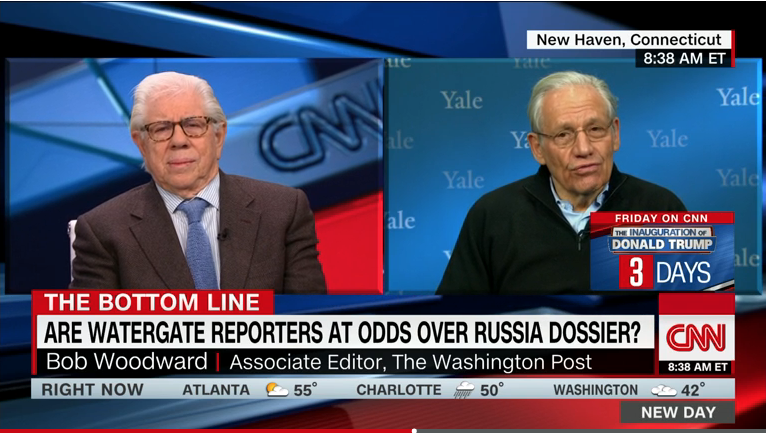 Legendary journalist Bob Woodward said that CNN’s reporting on a summary of classified information presented to Donald Trump was “exactly right” and it “clearly is news” that intelligence chiefs presented the information to the President-elect.

The classified documents presented last week to President Barack Obama and President-elect Trump included unsubstantiated allegations that Russian operatives claimed to have compromising personal and financial information about Trump, multiple US officials with direct knowledge of the briefings told CNN.

The allegations came, in part, from memos compiled by a former British intelligence operative, whose past work US intelligence officials consider credible.

Woodward made headlines over the weekend when he told “FOX News Sunday” that the dossier of unsubstantiated findings by the former British operative was a “garbage document.”

Asked by CNN’s Alisyn Camerota to explain his position, Woodward said, “I have read those 35 pages, and the quality is not good.” He said the intelligence community “tainted the good report they had on Russian hacking by including this, and they shouldn’t have done that.”

Woodward was joined for the interview by fellow award-winning Watergate scandal reporter, Carl Bernstein, a CNN Political contributor who co-bylined the original CNN report on the documents.
During the “New Day” interview, Woodward said of the CNN report, “I thought it was done in a very restrained, accurate way, and the CNN story said, look, we can’t substantiate any of this so we are not going to publish the details from it.”