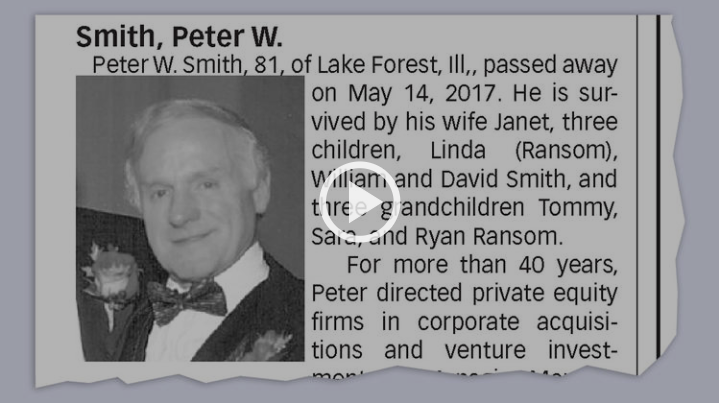 Days earlier, the financier from suburban Lake Forest gave an interview to the Journal about his quest, and it began publishing stories about his efforts in late June. The Journal also reported it had seen emails written by Smith showing his team considered retired Lt. Gen. Michael Flynn, then a top adviser to Republican Donald Trump‘s campaign, an ally. Flynn briefly was President Trump’s national security adviser and resigned after it was determined he had failed to disclose contacts with Russia.

At the time, the newspaper reported Smith’s May 14 death came about 10 days after he granted the interview. Mystery shrouded how and where he had died, but the lead reporter on the stories said on a podcast he had no reason to believe the death was the result of foul play and that Smith likely had died of natural causes.

However, the Chicago Tribune obtained a Minnesota state death record filed in Olmsted County saying Smith committed suicide in a hotel near the Mayo Clinic at 1:17 p.m. on Sunday, May 14. He was found with a bag over his head with a source of helium attached. A medical examiner’s report gives the same account, without specifying the time, and a report from Rochester police further details his suicide.

In the note recovered by police, Smith apologized to authorities and said that “NO FOUL PLAY WHATSOEVER” was involved in his death. He wrote that he was taking his own life because of a “RECENT BAD TURN IN HEALTH SINCE JANUARY, 2017” and timing related “TO LIFE INSURANCE OF $5 MILLION EXPIRING.” 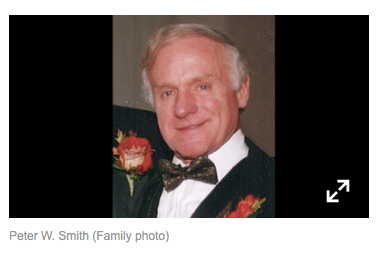 He had been staying at the hotel for several days and had extended his stay at least once but was expected to check out on the day his body was found. “Tomorrow is my last day,” Smith told a hotel worker on May 13 while he worked on a computer in the business center, printing documents, according to the police reports.

One of Smith’s former employees told the Tribune he thought the elderly man had gone to the famed clinic to be treated for a heart condition. Mayo spokeswoman Ginger Plumbo said Thursday she could not confirm Smith had been a patient, citing medical privacy laws.

The Journal stories said that on Labor Day weekend last year Smith assembled a team to acquire emails the team theorized might have been stolen from the private server Clinton had used while secretary of state. Smith’s focus was the more than 30,000 emails Clinton said she deleted because they related to personal matters. A huge cache of other Clinton emails were made public. 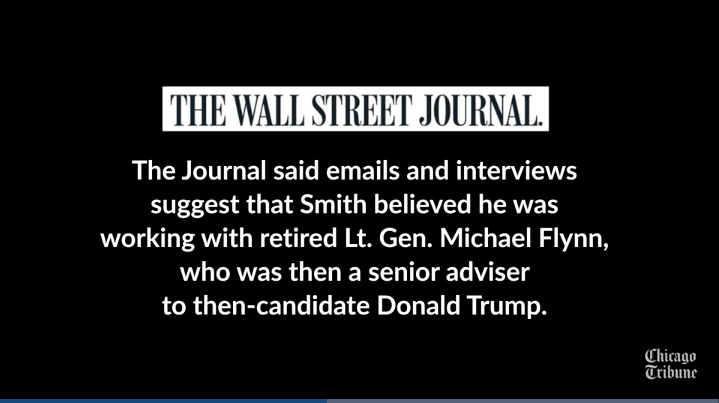 Smith had a history of doing opposition research, the formal term for unflattering information that political operatives dig up about rival candidates.

For years, former Democratic President Bill Clinton was Smith’s target. The wealthy businessman had a hand in exposing the “Troopergate” allegations about Bill Clinton’s sex life. And he discussed financing a probe of a 1969 trip Bill Clinton took while in college to the Soviet Union, according to Salon magazine.

Investigations into possible links between the Russian government and people associated with Trump’s presidential campaign are underway in Congress and by former FBI chief Robert Mueller. He is acting as a special counsel for the Department of Justice. Mueller spokesman Peter Carr declined to comment on the Journal’s stories on Smith or his death. Washington attorney Robert Kelner, who represents Flynn, had no comment Thursday.

Smith’s death occurred at the Aspen Suites in Rochester, records show. They list the cause of death as “asphyxiation due to displacement of oxygen in confined space with helium.” 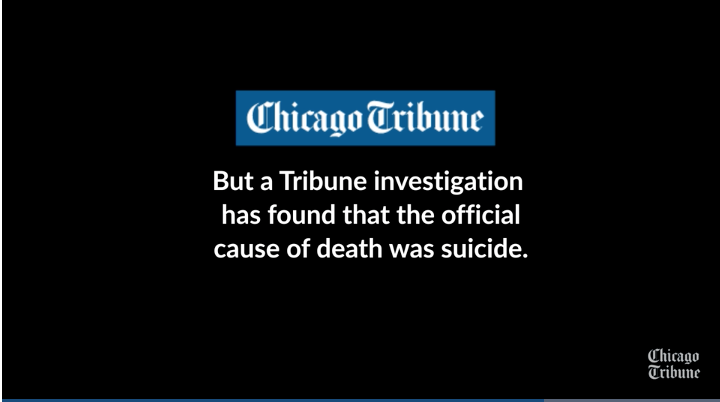 An employee with Rochester Cremation Services, the funeral home that responded to the hotel, said he helped remove Smith’s body from his room and recalled seeing a tank.

The employee, who spoke on condition he not be identified because of the sensitive nature of Smith’s death, described the tank as being similar in size to a propane tank on a gas grill. He did not recall seeing a bag that Smith would have placed over his head. He said the coroner and police were there and that he “didn’t do a lot of looking around.”

“When I got there and saw the tank, I thought, ‘I’ve seen this before,’ and was able to put two and two together,” the employee said.

An autopsy was conducted, according to the death record. The Southern Minnesota Regional Medical Examiner’s Office declined a Tribune request for the autopsy report and released limited information about Smith’s death. A spokeswoman for AXA Equitable Life Insurance Co., listed in documents recovered by police as Smith’s insurance carrier, had no immediate comment.

The Final Exit Network, a Florida-based nonprofit, provides information and support to people who suffer from a terminal illness and want to kill themselves. Fran Schindler, a volunteer with the group, noted that the best-selling book “Final Exit,” written by Derek Humphry in 1991 and revised several times since, explains in detail the helium gas method.

“Many people obtain that information from his book,” Schindler said. “It’s a method that has been around for many years and is well-known.”

According to figures from the Cook County medical examiner’s office, 172 people committed suicide by suffocation from January 2007 to date. Of those deaths from asphyxia, 15 involved the use of a plastic bag over the head.

It could not be determined how many also involved the use of helium, an odorless and tasteless gas that is nontoxic.

Police found a receipt from a local Walmart time-stamped from the previous day, May 13 at 12:53 p.m. The receipt was for the purchase of “Helium Jumbo” and other items. Police also noted that the two helium tanks in the room were draped with vinyl-covered exercise ankle or wrist weights. The report did not offer an explanation for the weights. Police said that because they did not suspect foul play, they had not viewed any security video from the Walmart store to confirm that Smith bought the tanks himself.

Smith’s remains were cremated in Minnesota, the records said. He was married to Janet L. Smith and had three children and three grandchildren, according to his obituary. Tribune calls to family members were not returned.

His obituary said Smith was involved in public affairs for more than 60 years and it heralded him as a “quietly generous champion of efforts to ensure a more economically and politically secure world.” Smith led private equity firms in corporate acquisitions and venture investments for more than 40 years. Earlier, he worked with DigaComm LLC from 1997 to 2014 and as the president of Peter W. Smith & Co. from 1975 to 1997. Before that, he was a senior officer of Field Enterprises Inc., a firm that then owned the Chicago Sun-Times and was held by the Marshall Field family, his obituary said.

A private family memorial was planned, the obituary said. Friends posted online tributes to Smith after his death. One was from his former employee, Jonathan Safron, 26, who lives in Chicago’s Loop and worked for Smith for about two years.

Safron, in an interview, said he was working for a tutoring firm when Smith became his client. His job entailed teaching Smith how to use a MacBook, Safron said. At the time Smith was living in a condominium atop the Four Seasons Hotel Chicago. Safron said Smith later employed him at Corporate Venture Alliances, a private investment firm that Smith ran, first out of the same condo and later from an office in the Hancock Building.

Safron, who said he had a low-level job with the Illinois Republican Party in 2014, said he had no knowledge of Smith’s bid to find hackers who could locate emails missing from Clinton’s service as secretary of state. In his online tribute to his former employer, he called Smith the “best boss I could ever ask for … a mentor, friend and model human being.”

Safron said he worked part time for Smith, putting in about 15 hours a week, but the two grew close, often having lunch together at a favorite Smith spot: the Oak Tree Restaurant & Bakery Chicago on North Michigan Avenue. He called Smith a serious man who was “upbeat,” “cosmopolitan” and “larger than life.” He was aware Smith was in declining health, saying the older man sometimes had difficulty breathing and told work colleagues he had heart problems. Weeks before he took his life, he had become fatigued walking down about four or five flights of stairs during a Hancock Building fire drill and later emailed Safron saying he was “dizzy,” he said.

Smith’s last will and testament, signed last Feb. 21, is seven pages long and on file in Probate Court in Lake County. The will gives his wife his interest in their residential property and his tangible personal property and says remaining assets should be placed into two trusts.

His late father, Waldo Sterling Smith, was a manufacturer’s representative for women’s apparel firms, representing them in department stores in Maine, New Hampshire and Vermont, according to the father’s 2002 obituary. The elder Smith died at age 92 in St. Augustine, Fla., and his obit noted that he had been active in St. Johns County, Fla., Republican affairs and with a local Methodist church.

Peter Smith wrote two blog posts dated the day before he was found dead. One challenged U.S. intelligence agency findings that Russia interfered with the 2016 election. Another post predicted: “As attention turns to international affairs, as it will shortly, the Russian interference story will die of its own weight.”

Katherine Skiba reported from Washington, David Heinzmann from Rochester and Todd Lighty from Chicago. Lauren Rosenblatt of the Tribune Washington Bureau and Jim Newton of the Lake County News-Sun and Gregory Pratt contributed to this story.