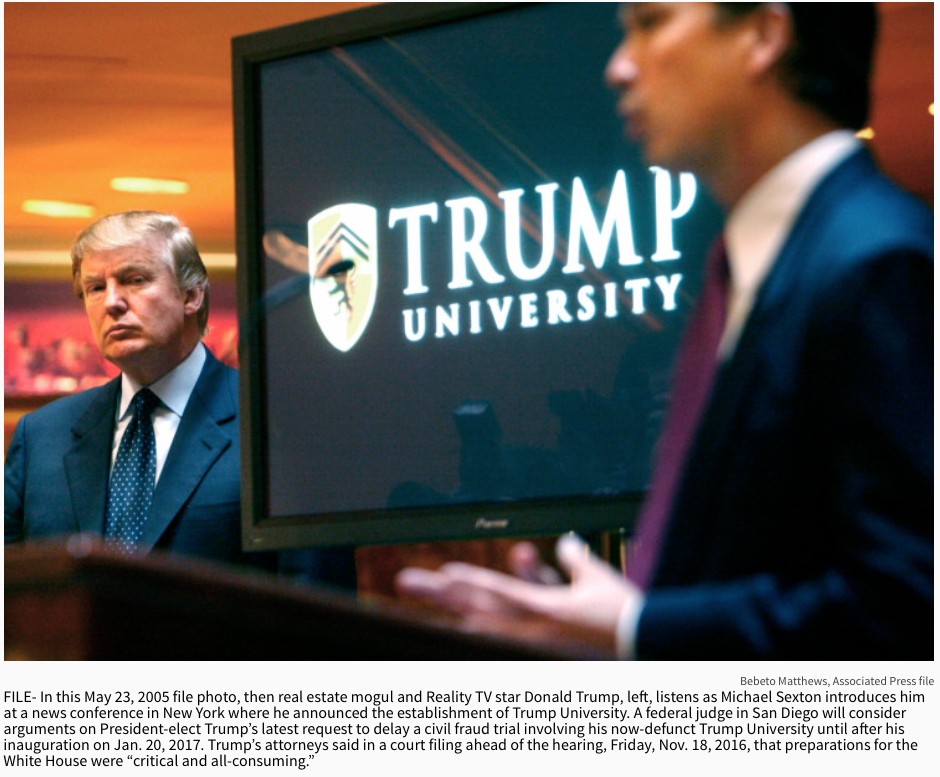 WASHINGTON — As a top aide to Florida’s attorney general, Carlos G. Muniz helped defend the office’s decision to sit out legal action against Trump University. Now the president is naming him to be the top lawyer in the U.S. Education Department.

CLICK IMAGE ABOVE for direct link to AP story.

President Donald Trump has announced his intent to nominate Muniz to serve as general counsel to Education Secretary Betsy DeVos. The Senate would then consider the nomination of the Republican lawyer.

Emails reviewed by The Associated Press show that in 2013 Muniz, who served as Florida Attorney General Pam Bondi’s chief of staff for three years, was included in discussions about student complaints alleging fraud with Trump’s namesake real-estate seminars.

Muniz, now in private practice, has also been the lead attorney defending Florida State University in a lawsuit by a former student who said the school failed to investigate after she said she was sexually assaulted by the star quarterback of the Seminoles’ 2013 national championship football team. The player was never charged with a crime by police in Tallahassee, and the state attorney’s office declined to pursue a criminal case against him.

An investigation by the Education Department’s Office of Civil Rights is still underway, presenting a potential conflict of interest if Muniz is confirmed.

Both Muniz and the White House declined to comment Tuesday, referring all questions to the Education Department.

The Education Department said in a statement to The Associated Press late Tuesday that its ethics officer will work with Muniz on identifying any potential conflict of interest “so that Mr. Muniz may recuse himself as appropriate if confirmed.”

“This effort will include a review of Mr. Muniz’s representation of Florida State University in any Title IX complaint or investigation,” the statement said.

AP reported last year that Bondi personally solicited a $25,000 political contribution from Trump as her office was weighing how to respond to questions from the Orlando Sentinel newspaper about whether she would join New York Attorney General Eric Schneiderman in suing the billionaire businessman.

Though both Trump University and the Florida-based Trump Institute had stopped offering classes by the time Bondi took office in 2011, more than 20 consumer complaints had been filed by former students who said they were swindled.

Emails from August 2013 obtained under Florida’s public records law showed that Muniz was copied on discussions about how to respond to the newspaper’s request for comment, though he did not actively weigh in.

Days after Bondi’s office said it was reviewing the Trump U case, a political committee supporting her re-election received a $25,000 check from Trump’s charitable foundation. His daughter, Ivanka Trump, also added $500 more to support Bondi.

Bondi, who endorsed Trump’s bid for president right before the Florida Republican primary, said she was unaware her staff had been asked about the New York lawsuit until a Florida newspaper columnist highlighted the 2013 donation from Trump.

Bondi has repeatedly denied any wrongdoing and defended her decision to accept the contribution, saying her office never seriously considered suing Trump.

Trump’s 2013 check, drawn on an account in the name of the Donald J. Trump Foundation, violated a federal prohibition against charities giving money to political groups. The issue garnered national media coverage last year during Trump’s presidential campaign, and his foundation paid a $2,500 fine to the IRS.

The illegal donation prompted a Massachusetts attorney last year to file a state bribery complaint against Bondi and Trump. A Florida prosecutor assigned to review the case informed Republican Gov. Rick Scott last week of his office’s conclusion that there was not enough evidence to move forward.

A memo about the complaint against Bondi said it was “insufficient on its face to conduct a criminal investigation” and was based almost entirely on media coverage. The assistant state attorney who wrote the memo said the complaint was based on insinuation and there was no evidence Bondi asked for the money in exchange for any official act. There was no indication she interviewed Trump or Bondi before reaching her decision.

Though Bondi’s office took no action against Trump, the president later agreed to settle the class-action case filed by New York and private lawyers, paying his former students $25 million in damages.

After leaving Bondi’s office, Muniz became a partner at the Jacksonville, Florida, office of a large law and lobbying firm. He defended Florida State University in a Title IX lawsuit filed by Erica Kinsman, a former student who said she was raped by quarterback Jameis Winston in 2012.

Kinsman sued Winston in April 2015 in federal civil court, alleging sexual battery and assault, and Winston countersued her one month later, alleging her accusations were false and defamatory. Both civil cases were settled in December under confidential terms. Winston, the No. 1 pick in the 2015 NFL draft, now plays for the Tampa Bay Buccaneers.

Title IX is a federal law that bans discrimination at schools that receive federal funding. The Education Department warned schools in 2011 of their legal responsibilities to immediately investigate allegations of sexual assault, even if a criminal investigation has not been concluded.

Last year, FSU agreed to pay Kinsman $950,000, the largest settlement ever for claims regarding a university’s indifference to a student’s reported sexual assault.