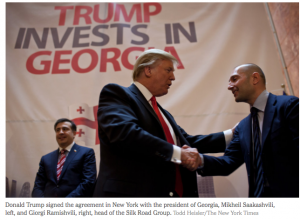 For Georgia’s president, it was a chance to show that his country, the former Soviet republic, is grand enough to attract the world’s best-known real estate developer. And for that developer, Donald J. Trump, it was yet another opportunity to demonstrate that he is world class.

In a ceremony with caviar and wine at Trump Tower in Manhattan on Thursday, Mr. Trump signed a deal to develop the two tallest towers in the republic of Georgia, the former Soviet state at the nexus of Eastern Europe and Western Asia.

Giving his blessing to the deal was Mikheil Saakashvili, the flamboyant, English-speaking president of Georgia. Mr. Saakashvili is eager to attract foreign investment as he tries to yank his impoverished country from the Russian orbit and align it more closely with the United States.

Mr. Trump, the world’s first virtual developer, will not actually build the towers. At this point in his career, he is more inclined to license use of the Trump name on someone else’s building than develop a property himself — although he still occasionally erects skyscrapers, like Trump World Tower in New York.

Mainly, the deal is another chance to extend the global reach of the Trump brand, whose brassy gold letters are already stamped on buildings on four continents, as well as a long-running television program, a Scottish golf course, vodka, chocolate, books and jewelry. (The signing ceremony was held at the bottom of the Trump Tower’s four-level atrium, where the surrounding shops include Trump Grill, Trump Bar and a Trump t-shirt stand.)

Any actual construction, if it begins as scheduled in 2013, would be overseen by Giorgi Ramishvili, chairman of the Silk Road Group, one of the largest private investment companies in the south Caucasus region.

The deal, which the partners estimate at $300 million, calls for two projects. The Trump Tower Tbilisi would go up on Rose Revolution Square in Georgia’s capital. The Trump Riviera would be part of a planned Silk Road complex that includes a casino, an exhibition hall and a marina, in the resort city of Batumi on the Black Sea, near Turkey.

The residential buildings will each contain 100 apartments and rise nearly 40 stories — average by New York standards, but nearly twice the size of the republic’s tallest structures.

The partnership was born of a two-year friendship between Mr. Trump and Mr. Saakashvili.

The Georgian president sought out Mr. Trump during a trip to New York after reading Mr. Trump’s 2008 book “Trump Never Gives Up.” The men formed a friendship, and last year Mr. Trump sent an executive, Michael Cohen, to Georgia to consider working with Silk Road on several projects.

Mr. Saakashvili said in an interview that although Mr. Trump was sometimes criticized as being self-centered, he found him “intellectually curious” and knowledgeable about Georgia and its region. “I think Donald Trump has amazing intuition,” he said.

Mr. Saakashvili himself is known for a gregarious style. Elected president in 2004, he is a staunch American ally. At one point Georgia contributed the third-largest force to the mission in Iraq, after the United States and Great Britain. A street in the capital is named after George W. Bush.

After tamping down corruption in the police, Mr. Saakashvili built a new ministry of interior building, designed by the Italian architect Michele De Lucchi, with an all-glass facade to symbolize transparency. Now, all new police stations in Georgia are made of glass, too.

And he has lavished attention on the resort town of Batumi, where 35 hotels have gone up in the last four years. In 2007, to inaugurate a new amusement park in the town, Mr. Saakashvili and his young presidential staff rode the carnival rides themselves.

In Georgia, Mr. Trump will license his name, and his company will manage the two properties. He will also work with Silk Road to line up financing for the projects and market the towers. Mr. Trump said that so far he had no plans to put his own cash into the deal. “We’ll decide whether or not we want to invest,” he said.

Mr. Saakashvili has been eager to draw celebrity foreign investors to show Georgia is again open for business, after the global recession and a war with Russia in 2008 dried up the foreign direct investment that had been propelling the economy.

Before the Russian war, Georgia had attracted about $2 billion a year in foreign investment. Mr. Saakashvili welcomed the inflow as an endorsement of his pro-Western reforms.

During the crisis, Georgia pivoted to work with Middle Eastern investors like the sovereign wealth fund of Ras al-Khaimah, one of the United Arab Emirates. That fund bought the Georgian port of Poti on the coast just north of the site of Mr. Trump’s planned tower in Batumi.

Georgia has squeaked by with foreign aid donated after the war by the United States and European countries. But with the new deal, Mr. Saakashvili is sure to try to use the Trump imprimatur to encourage other American investors to put money in the tourism and transportation projects he sees as the future of his country’s economy.

While Mr. Trump is the first large American developer to come to Georgia, some locals have worked with American partners or financing from United States banks, Irakli Matkava, a deputy minister of economy, said in a telephone interview.

Silk Road, which recently opened the Radisson Tbilisi hotel in the capital, expects to open another hotel, the Batumi Radisson this summer. Tourism is a relative new field for Silk Road, which is a major fuel trader and transporter, and also the largest Internet provider in Georgia. The company also has a contract to move American military equipment to Afghanistan from Iraq.

The Georgians seem to have had their eye on the Trump clan for some time. Two years ago, Giorgi Rtskhiladze, an assistant to the chairman of Silk Road, invited Mr. Trump’s Czech-born ex-wife, Ivana Trump, to Georgia to consider investing there.

She visited Batumi and met with President Saakashvili during her stay. It was a tough decision, Mr. Rtskhiladze said, and although Mr. Trump has yet to visit the country, “we went with the husband.”

Correction: March 10, 2011
An earlier version of this article misidentified Giorgi Rtskhiladze as an aide to the president of Georgia.